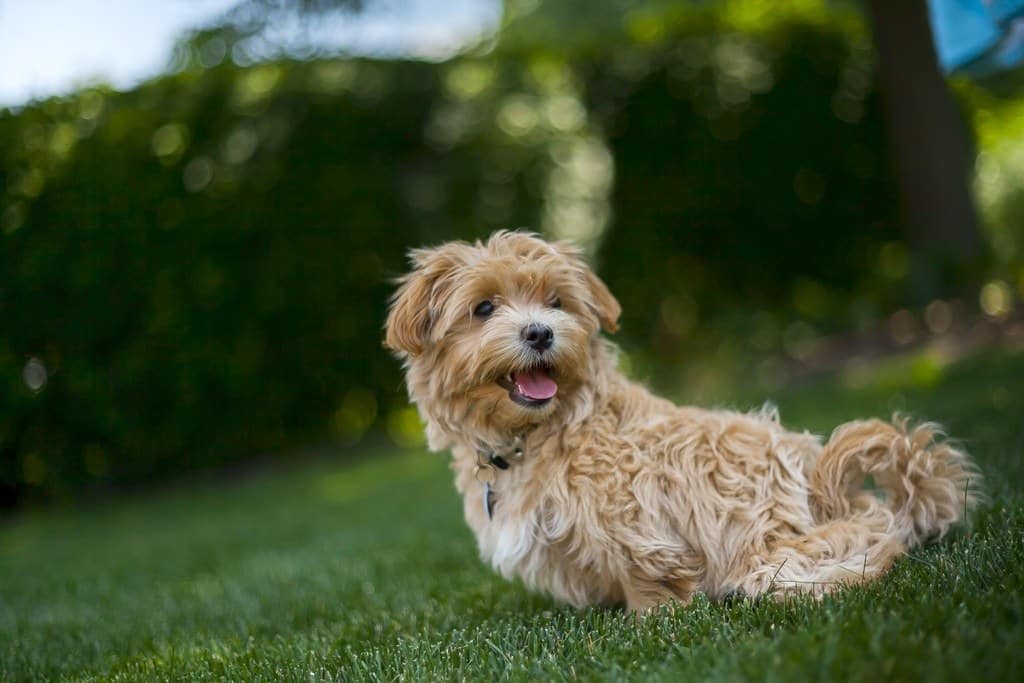 You may not have heard of the Lhasapoo before, but this little hybrid dog has won the hearts of many in recent years. Created by crossing a Lhasa Apso with a Poodle, the Lhasapoo is emotionally intelligent, adaptable, and built for years of companionship.

While the Poodle has been one of America’s most popular dog breeds for years, few people are intimately familiar with the Lhasa Apso. This regal breed was bred centuries ago in Tibet as a guard dog for palaces and monasteries. Because of its history, the Lhasa Apso is often associated with Buddhists, including the Dalai Lama.

Despite the Lhasapoo’s favorable traits, the hybrid breed is still relatively rare in the United States, especially when compared to other designer dogs like the Labradoodle. Still, there are plenty of reasons for their loving, loyal fanbase!

Lhasapoo Puppies — Before You Get One…

Before you run out to choose a Lhasapoo puppy of your own, it’s important to understand the process of buying or adopting a hybrid breed. Lhasapoos, like many hybrid dogs, are highly sought after for many reasons. However, they are not necessarily better than a purebred or a true mutt.

First, most leading dog breeding organizations do not recognize crossbreeds. This might not bother you personally, but it can make finding a reputable breeder much more difficult. Second, despite what many breeders claim, crossbreeds aren’t guaranteed to be healthier than purebreds. In fact, because of the lack of regulation, genetic health problems may be more common in these dogs.

But don’t let this scare you away from bringing home one of these fluffy little pups! As long as you do your research — just like you would when choosing a purebred dog — finding a healthy, ethically bred Lhasapoo is possible!

3 Little-Known Facts About the Lhasapoo

1. One of their parent breed’s name comes from the Tibetan capital.

The capital city of Tibet is Lhasa, which is where Lhasa Apso comes from. But, we aren’t entirely sure where the Apso comes from, though there are a couple of good theories.

2. They have long lifespans.

Both of the parent breeds are known to live quite long, so blended together, you can have a family pet around for ages. The oldest Lhasa Apso on record was 29 years old when he passed, and. the oldest poodle recorded lived between 24-26 years (the owners lost exact count).

3. They are great for seniors.

Though they are adaptable and will fit in with any family, the Lhasapoo is a great breed for seniors that live in smaller dwellings or apartments.

Temperament & Intelligence of the Lhasapoo 🧠

With the Poodle as one of its parent breeds, it should come as no surprise that the Lhasapoo is known for its brains. Unlike many intelligent breeds, though, the Lhasapoo shows off its brains through companionship rather than by completing tasks. Chances are, your Lhasapoo will gain just as much pleasure from lounging with you on the couch as it would from completing a round of fanciful tricks.

On the flip side, this need for companionship makes the Lhasapoo extremely prone to separation anxiety. Since these dogs are so connected to their favorite humans, doggy daycare and professional dog walkers often aren’t effective substitutes for their family. Prospective owners who are regularly out of the home for a full workday should consider if their lifestyle is appropriate for the Lhasapoo’s needs.

If you’re someone who dislikes the yappy stereotype of many small dogs, then the Lhasapoo might not be the best choice. Since the Lhasa Apso was bred and used as a guard dog for centuries, most Lhasapoos have the need to protect and alert deeply ingrained in their DNA! Early socialization with strangers may lessen this behavior, but you shouldn’t count on training it out entirely.

One of the Lhasapoo’s standout traits is their adaptability. These dogs thrive in countless environments, from apartment-living with a single retiree to life in a suburban home with a large family.

Generally, Lhasapoos get along great with children of all ages. The crossbreed’s joyful, loving personality makes them a perfect match for children old enough to respectfully play with smaller dogs. Lhasapoos can get along with young children as well, but playtime should always be supervised by an adult.

Though it’s true that the Lhasapoo is well-suited to family life, all dogs are unique. We always suggest gauging your new dog’s comfort level and using socialization strategies from an early age. Never just throw your Lhasapoo puppy into a room of children and hope for the best!

With gradual introduction, Lhasapoos can do well in a multi-pet household. But it’s not their preferred environment.

For most Lhasapoos, their human family is the center of their world — other pets are just a nuisance. While Lhasapoos aren’t known to attack other pets, living with another dog or cat could make them feel anxious or like they have to compete for attention.

If you already own a dog or cat, another dog breed may be a better fit for your home.

Things to Know When Owning a Lhasapoo

Of course, you should never commit to any type of dog before learning about its care and lifelong needs. Here’s what you should know about the Lhasapoo before deciding if it’s the ideal dog for you.

Lhasapoos are small and burn minimal energy in their day-to-day lives. On average, these dogs need approximately 1 cup of dry food per day (split into multiple small meals).

Please remember that this is just a broad recommendation. You should always refer to your dog’s specific formula for feeding guidelines.

If you have any concerns about your dog’s weight, appetite, or digestion, we recommend scheduling a time to speak with your veterinarian. They will be able to make specific recommendations based on your dog’s overall health.

The recommended daily exercise for a Lhasapoo is about 60 minutes of moderate activity. Short walks are the best way to meet this requirement. Spurts of indoor play throughout the day can meet your Lhasapoo’s needs when you can’t get outside for more structured exercise.

In many cases, keeping a Lhasapoo active is more about their mental than physical wellbeing, and boredom can quickly transform into destructive behavior (something no dog owner wants!). Aside from full-on physical play, chew toys are an excellent way to calm the breed’s nervous energy without overdoing the exercise.

For the Lhasapoo, training seems to be a mixed grab bag. While this hybrid breed often inherits the Poodle’s sharp brain, it doesn’t always respond to structured training. On the other hand, many Lhasapoos excel at canine sports like agility and obedience.

Regardless of your dog’s willingness to learn and perform tricks, basic socialization and obedience training is a must. If this is your first dog or you just don’t know where to start, finding a licensed dog trainer in your area can make the process much easier!

Both the Lhasa Apso and the Poodle are known for show-stopping coats, so you should expect the same from your Lhasapoo. Which type of coat your dog ends up with, however, is entirely dependent on their individual genetics.

If your Lhasapoo’s coat takes after the Poodle side, their fur will be curled and dense. If they trend toward the Lhasa Apso side, it will instead be extremely long and silky. Some dogs might even display a mixture of these coat types.

Though it’s true that the Lhasapoo’s coat is high-maintenance, it doesn’t need to be a time-sucking chore. The Lhasapoo’s natural coat requires daily brushing, but regular trims can tame unruly fur and prevent mats.

As mentioned earlier, hybrid dog breeds are prone to just as many health concerns as their purebred parents. In many cases, these dogs actually take on the genetic problems of both breeds, resulting in a long list of potential medical conditions.

Some breeders and fans of these dogs will claim that they are healthier than other breeds. We suggest avoiding any breeders who make claims about their dogs’ health without providing veterinary records as proof.

When it comes to the Lhasapoo, here are the most common medical conditions seen in the crossbreed:

As with any dog, some owners might choose a male or female Lhasapoo because of the basic physiological differences. For example, male dogs are more likely to mark around the home or yard (but this can be prevented with training and supervision). On the other hand, female dogs will regularly go into heat until spayed.

Otherwise, our research found no clear-cut differences between male and female Lhasapoos. Physically, males may be slightly bigger and heavier than their female counterparts. Personality differences are more likely based on the individual dog rather than its sex.

Is it worth seeking out a Lhasapoo over any other small breed? That depends on what you’re looking for from a dog!

Overall, the Lhasapoo is an excellent dog for people young and old — even those who live in small urban apartments. They require little space to thrive, instead getting out their excess energy by playing with or chewing on toys. At the same time, their intelligence and affection make them an ever-present companion who will never let their humans feel lonely.

If the Lhasapoo checks all your boxes and you’re willing to put in the extra work to find one of these hybrid dogs, then we see no reason to go with any other breed. But if you would be just as happy with any small, doting canine companion, then it might be worth checking out your local rescue organization instead.

Have you ever met a Lhasapoo? What did you think of this personality-filled designer breed? Let us know in the comments below!