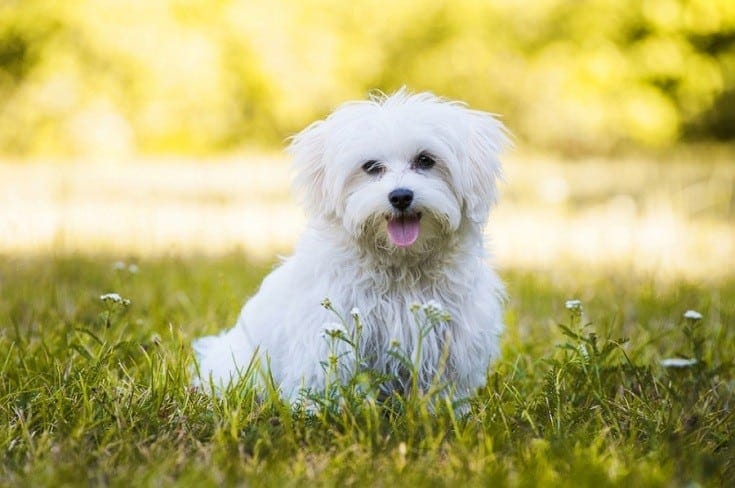 The Maltese dog breed is very popular due to its coverage in long straight long hair as well as its small size. It is adaptable, fearless, and stubborn. It doesn’t shed, and it has a long lifespan, so it’s a perfect choice as a parent for a mixed breed.

We’ve gathered our resources together to compose a list of breeds that use the Maltese breed as a parent. Join us as we go over that list with you and will supply some extra facts about each breed so you can learn a little more about them. We’ve also included pictures so you can see how they look. Here are the most popular Maltese mixes you should know:

Here’s our list of breeds that use the Maltese as one of the parents.

The Ratese is a very friendly but curious dog that you will always find under your feet. It’s a mix of the Maltese and the American Rat Terrier. It stands a little under a foot and a half tall and can weigh up to 25 pounds what is usually much less. It’s an active and intelligent dog that’s great for families that don’t have any toddlers, as these tend to upset the dog.

The Malteagle Is well known as a dog that likes to sit on your lap. It’s created by mixing a Maltese with a Beagle. It can live as long as 15 years and usually stands just under a foot tall. It’s perfect for first-time pet owners, and it gets along well with children and the elderly.

Maltichon is a mix of Maltese and Bichon. This dog usually stands a little under a foot tall and weighs about 10 pounds. It’s a fluffy dog with hairy facial features and often lives for about 15 years. It is a smart dog that likes to clown around, but it can develop some allergies to certain foods.

The Cairmal is a mix between the Maltese and the Cairn Terrier. These are intelligent and extremely active dogs that can also be quite stubborn. This breed stands a little taller than a foot and can weigh from 10 to 15 pounds. It has a thick coat, but it’s not difficult to maintain, and it doesn’t shed.

The Cavamalt is intelligent and easy to train, so it’s perfect for first-time pet owners. It’s perfectly at home in a small apartment as well as in a large house. They don’t shed much but require consistent grooming to keep them tangle and mat-free.

The Malton is a mix of the Maltese and the Cavachon, which itself is a mix of the Cavalier King Charles Spaniel and a Bichon Frise. This dog stands a little under one-foot tall and has a long hair coat that doesn’t shed. It also has one of the longer lifespans and can live up to 16 years, and it’s easy to train, so it’s perfect for new pet owners.

The Malchi breed is one of the more difficult breeds to predict how the offspring will look. The Malchi is a mix of the Maltese and a Chihuahua. Since these dogs look very different from each other, the offspring can have a wide range of traits. However, most dogs are loyal and affectionate. They typically stand a little over one-foot tall and can weigh as little as five pounds.

The Crested Malt is a somewhat rare dog that is a mix of the Maltese and Chinese Crested breeds. These dogs have long hair that hangs over their eyes in teddy-bear like ears. They’re friendly, kind, and hypoallergenic.

The Silky Cocker is a mixed breed created by the Maltese and the Cocker Spaniel. These dogs have giant eyes and are extremely friendly. They make great companions for a single person or an entire family, and they adapt easily to small apartments or large homes.

The Cotonese Is eager to please and extremely affectionate. This breed is a mix of Maltese and Coton de Tulear. Their coat is usually light-colored, very soft, and doesn’t shed. It is easy to train, and it enjoys it jumping and climbing, but also likes to relax on the couch or by her feet watching TV.

Mauxie is a Maltese and Dachshund mix. It’s a little shorter than many of the other breeds on this list and usually only stands between 8 and 10 inches tall. Many people describe them as troublemakers and hyperactive, so it’s best to socialize them with others at an early age. Their coat can vary in length and color depending on which parent they take after.

The Sheptese is also known as Malshsep, and it’s a mix of the Maltese and the German Shepherd. Because of the size difference between the parents, there is an element of danger involved with breeding. This danger can raise the cost of the puppies significantly. The Sheptese is usually brown or chocolate, and they can weigh up to 60 pounds. Its temperament will vary depending on which parent it takes after more.

The Havamalt is sometimes called the Havatese, and it is a mix between the Maltese and the Havanese. This breed stands about a foot tall and can weigh up to 17 pounds. It has a thick double coat that requires a lot of grooming, but it doesn’t shed. They’re affectionate, crave companionship, and can become destructive if left alone for too long.

The Jatese is a mix of Maltese and Japanese Chin. It’s an extremely playful dog that rarely reaches 12 inches tall. Their coat is silky and requires regular baths. The Jatese Can get very vocal if they don’t get their way, and they also tend to suffer from separation anxiety If left alone for too long, which can cause them to become destructive.

The Lhatese stands about one-foot tall, and it is created by mixing the Maltese with the Lhasa Apso. It does not shed but requires continuous grooming to keep the hair tangle-free. They’re friendly, playful, and make great watchdogs.

The Malti Pin is sometimes called a Maltese Pin, and it is a mix of the Maltese and a Miniature Pinscher. This breed stands a little over a foot and can live up to 16 years. Their coat is unpredictable and depends on which parent they take after. The Malti Pin Does not like to share attention with other members of the family or other pets, so they are best suited to a single owner or the elderly.

The Mauzer is created by mixing the Maltese with a Miniature Schnauzer. This breed is one of the taller ones on this list, and dogs can reach up to 14 inches high. It can weigh up to 20 pounds, and it may or may not have a beard. The Mauzer Is a loving but protective breed.

The Papitese is a mix between the Maltese and the Papillon. This breed can be aggressive and wary of strangers. They get very excited when one comes around, and they could get aggressive. They don’t require too many baths and enjoy spending time at your feet.

The Peke-A-Tese are fun dogs with a lot of energy. They have a long, dense coat that requires daily brushing but doesn’t shed. It is an independent breed with a unique personality that can be feisty and temperamental.

The Maltipoo is created by mixing a Maltese with a Poodle. This breed varies in height from 8 to 14 inches tall and can also weigh up to 20 pounds. The coat can be curly or wavy and will require continuous brushing.

If you are considering purchasing one of these Maltese mixed breeds, we highly recommend the Papatese, or another breed we’ve specifically mentioned is good for beginners. None of these dogs are aggressive or bold, but they can present a training challenge to those who are inexperienced. An experienced keeper will not only be able to train these dogs, but they will also be able to socialize them when they’re young, so they get along better with other pets and family members.

Pros and Cons of Fixing a Male Dog

Can Dogs Eat Apricots? What You Need to Know!