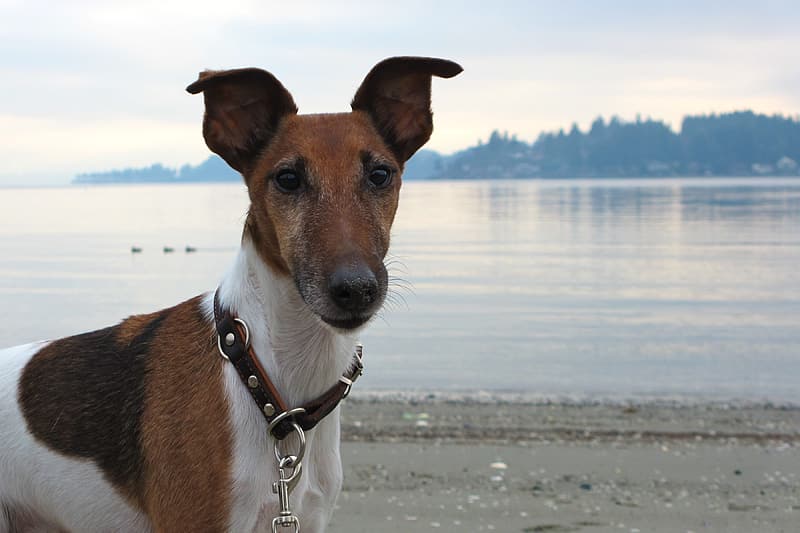 What do you get when you cross the strongmindedness of the Scottish Terrier with the exuberance of the Toy Fox Terrier? The Mini Scottish Fox Terrier, of course! This playful pooch can bring a lot to your home from his fierce loyalty to his intelligence to his spirited antics. That’s saying nothing about how unbelievably cute he is, too.

The small size of the Mini Scottish Fox Terrier makes him an excellent choice for apartment dwellers. The hunting history of the parent breeds lends alertness to his personality as an outstanding watchdog. Don’t let his petite profile fool you. He is tough. What else can you say about a dog with the nickname, Diehard?

Mini Scottish Fox Terrier Puppies – Before You Get One

Both the Scottie and the Toy Fox Terrier love people. That explains their loyalty to their families. It also means that they don’t tolerate being alone well. You may think it ironic, given the independent nature of the Scottish Terrier. The truth is that he is a softie inside. He wants and needs your attention. He is not a pet to leave in the backyard to amuse himself.

The Mini Scottish Fox Terrier is quite intelligent, if just mildly aloof at times. It’s easy to believe that he’s always thinking about something when he looks at you with cute brown eyes. That’s a good thing when it comes to training. However, this pooch can get bored if there isn’t a lot of activity. He loves to play and enjoys an exciting game of fetch.

1. Smooth Fox Terrier Breeders Selectively Bred Them for Temperament and Their Small Size

Like many of its class, the Smooth Fox Terrier is a feisty pooch. Breeders saw the potential for a more diminutive version. Crossbreeding with other small dogs resulted in a more easygoing and petite pet. The American Kennel Club (AKC) officially recognized the Toy Fox Terrier in 2003.

2. The Toy Fox Terrier Is So Smart That It Joined the Circus

Intelligence is one of the many hallmarks of terriers. They learn quickly, making them easy to train. These qualities gave them what they needed to take their act on the road with the circus. Today, these talented dogs compete on the national circuit of the AKC in Agility Sports.

3. The Scottish Terrier Has Had Many Fans in High Places

The Scottish Terrier has an unmistakable presence around him. It’s hard not to be taken in by his charm and bravado. At least, that’s what many famous people thought through the years, including George W. Bush, Franklin D. Roosevelt, Jacqueline Kennedy Onassis, Bette Davis, and Humphrey Bogart.

The Mini Scottish Fox Terrier is intelligent, receiving this trait from both his parents. Along with it comes willfullness that can make training a challenge. The Scottie in him is slow to warm up to strangers, while the Toy Fox Terrier is more gregarious. As a Terrier, you’ll know if he has something to say, with a tendency to bark coming from both sides.

Loyalty is one of the many endearing traits of the Mini Scottish Fox Terrier. He is affectionate with his family. While he is kid-friendly, he’ll do better in homes with older children as opposed to toddlers. His high energy levels and intensity might frighten some little ones. The Scottie in him has a moderate tendency to nip if he gets scared.

Both breeds began life as hunters, albeit, for different pests. Scotties tackled badgers and foxes, while Fox Terriers went after rodents and snakes. That fact gives them a strong prey drive to chase anything that runs from them. It also fuels their wanderlust to see it through to the end. The Mini Scottish Fox Terrier is moderately tolerant of other dogs. He’ll do best if he is the only pet.

Things to Know When Owning a Mini Scottish Fox Terrier:

Perhaps because of his high energy, the Mini Scottish Fox Terrier is a relatively healthy dog, especially if he gets enough exercise and me-time with you. Some requirements for the hybrid are universal for small breeds. Others depend on which parent breed is more dominant. Let’s do a deep dive into their histories and what they need to be happy in your home.

The Mini Scottish Fox Terrier doesn’t have a high potential for weight gain. That’s probably because he’s running after the squirrels and rabbits in your backyard. Nevertheless, we suggest keeping him on a regular diet with three small meals per day as a puppy. Smaller breeds grow faster and mature more quickly. That means they will use up their energy stores swiftly and replenishment.

As adults, you can cut it back to two meals. However, we’d still recommend monitoring his weight and adjusting his diet accordingly. Also, treats will work best as a training aid than a snack between feedings.

Adequate exercise is imperative for the mental and physical health of the Mini Scottish Fox Terriers. Apartment dwellers should plan on at least one, preferably two, daily walks. They may pull when you first start leash-training them. After all, your pooch will bring a youthful enthusiasm to everything he does.

Early socialization is paramount to raising a Mini Scottish Fox Terrier. It’s vital for building trust and showing him who is the boss in the family. Because of Scottie’s aloofness, it will also help him get along with other people and dogs better. This pup is an independent thinker. You must be proactive in teaching him good manners and preventing bad habits like barking.

On the positive front, Mini Scottish Fox Terrier is intelligent and quite capable of learning new things. The Toy Fox Terrier in him also brings an eagerness to please, which should make training easier for you.

You can expect a moderate amount of shedding with the Mini Scottish Fox Terrier. How much grooming you must do depends on the dominant breed. You can brush the smooth coat of the Toy Fox Terrier with a grooming glove occasionally. If it’s more like the Scottie, you must use a more substantial brush to get to his dense undercoat. The classic profile of this breed means professional grooming.

In any case, we recommend handling his paws and ears frequently. You may need to pull fur from the latter sometimes to prevent ear infections.

Both parent breeds are relatively healthy. However, there are several genetic conditions for which we recommend health screenings before you buy a pet. We strongly urge you to get Orthopedic Foundation for Animals (OFA) evaluations and testing for both von Willebrand’s Disease and Patellar Luxation because of their higher propensity in these dogs.

Scotties are also susceptible to an odd neurological disorder called Scottie cramp. Dogs that get stressed sometimes behave strangely with muscle spasms and appear to experience cramping. Rest assured that it isn’t painful. Some pups learn to live with it and lead normal lives. Your veterinarian may also prescribe drugs to control it.

The main difference in the two sexes is size, and that isn’t a lot, compared to larger breeds. Male and female Mini Scottish Fox Terriers are equally affectionate. It all comes down to socialization and training. A well-loved pet is less likely to become aggressive. It’s also a matter of breeding. Neutering a male is considerably less expensive than spaying a female, i.e., unless you want a litter or two.

The Mini Scottish Fox Terrier brings all the lovable qualities of these two breeds in one adorable and small package. Their intelligence and independence make pet ownership more like a relationship than a dog and his owner. While he may challenge you sometimes, he is also sure to entertain you with his quick ability to learn new tricks and eagerness to playful.

All the Mini Scottish Fox Terrier asks in return is regular exercise and plenty of affection. You’ll likely find that no other dog will provide you with as much joy and loyalty.