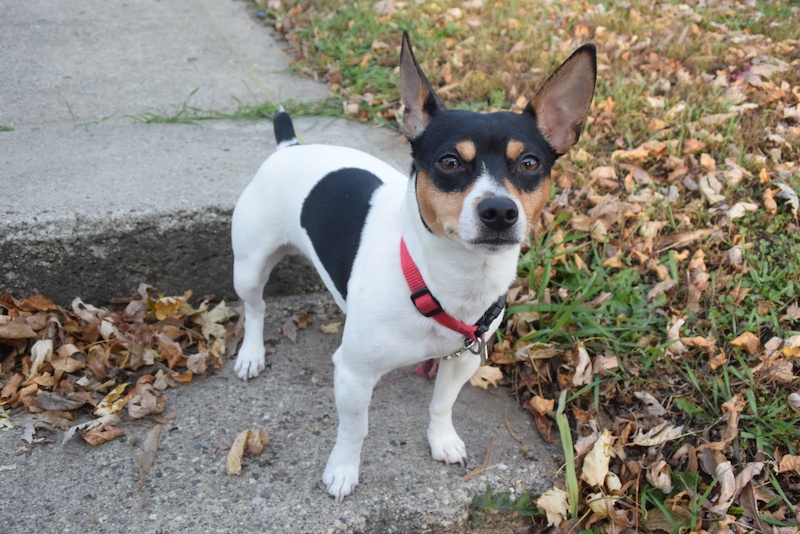 The Teddy Roosevelt Terrier is similar to the American Rat Terrier, except it’s a bit larger and more muscular. These dogs were bred to serve on farms, and they can do a little bit of everything, including eliminate pests, watch over property, and hunt game.

Despite their relatively diminutive size, these dogs are absolutely fearless, just like their namesake. However, they’re not quite as well-known, so if you’d like to learn more about these rugged animals, the guide below will fill you in on everything you need to know.

Teddy Roosevelt Terrier Puppies — Before You Welcome One Into Your Family…

Teddy Roosevelt Terriers are fun and adorable dogs, but they’re not for everyone. It’s important to remember that they were bred for use on farms, so they may not be the best choice for cramped apartments.

They can be a bit of a handful, but they’re more than worth it, as they’re goofy and lovable. That doesn’t mean you should bring one home without doing your research, though. If you’re not prepared for the demands these dogs will make on your lifestyle, the partnership might not work out for either one of you.

1. Teddy Roosevelt Likely Never Actually Owned One of These Dogs

The breed that bears his name never had the pleasure of his company. In fact, Roosevelt never owned any sort of Rat Terrier nor did he play any role in the breed’s development.

He did own a Manchester Terrier named Jack, however. He also owned another dog named Scamp that was used for hunting rats at the White House; because of this, many people believe that he owned Rat Terriers. No one knows what kind of pooch Scamp was, though.

Teddy Roosevelt Terriers are great at finding truffles. Their incredible sense of smell allows them to dig up black truffles with ease, even when they’re buried several feet underground.

Of course, this also means they’re great at finding just about anything that hides underground, so don’t be surprised if your pup brings home a rat or a gopher every now and then.

These dogs aren’t considered fully mature until they reach two or three years of age. As a result, they retain their playful puppy spirit longer than many other breeds.

The downside to this is that training can be a pain. They’d rather play than do anything else, but with enough time and dedication, these pups can be taught to do just about anything.

Teddy Roosevelt Terriers are fun-loving and affectionate, and they’re always up for a game. They absolutely love to be around their humans and will often shadow them everywhere they go.

Despite their amiable and welcoming nature, they’re natural guard dogs. They’ll sound the alarm if anyone breaks in, and they won’t back down from an intruder. This is a dog that will give their life to protect you without a second thought.

They’re smart and single-minded. If they decide to track or hunt something, it’s nearly impossible to get them to give up. As a result, you may have issues training them if you can’t fully engage their attention.

These dogs are also prone to getting into mischief. They love to dig, and they’ll make their own fun, even if that means taking apart your furniture. It’s essential to keep them exhausted and occupied.

The good news is that they’ll keep your backyard free of almost any vermin you can think of. Rats, gophers, squirrels, and other small animals don’t stand a chance against these determined hunters.

Teddy Roosevelt Terriers love people of all ages. They get along famously with children, as they have a truly bottomless appetite for play. Their boundless energy levels allow them to keep up with little ones all day long as well.

They tend to shadow their humans everywhere they go, so they can make excellent chaperones for little ones.

These terriers are small enough that toddlers can pet them easily, and they know how to temper their play style to the appropriate level for their companions.

It’s best if they’re raised with children rather than brought in as mature adults, however. They can be territorial and protective of their primary owner, which may cause problems as they adjust to their new surroundings.

Teddy Roosevelt Terriers may not be ideal for older or single owners, however, as giving them the stimulation they need can sometimes be an enormous task. They thrive when they have multiple people to play with or a demanding job to do.

These pups usually tolerate other dogs well, especially if they’ve been raised with them. Any aggression problems can be mitigated by spaying or neutering them when they’re still young.

Their territorial nature means they may not be friendly toward strange dogs, however. It’s best to keep them securely fenced-in, and always keep them on a leash in public. They may not do well in dog parks either, as they’ll likely spend more time guarding their humans than playing with friends.

If you train and socialize them extensively, they may be able to coexist with cats, gerbils, and other small critters. However, keep in mind that they were bred to hunt little animals like those, and it will take quite a bit of effort to overcome their natural programming. It’s probably best not to risk it.

Things to Know When Owning a Teddy Roosevelt Terrier

Teddy Roosevelt Terriers are similar to Rat Terriers in terms of ownership demands, but they come with their own unique set of challenges as well. Below, we’ve listed a few things you should keep in mind when deciding whether to adopt one of these dogs.

These dogs aren’t terribly big, so they shouldn’t eat you out of house and home. A cup or two of high-quality dog food every day should do the trick.

Given their extremely high energy levels, it’s best to feed these dogs a high-protein kibble. Look for one filled with lean meat, as that will give your dog the slow-burning energy they need to stay active all day long. Avoid any sort of animal by-products, as these are made with meat that should have been thrown away.

Watch out for ingredients like corn, wheat, and soy, as these are filled with empty calories. Small dogs like Teddy Roosevelt Terriers can be especially susceptible to obesity, so it’s important to make every calorie count.

You can give these dogs a few treats, especially while training, but be careful not to go overboard. They often value praise just as much as a cookie, anyway.

If you live in a rural area, you should be careful that your Teddy Roosevelt Terrier doesn’t supplement their diet with animals they’ve caught. While it can be difficult to stop them from capturing prey, it’s important to do so, as many wild animals carry a variety of diseases.

Exercise isn’t a question with these dogs — they’re going to get plenty of it. The question is whether it will be directed by you or something they provide themselves.

An hour of vigorous activity per day is the absolute minimum. These pooches were intended to put in a full day’s work on the farm, so there’s little chance that you’ll push them beyond their capabilities.

If you don’t give them all the activity they need, they’ll burn their energy off any way they can. This usually involves digging holes in your yard or tearing up your most valuable possessions, so it’s important to make sure your dog is tuckered out every day.

Their muscular, compact bodies make them natural athletes, and they excel in agility training and other canine sports. These dogs can jump and catch Frisbees, swim all day, or accompany you on a long jog. They won’t complain and they won’t quit before you do.

It’s important to train your Teddy Roosevelt Terrier early and often, and proper socialization is also a must. If not well-trained, these dogs can become menaces, destroying tons of property and chasing anything that moves.

Luckily, they’re fairly easy to train and they tend to enjoy it. Anything that challenges them both physically and mentally is often welcomed by these dogs, so they’ll take all the obedience work you can give them.

One of the most important commands you can teach them is “leave it.” This comes in especially handy if they see a squirrel or other animal that needs chasing, as they will pursue it to the ends of the Earth if left to their own devices.

They respond best to positive reinforcement, as punishment often causes them to dig in their heels. You’ll save both of you time and frustration by encouraging positive behavior and ignoring the negative.

If you’re not confident in your training abilities, then by all means, hire a professional trainer. These dogs also do well in group classes, but only if they’ve been socialized to be tolerant of other pups.

Their short, bristly coats require little maintenance, so owning one of these dogs isn’t much of a hassle in that regard. At most, you’ll need to brush them every week or so. A soft brush should be sufficient for knocking off the top layer of fur.

Their teeth should be brushed and their nails trimmed regularly, although the latter may not be necessary, as they often file them down in the course of their regular day. You’ll need to clean out their ears with a moist cotton ball once a week or so to prevent infections.

These dogs aren’t prone to odors necessarily, but their curious nature often causes them to find messy situations — which they then roll around in. As a result, you may need to bathe them more often than other dogs, but only if necessary.

Teddy Roosevelt Terriers are generally healthy dogs, especially if you keep their weight under control. There are a few things to be aware of, though, such as:

Both genders are fairly indistinguishable in terms of appearance, although males may be an inch or two taller and a couple of pounds heavier.

While both sexes mature slowly compared to other breeds, females generally come into their own faster than males. This makes them easier to train, especially when they’re young.

Males will be more likely to cling to your side wherever you go. The ladies also like to be around you, but they’ll often be doing their own thing in your general vicinity, whereas the boys need to be involved in whatever you’re doing.

The Teddy Roosevelt Terrier is as spirited and determined as the President they were named after, and these high-energy dogs are sure to liven up your life. Owning one isn’t for everybody, though, as their extreme exercise needs and strong prey drive can make them a handful for inexperienced owners.

If you’re up to the task, though, you’ll be hard-pressed to find a more loyal or fun-loving dog. They’ll put a smile on your face every day — at least until you see what they did to your backyard.