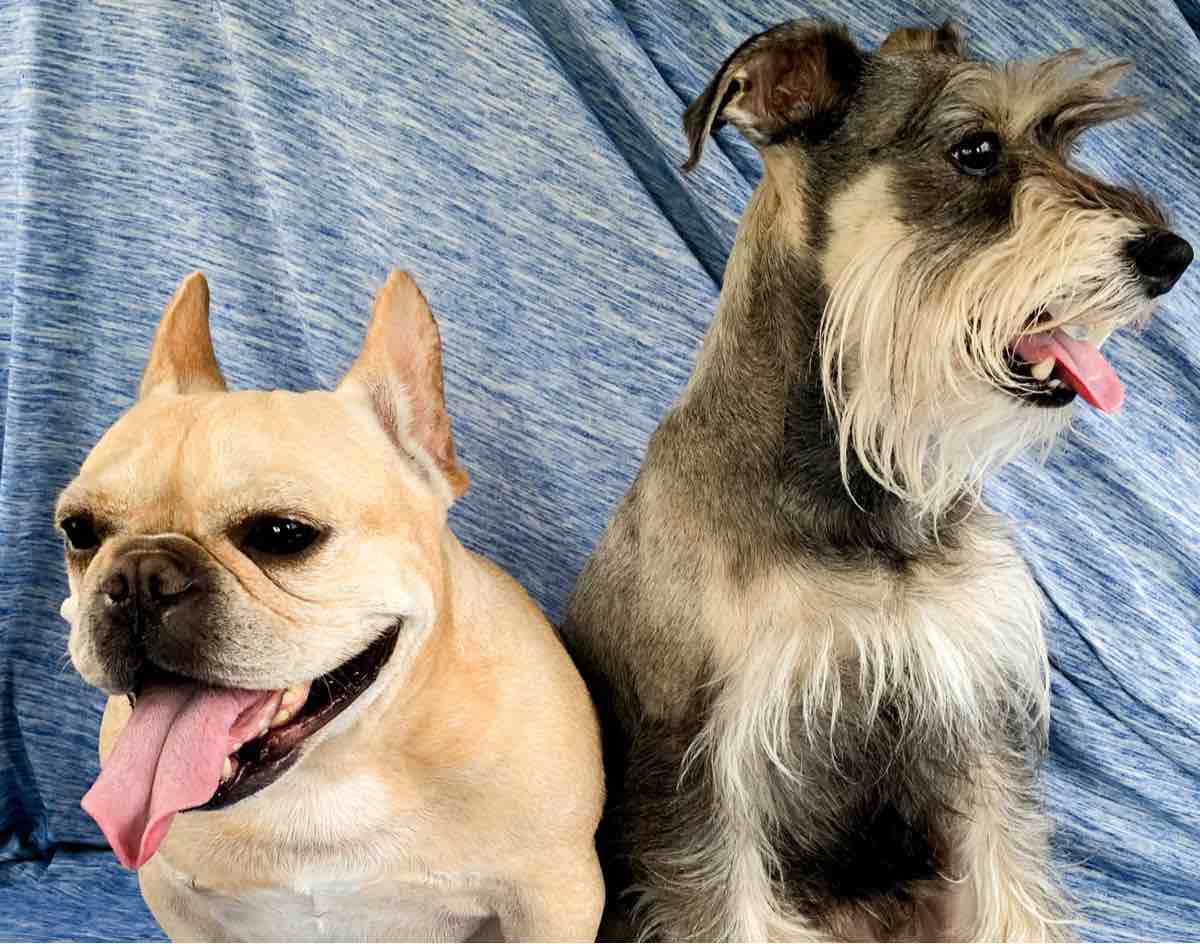 There’s a dog breed out there for everyone. Some people need a good watchdog or protector, while others just want a pup to lounge about with them. But what if you’re looking for a goofy furball ready to make you smile at a moment’s notice?

If that’s the case, you might find your forever friend with a Miniature French Schnauzer. These little guys surely are something special. Crossbred between a French Bulldog and Miniature Schnauzer, this little rascal is a loving family dog ready to join any party and liven up the situation.

But they’re not just for families either. This breed makes an excellent companion dog bent on making their owners smile. They’re also exceptionally low-maintenance and are suitable for elderly people who may be unable to put in the extra effort that other breeds require.

And if you’re looking for a lap dog, don’t cross the Miniature French Schnauzer off your list. There’s really nothing more that they love after a long day of play than snuggling up with you on the couch.

Miniature French Schnauzer Puppies – Before You Get One…

Based on what we said above, you may be considering a Miniature French Schnauzer already, and we don’t blame you at all. But there are a few things you need to consider before you adopt.

First, you need to understand that this breed is a big, mighty dog — on the inside. Despite their size, they have exceptionally big personalities. This is actually a pretty common trait when it comes to small dogs, and the Miniature French Schnauzer is no exception. If you’re used to big, gentle giants, the Miniature French Schnauzer’s electric personality may throw you for a loop.

And although they’re known for being goofy and jovial like their French Bulldog parentage, they may still carry over some eccentric personality traits from their Miniature Schnauzer side. This means they may have a nervous energy to them or be shy with strangers at first. However, this can be avoided by early socialization and play with other people and dogs while they’re still puppies.

Also, if you keep rodents such as hamsters or gerbils, you may want to reconsider getting a Miniature French Schnauzer. Their Schnauzer ancestors were originally bred in Germany to be lethally effective rodent-killing machines. And that prey drive holds today. And while they might not be able to take down the family cat, any other small creatures are at definite risk.

2. They have an exceptional sense of hearing.

Some pups have excellent vision, such as the sighthounds, while some have noses that can detect objects miles away, like Bloodhounds. The French Miniature Schnauzer, for its part, possesses an incredible sense of hearing. This is derived from their Schnauzer side, whose ears were originally trained to detect even the tiniest of mouse squeaks that often register at frequencies twice above the capacity of the human ear.

Because of their high prey drive towards rodents, it should come as no surprise that this breed is one that just loves to dig. And that’s because they’re instinctually looking for little burrows and hidey-holes where rats and mice may call home. So, if you let them play in your yard or keep them outside for extended periods of time, don’t expect a hole-free yard. It’s just part of the Schnauzer lifestyle.

Related read: 15 Simple Ways to Keep Your Dog From Digging Under a Fence

This breed has a well-established reputation for being the class clown. They’re usually the life of any party and have no problem being the center of attention. French Miniature Schnauzers are also quite clever and come up with neat little schemes just to win your heart. Much of this behavior comes from their French Bulldog side and is usually the dominant personality inherited.

However, they may still exhibit some of the anxiousness and territorial nature of the Schnauzer. Thankfully, these undesirable traits are easily avoided through early training and socialization.

The French Miniature Schnauzer makes for an excellent family pet, especially for those with children. They love having playmates around and being able to get attention whenever they crave it. But make no mistake, this breed is also perfectly content being a companion lap dog. They’ll thrive in just about any environment you put them in.

On the other hand, they don’t fare well with other small creatures. This can include cats, rodents, birds, or lizards. They have such a high prey drive, particularly for smaller animals. Larger cats may not be too much of a problem, but putting the two together may cause a standoffish living condition.

A post shared by Bowie the Diamond Dog (@bowie_the_diamond_puppy_dog)

Things to Know When Owning a French Miniature Schnauzer:

If you’re ready to take on the giant personality that is the French Miniature Schnauzer, there are a few things that you’ll need to know in order to raise a happy, healthy pup.

Since the French Miniature Schnauzer isn’t a large — or even medium-sized breed — you’re not going to need to feed them too much. As a matter of fact, food will be one of the cheapest parts of owning this dog. But it’s also one of the most important factors to consider.

You want to make sure that your pup gets all the nutrition they need in order to properly function throughout the day. And that is why we recommend a high-protein food such as Blue Buffalo Life Protection Small Bites. This ensures that they get the right nutrition in a little bite-sized morsel that they can easily accommodate.

You’re not going to want to feed them more than one cup of food a day. You can space this out into two half-cup feedings if you’d like. However, some owners choose to put their food in their bowl all at once. Unlike some garbage truck breeds — such as Labrador Retrievers — French Miniature Schnauzers tend to have some self-control when eating and will stop when they’ve had their fill.

These little guys aren’t necessarily the most active dogs around, but they do require daily activity. About 45 minutes a day should satisfy their need for exercise. And apartment dwellers or elderly individuals don’t need to worry about going out to walk them multiple times every day. It’s not uncommon for them to wear themselves out with one good case of the zoomies.

Obedience training is a necessity for French Miniature Schnauzers in order to really bring out their jovial, playful nature. However, you may find that your pup doesn’t take to training quite as easily as others. That’s because they can be pretty stubborn creatures. It’s a Schnauzer trait they’ve inherited. But once they’ve been initially trained, they’re capable of following advanced training, such as those for agility sports.

Grooming considerations really depend on which coat your French Miniature Schnauzer inherits. If they have a single coat from the French Bulldog, grooming is a much easier process. They’ll need a weekly brushing to ensure they keep a nice coat.

However, if they inherit the Schnauzer’s double wiry coat, grooming is much more high maintenance. Daily brushing may be required along with more frequent clipping and trimming.

The French Miniature Schnauzer is a fun little pup, but they do come with their own set of health issues. Through different generations of designer breeding, they’ve acquired a bunch of different potential health concerns. The most serious issues can be fatal such as pulmonic stenosis.

The French Miniature Schnauzer is a fairly petite pup, but the males will tend to stand slightly taller than the females and weigh slightly more. Generally speaking, the personality traits of your particular dog will be based much more on which parent their take after, as opposed to which sex they are.

The French Miniature Schnauzer is a wonderful little family dog that’ll do everything they can to steal your heart. But they’ll require a little bit of effort and training in the beginning to overcome some less desirable traits.

However, once properly trained, you’ll find the French Miniature Schnauzer to be a great goofy addition to your home.

Maltese vs. Maltipoo: What’s the Difference?