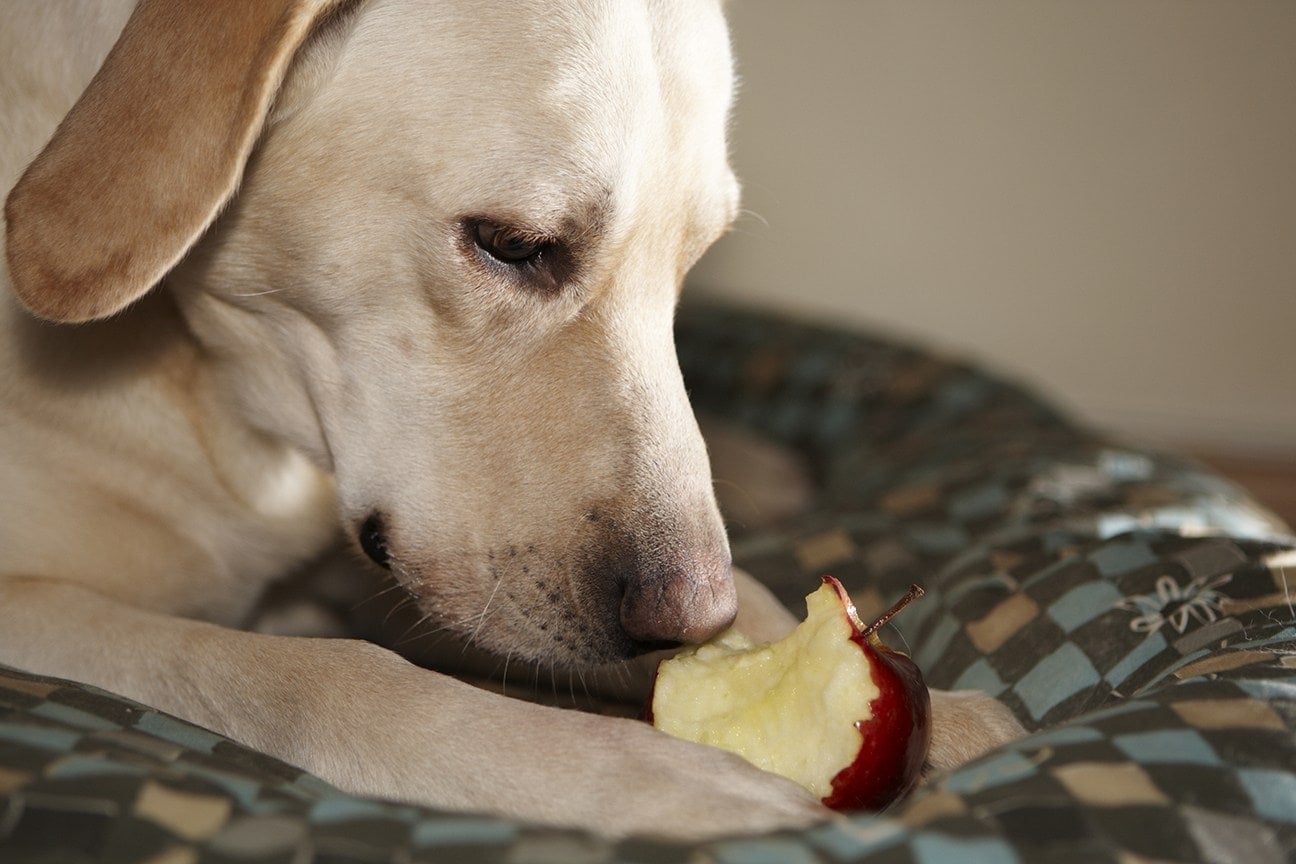 Dogs eating odd things is not an uncommon event around the household. For many dogs, their mouth and their nose are their universe, and they are driven by curiosity to put things in their mouth. They will pull things out of the trash, eat interesting things on a walk and find all kinds of things on a kitchen counter if given an opportunity.

Many people have heard that apple cores are toxic because of the seeds. This is true, albeit, on a very large scale of consumption. Your dog would have to eat a lot of apple seeds to put their overall health at risk. So, don’t worry! If your dog ate an apple core, odds are she will likely pass it without incident.

Apple seeds contain a compound called amygdalin which, when chewed or digested is converted to hydrogen cyanide. While cyanide is toxic in general, it is not considered a problem at the level of the tiny amount in apple seeds.

Every plant-based fruit contains some naturally occurring ingredient that a dog’s liver will metabolize readily. According to ASPCA Poison Control, a medium size dog would have to not only ingest but literally chew up 85 grams of apple seeds in order to ingest a toxic amount. That equates to the amount (and ground up seeds) of 200 apples. That’s a lot of fruit and belly ache of enormous proportion! As it is with most edible material that is ingested, their liver will break it down and metabolize it without incident.

So, can dogs eat apple cores? You can feed a sensible amount of apple cores with the seeds to your dog and cyanide levels won’t be considered to be anywhere near a level to be concerned about.

Apples are actually a delicious treat and many dogs like to eat apples. If you do feed your dog apples, chop it up so that the segments are bite sized pieces. Be careful that your dog does not choke on the core if you do feed her apples, hence chopping it into bite size portions is ideal to avoid her inhaling the whole thing accidentally. Never allow her to eat a whole apple as this may lead to choking or getting it lodged in her esophagus. This can be a problem for dogs who don’t actually chew their food, but swallow it instead.

Apples are a good source of what is called insoluble fiber and a small percentage of dogs may eat an apple or the core and develop GI upset as a result, most commonly diarrhea or softer stools than usual. This is typically self-limiting and will resolve on its own. You can continue to feed chopped apples incrementally over time, allowing the bacteria in her gastrointestinal tract to adjust.

The next time your dog rummages around for something good to eat, don’t sweat the apple core. She simply has an excellent palate and doesn’t like to waste food!

My Dog Ate a Sock! Here’s What to Do (Vet Answer)

My Dog Ate Onions! Here’s What to Do (Vet Answer)