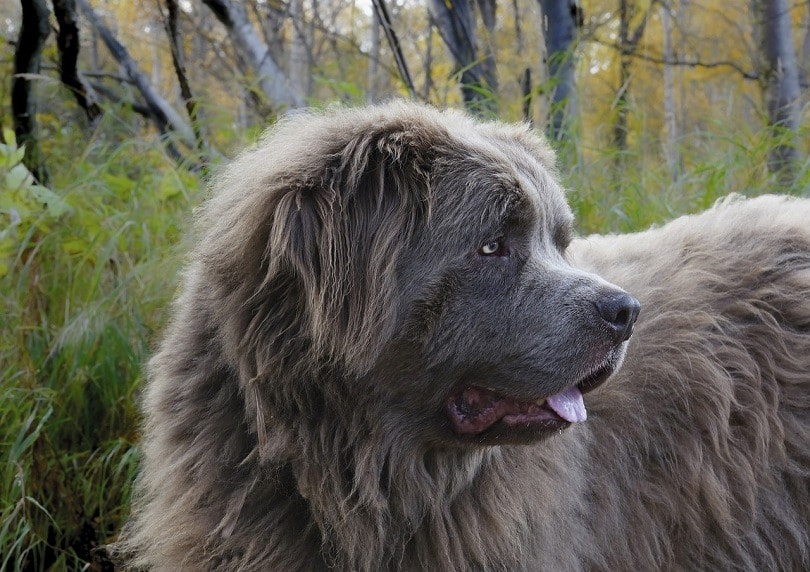 Everyone that’s ever met the crossbreed designer progeny of the Poodle and Newfoundland seems to be able to agree that they’re a marvelously friendly dog that is quite intelligent and generally good-natured. What they can’t seem to agree on is a name for this breed! Most commonly called a Newfypoo, other potential names have included:

For the sake of preventing confusion, we’ll be referring to this gorgeous dog breed as the Newfypoo throughout this guide. In it, you’ll learn everything you ever wanted to know about this easily trainable, water-loving breed — as well as the next steps to take if you’re considering adding one to your home.

Newfypoo Puppies – Before You Get One…

Making the decision to bring a new dog into your life is filled with questions: What sort of personality will your new puppy have? Is this breed good with kids? How much exercise will they need?

To understand the answers to these questions and more, it’s useful to look at where a dog’s breed comes from. In the case of the Newfypoo, this means taking a closer look at both of its parent breeds: the Poodle, and the Newfoundland. Let’s examine each in more detail.

Poodles are widely regarded as one of the most intelligent dog breeds around and are known to take readily to training and canine sports. They’ve taken top honors in many dog shows, including the prestigious Westminster Kennel Club Dog Show and World Dog Show — where they’ve won “Best in Show” a combined five times. Energetic, friendly, and sociable, they thrive when provided with constant mental and physical stimulation.

The Newfoundland, on the other hand, is a large working dog breed originally intended for helping fishermen in eastern Canada. Massively oversized, exceptionally intelligent, and tremendously strong, they’re a calm dog breed that becomes intensely loyal to their owners. Often known as the “gentle giant” of the dog world, the Newfoundland’s kind-hearted nature has made them a popular choice for families and single owners alike.

Combining the opposing characteristics of these two breeds seems to have served the Newfypoo well, for they are both decidedly calm and caring as well as pleasantly sociable and easily trained. Given plenty of room to run and play as well as large daily feedings, they’ll happily live for up to 12 years — quite an old age for a dog breed of this size.

1. They Are Excellent Swimmers

With the rugged muscular build of a Newfoundland and the athletic agility of a Poodle, Newfypoos are graceful swimmers that love to play in the water any chance they get. If you live near a body of water, you can even train your Newfypoo to perform tricks or agility routines while swimming.

Combining the alertness and energy of the Poodle with the sturdy frame and abundant muscle of the Newfoundland, Newfypoos are almost perfectly suited as watchdogs. They are known for being vigilant and protective of their families and can be trained to bark to alert you of strangers.

3. The Dog from Peter Pan is Based On A Newfoundland

Author J.M. Barrie was accompanied by a Newfoundland named Luath for the entire time he was writing Peter Pan. Acting as the inspiration for “Nana”, the nursemaid dog, Luath exemplified the Newfoundland’s kind and gentle nature to an extreme and was known to love taking care of children.

Temperament & Intelligence of the Newfypoo🧠

The results of crossbreeding purebred dogs can often be unpredictable. Whether or not their offspring enjoy the many positive qualities of their parents or end up displaying their worst neuroticisms is mainly up to chance. Thankfully, the Newfypoo has hit the genetic lottery with its parentage — and shows many desirable characteristics of both parent breeds.

Chief amongst these wonderful traits are the Poodle’s piercing intelligence, and the Newfoundland’s kind and gentle soul. Newfypoos are clever yet caring, alert yet calm and confident. For anyone who loves large dogs and wants a constant companion, they’re an excellent breed to bring into your home.

You need look no further than the Newfoundland’s affinity for taking care of children to know that yes, Newfypoos are excellent for families. They’re at their happiest when surrounded by activity and stimulation and are remarkably careful around small children — earning them their reputation as a “nanny dog” for young kids.

Any hunting dog instincts that may have been in the Newfypoo’s gene pool has long since found its way out, making them affable and sociable with all kinds of pets. They love running and playing with other dogs, but will not so much as bark at cats, rabbits, or birds. Once bonded to another dog, they will go out of their way to protect them from any dangers.

Things to Know When Owning a Newfypoo

Is the Newfypoo sounding like the perfect dog to add to your family? Before you commit to buying or adopting one, be sure to consider the following topics that relate to their health and well-being.

Newfypoos are very large dogs and require an equally large amount of food. With most Newfypoos eating up to 6 cups of food per day (spread out between three meals), you should be prepared for a significant monthly food cost. Plan to budget for anywhere between $80 and $100 per month for their dry food, depending on which food your vet recommends given their stage of life.

Active but not hyperactive, the Newfypoo has excellent endurance and strength that it enjoys exercising whenever possible. A born water dog, they take easily to swimming — which is also a perfect exercise to keep pressure off their sometimes-sensitive joints. Ideally, you should be able to provide around an hour of moderate to vigorous physical activity for your Newfypoo each day.

Smart and eager to please, the Newfypoo is one of the most readily trainable large dog breeds due in large to its Poodle ancestry. They pick up new tricks quickly and love learning new commands.

Perhaps the most important thing to train a Newfypoo puppy to do is how to walk properly on a leash. As they grow into their full adult size, any time that you’ve put into training them not to pull on their leash will pay off in spades.

The curly and dense medium-length coat of a Newfypoo tends to attract dirt and grime more than many other dog breeds and will require more frequent brushing and spot cleaning to keep it looking fresh and clean. Daily brushing and combing will keep your Newfypoo happy and healthy all year round.

While generally healthy thanks to their crossbreeding, in rare cases Newfypoos may exhibit any of the following conditions:

Both male and female Newfypoos exhibit the same tendencies towards caretaking as their Newfoundland ancestors, as well as the intelligence of their Poodle parents. Generally, male Newfypoos will grow to a larger maximum weight, though female Newfypoos are more prone to obesity when overfed.

A gentle giant with a heart of gold and clever wits to match, the Newfypoo is a perfect dog to add to families large and small. Thanks to their crossbreeding, they enjoy a longer lifespan than many other large dog breeds — meaning that you’ll have plenty of years to spend playing with them, teaching them new tricks and relaxing around the house.