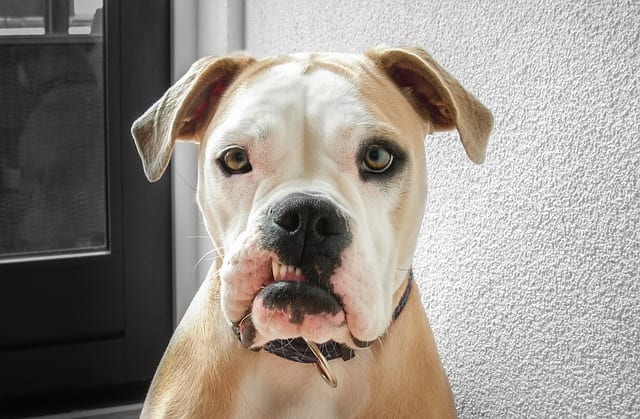 The Olde Double Bully Dog is a mix between a modern Bulldog and the throwback Olde English Bulldog. They’re a “double” bulldog because of this, hence their name. They may look fierce and protective, but they were bred solely to be companion dogs. They do not have an aggressive bone in their body.

These dogs are quite energetic as puppies, but they quickly calm down as they age. As adults, they tend to lounge around more often than not. They are renowned for doing well with children and showing plenty of tolerance. Many people say that this mixed breed is outgoing, but they can be unsure of strangers. They are not as friendly as a Labrador Retriever, for example.

Overall, these dogs are a stable and reliable companion. They enjoy spending time lounging around the house and are not particularly active, making them suitable for families that don’t want to spend much time exercising their canine. They are not incredibly healthy, however. They are prone to a wide variety of different health problems. You should consider this carefully before purchasing one. You can expect these dogs to need quite a bit of healthcare in their lifetime.

Olde Double Bully Puppies – Before You Get One…

Olde Double Pully puppies are quite rare. They are not technically a breed, so it is difficult to find a breeder that breeds them. Because this is a mixed breed, they are not recognized by the American Kennel Club. However, you may be able to find them at our local shelter. Some dog breeders breed this breed on the side, but this is most common in urban areas.

These dogs were bred to be companions, so that is their only purpose. They don’t have particularly strong prey or protection instincts, though they can be a bit unsure of strangers. They need early socialization to ensure that they are accepting of strangers. However, they are generally perfectly fine with others as long as they are introduced to others regularly.

1. This breed is a mix of many different breeds.

Mostly, this breed is a mix between the two modern different bulldog breeds. However, they share traits and genes with a variety of different breeds, including Mastiff.

2. These dogs are mostly designed to be companions.

Because this is a mixed breed, you never exactly know how these dogs are going to act. However, both parent breeds act pretty similarly, so it is usually easy to determine how puppies may act once they mature. These dogs are usually just used for companionship, not hunting or guarding. For this reason, they are typically very friendly and affectionate – two traits any companion dog should have.

They are often quiet and well-behaved indoors, especially if they are trained and socialized from an early age. They are not the most intelligent dogs, as they weren’t bred to do any incredibly tricky task. However, they are decently easy to train, since they typically love pleasing their people. They also love food, as you can expect from most dogs, so they will usually listen to whatever you’re saying if you have treats on-hand.

With that said, these dogs can be a bit stubborn. In days past, they were bred to fight bulls and other large animals by themselves. Because of that, they are not particularly good at listening to commands – it just isn’t something they were bred to do.

Yes. These dogs were bred to be family dogs. They are patient with children and adults alike. They are playful but pretty behaved indoors. Furthermore, they are not incredibly energetic, making them a good fit for families who don’t want to go on many walks. If you would rather have a dog to watch TV with you all day, this is a good dog breed to consider.

This breed isn’t incredibly small, so they are typically good with smaller children. They won’t be hurt easily and are quite hardy. You don’t have to worry about smaller children falling on them or anything of that sort. This also diminishes the chances of the dog snapping at the child as well, since dogs tend to snap when they are scared or injured.

On top of this, they also don’t have significant prey-drive instincts. They will not usually chase other animals if socialized earlier. They are usually quite docile around other animals, including livestock and similar animals. As long as they are introduced to various pets when they are younger, they usually do not act aggressively towards them later on.

Things to Know When Owning an Olde Double Bully Dog

These dogs do not have any particular dietary needs. However, they are somewhat prone to obesity, which may mean that they need a weight management food. This might exceptionally be an issue when they get older.

Of course, you can also work on exercising your dog more instead. However, depending on how short your particular dog’s muzzle is, this might not always be safe in all climates. These dogs do not take particularly well to exercise because of their various health problems. Because of this, many owners decide to control their dog’s food intake instead.

These dogs cannot be exercised vigorously, or it can be dangerous. They are not made for extensive physical activity and are prone to overheating. They cannot always pant efficiently, which limits their ability to cool themselves down.

These dogs love to please their people. In some cases, this makes them excited to train and listen to your commands. However, they were not bred to listen to commands and can be very independent. They do get a stubborn streak, usually around sexual maturity. However, food and lots of love can overcome this decently easily.

They aren’t the smartest dogs, so they cannot learn complicated commands. They may take a while to figure stuff out, so be sure to give them time while training them.

The Olde Double Bully dog is not particularly high-maintenance when it comes to grooming. They have short hair, and therefore do not need trimmed or brushed very much. They do shed, and an occasional brushing can prevent some of the loose hair that ends up around your house.

Furthermore, these dogs will need their nails trimmed, and teeth brushed just like every other dog. Their face will need to be cleaned as well due to all of their wrinkles. Inflammation and sores can develop in their creases, so it is essential to clean this area regularly. Their ears may need to be cleaned regularly, as dirt and debris can build up and cause infections.

These dogs are quite unhealthy. Both parent breeds are prone to similar health problems, so this mixed breed tends to be prone to these same health problems. If you decide to adopt this puppy, you should plan on spending a bit on vet visits.

This mixed breed is a family dog, first and foremost. They were bred to be companions, so they are perfect for families who want a dog to lounge around with them all day. They are not high-maintenance in the least, but they are prone to a variety of health problems. Overall, this is a great dog breed if you’re interested in a companion dog and don’t mind paying significant amounts of money in vet bills.