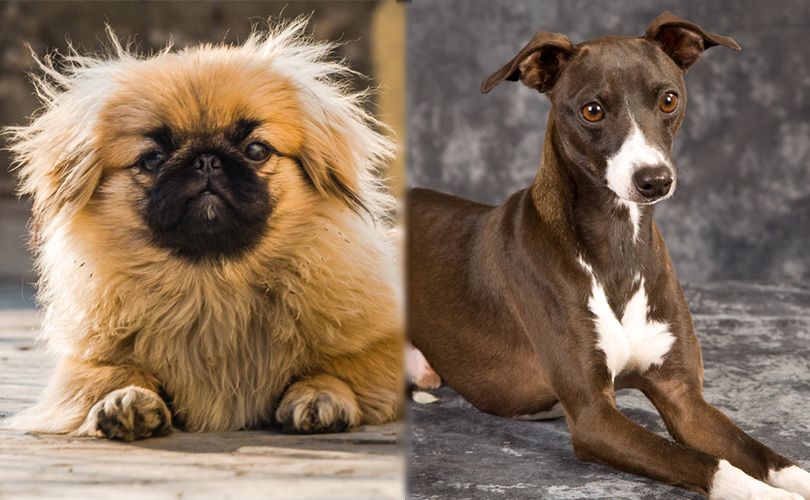 Peke Italian dog is a small, hybrid breed that has only recently been developed. They were bred at the beginning of the trend for designer dogs in the early 1900s. These are more established than some other designer hybrids but are still not widely popular or recognized by the AKC.

The Peke Italian is a cross between the Pekingese and the Italian Greyhound. These little pups are loyal through and through. They have a deep well of love for the members of their family. They make excellent companions for seniors or people who don’t have much time to exercise with them.

This breed does not yet have standards assigned to them. Thus, they can inherit a wide range of traits and appear different from one another.

Peke Italian Puppies – Before You Get One

3 Little-Known Facts About the Peke Italian

1. Pekingese is one of the ancient Chinese breeds.

The Pekingese originates from ancient China. Although researchers are not entirely sure when they developed, we know that they have been around for at least 2,000 years.

They were not like the Pug, which was a treasured pet and companion for nobility and royalty at the Imperial Palace. Instead, for many years, their only purpose was to carry around the robes of those holding positions in the Chinese Imperial Court. Since this gave them a certain amount of recognition, no one was allowed to own these dogs except for royalty.

Since this breed was not as treasured, they did not receive as much attention and didn’t get a complete breeding record. This lack of information has challenged researchers today because there are many centuries in which their history is blank.

However, we catch back up with them in the mid-1800s during the time of the Opium Wars. The Dowager Empress Cixi had begun to gift these little dogs to foreign officials.

The most effective means of transportation across the globe was the British army that marched on Peking during the war. They took these pups as part of the spoils of war and brought them to Europe and North America.

They were subsequently recognized by the AKC in 1909, becoming one of the earlier breeds to gain this recognition.

2. Italian Greyhounds have a love for racing around, whereas Pekingese prefer to sit and be admired.

The Italian Greyhound is another pup that has a long-reaching lineage. We have recorded history from them starting about 2,000 years ago, this time in the Mediterranean. Here, they lived happily in a warm environment as house pets for many centuries.

In the 16th century, Western Europeans began to set up more trade between countries and continents. These dogs began to spread both westward and eastward. They were the most popular in the United Kingdom and remain well-loved to this day.

During World War I, many dog breeds faced imminent extinction. The Italian Greyhound was one of these. However, in America, they had become a sporting breed, seemingly born to race. Therefore, breeders in the United States set about resurrecting and maintaining the breed.

Italian Greyhounds gained recognition from the AKC in the late 1880s. They are no longer used for racing but love to run freely to exude some of their energy. In contrast, Pekingese have a brachycephalic head, meaning they are not capable of strenuous activity and would prefer to laze around and be admired.

3. Peke Italians appreciate a well-maintained routine more than most breeds.

Peke Italian pups need a well-maintained routine to remain content. They do best and train much more quickly when they have an established pattern to stick with each day.

To develop this kind of routine, set times for each of their primary daily activities. Set them up with specific times for meals and exercise. This desire for a structure makes them an excellent breed for seniors or other people who also follow a consistent daily routine.

Temperament & Intelligence of the Peke Italian 🧠

Beyond preferring a routine in their life, Peke Italians are not so consistent. There has not been a standard developed for the breed, so they can inherit a variety of both physical and emotional traits.

These dogs tend to be devoted to their family members. They need to spend plenty of time with you, but they do not need to be active. If you are around to cuddle them and maybe play a few games, they will be satisfied.

These dogs have average intelligence but have larger hearts. Their sensitivity can sometimes make them difficult to train if you use anything other than positive reinforcement. They are not social when it comes to strangers, primarily due to their protective natures.

Even though they are small, they can make excellent watchdogs. They do not hesitate to bark at anything that seems out of the ordinary to them.

The Peke Italian is an excellent choice for a family companion if their home environment will be one of stability. At times, a family’s hectic routine will throw this dog into a feeling of discomfort and disarray. These conditions can manifest in ugly ways, including destructive behavior and a breakdown of training.

They do have quite a bit of patience, so small children do not bother them that much. They have enough energy to make a good playmate for kids and a cuddler for anyone.

The Peke-Italian can have protective and territorial tendencies. However, overall, they are friendly and social. If you are not going to be around often for your pup, it is recommended to get them another dog that can be their companion.

If you have other animals or want to adopt animals, introduce them to your family slowly but steadily. Once the Peke Italian identifies them as a friend, they won’t hesitate to accept them.

Things to Know When Owning a Peke Italian

The Peke-Italian is a small dog, often classed as a toy breed. They only need about 1 cup of food each day. Keeping them on a regular feeding schedule is the best way to make them happy and keep their digestive systems functioning properly.

Do not free feed these dogs. Instead, split their meals into two: one for “breakfast” in the morning and the other as an evening “dinner.” This space also helps prevent indigestion.

If your pup inherits the brachycephalic face of the Pekingese, purchase a smaller-sized kibble. The shape and size make it easier for them to pick up and eat.

The Peke Italian is often classed as a low-energy dog. They seem to inherit the lazier side of both the Pekingese and the Italian Greyhound. Giving them about 20 minutes of consistent activity each day should be enough to keep them healthy.

If you enjoy taking your pup out for walks during the day, try to hit around 4 miles each week. With a brachycephalic face, it is not good to engage them in strenuous activity, as they struggle to keep breathing. If they have more of an elongated snout, feel free to push them a bit harder.

Training these little dogs tends to be quite easy. Their world revolves around you, so they want to make you happy. So long as they have a routine to stick to in their training sessions, they will have no problem.

Be sure to reward them with plenty of positive reinforcement. These are highly sensitive dogs, meaning they do not handle any sort of negative feedback well.

The grooming required for a Peke Italian varies depending on what type of coat they inherit from their parents. They can have medium-length and thick coats. These shed a moderate amount and need to be brushed at least once a week.

The dogs can also have the coat of an Italian Greyhound. It will be close-cut and thinner. This type sheds as well. Brush them a couple of times a week to slow the spread of the hair. Neither parent is hypoallergenic, so the Peke Italian isn’t either.

Beyond looking after their coat, keep tabs on the other important aspects of grooming. Make sure their nails are clipped and that their teeth are cleaned daily. Their ears are typically erect. You should clean out any collected wax and debris with a soft, wet cloth.

Peke Italians have a wide range of genetic disorders that they can inherit. It is essential to know the vet records of the parents to be prepared. Maintain their annual vet visits to catch any health problems early.

There are no recognizable differences between males and females in this breed.

In summary, the Peke Italian is a breed that needs plenty of love, but they need it coupled with stability within their home environment. They can make excellent pets for families and be socialized to become the happy, friendly dogs that they tend to be.

If you do not have the time or energy to take a dog out for long jaunts, then the low energy of this breed will suit you well. They are also highly adaptable to a variety of living situations. Their size makes them wonderful pets to have in an apartment setting.