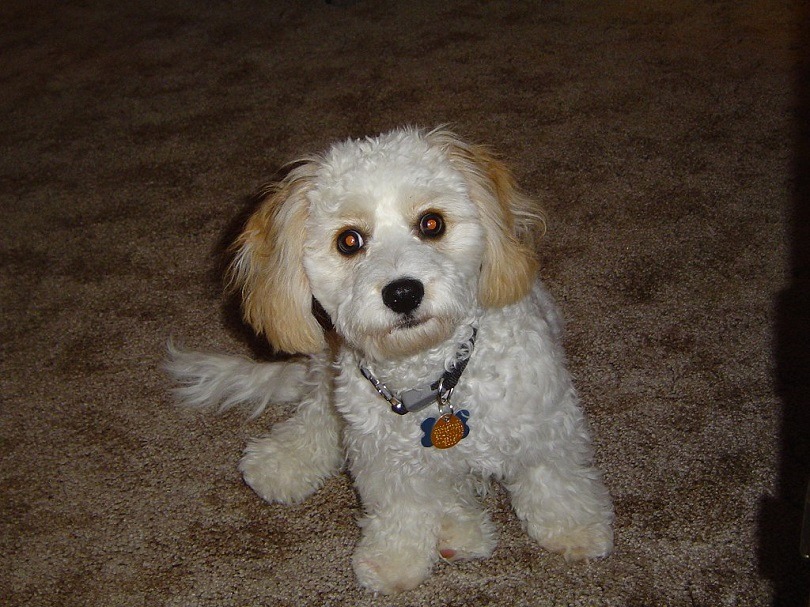 If you are looking for a new dog and researching different possibilities, consider a Cavachon. The AKC does not accept this dog since it is a hybrid pup, mixed between the adorable Bichon Frise and the regal Cavalier King Charles. The breeding tends to combine the best of the traits associated with these breeds, making it an adorably affectionate and gentle dog.

The risk to become aware of when investing in a mixed breed dog like the Cavachon is which parentage line the temperament will favor. The combination of the two parents makes for a surprise in each Cavachon puppy. This breeding doesn’t mean that you are risking getting a poorly behaved dog, though, since both of the parent dogs have thoroughly lovely temperaments.

Cavachon Puppies – Before You Welcome One Into Your Family…

1.  The parents of the Cavachon were both prized as nobility.

The Cavachon puppies were thought to have been initially bred in the USA around 1996. However, both of the parental lines were accepted as royalty during their history. The Bichon Frise was initially bred in the Mediterranean, where Italian sailors found them and brought them back to Italy. There, they became prized by Italian nobility and became Italy’s dog of the noble courts.

The Cavalier King Charles is better known for its noble breeding. The royals of Britain treasured this Toy Spaniel due to its gentle and loving nature. It is depicted in paintings with nobility and royalty as early as the 1600s

2.  The coat of a Cavachon may only be partially hypoallergenic.

3.  The AKC does not recognize the Cavachon.

Temperament & Intelligence of the Cavachon 🧠

Just like any other mixed-breed dog, the temperament of the Cavachon is highly dependent on its breeding. No two dogs are the same in any case, but with hybrid dogs, there are even more combinations of traits that can be found in a puppy than with purebred dogs.

The kennel, Gleneden that claims the first developments in the Cavachon breed characterize them as generally very loving, friendly, and gentle dogs with a playful streak. These characteristics are what make them such good dogs for providing companionship as well as becoming an addition to the family.

One of the most critical aspects of the raising of your Cavachon puppy is an early introduction to other people, kids, dogs, and other animals. They can be very agreeable, but without the proper assimilation into family life, they can end up being shy or developing Small Dog Syndrome. When this happens, they become more intolerable of others in their space, whether dog or person.

Cavachon dogs do not do well by being left alone for long periods. They like to be around people and often form a special bond with one person in particular. With the combination of early socialization and good breeding, this dog is loving and gentle to all it encounters.

These dogs are excellent fits for families, even with small children, as long as they are socialized from a young age. They are playful, small in size, and have similar energy levels to small children, making them lovely playmates.

Just as with small kids or strangers, this dog does well with other pets if it is socialized early on. If it is not socialized from an early age, all is lost when integrating this dog into a home with other pets. However, it will take more time and training than it would have. They are a pretty trainable breed, but it may take a while to train out barking at strangers or unknown animals.

Things to Know When Owning a Cavachon:

Cavachon dogs have very high metabolisms. Their high rate of digestion and calorie use means that even though they are considered a small breed dog, they need a calorie-dense diet that is much higher than other similarly sized dog breeds. Compared to large dogs, they eat less in a day but need more calories per pound of body weight.

To give an example, if a typical large dog needs twenty to thirty calories per pound of body weight, a Cavachon will need thirty to forty calories per pound of their body weight. Luckily, since Cavachon dogs are so small, this doesn’t mean buying dog food every week. Find high-quality food that is calorie-dense to satisfy your pup’s needs. The amount they get changes slightly based on factors such as their weight, their overall activity level, and their age.

A Cavachon, especially a younger dog, is quite energetic and playful. They are more convenient to exercise than larger dogs might be due to their small size. Their stature makes it easy to play with them in an enclosed yard or even inside an apartment.

Their energy levels are part of what makes them great pets for children since they help tire each other out. If there is not a lot of space to play or they need more energy output, at least half an hour walk a day should suffice to keep them in shape for a longer, healthy life.

Small dog breeds are typically more difficult to house train and will need extra reinforcement to make this process faster. Cavachons are quite intelligent and are eager to please their owners, making them a little easier to train than other more stubborn dog breeds.

When training, be sure to keep the sessions with your Cavachon short, direct, and with consistent and firm direction. This helps the little dog not become overstimulated and confused at what it is expected to do. Keeping the sessions short also helps to retain their attention instead of letting them become bored.

These dogs are softies at heart and do not react well to negative feedback. Positive interactions and rewards for good behavior go a lot farther when forming a bond as the trainer with the pup. Consider enrolling them in puppy classes since socialization early on is one of the most important parts of their overall training to be a well-behaved adult dog.

Cavachons do not shed a great deal and are also generally regarded as hypoallergenic. Their fur does seem to suck up any dirt or mess that they find themselves in, and thus they need regular grooming. This is also helpful to keep mats from forming in their medium-sized but somewhat curly hair.

When grooming, use a pin brush and a slicker brush to start gentle and then work deep into the layers of their fur. Clip their nails regularly to prevent any tears or breakages. Check inside their ears to clean out any dirt or plant material, wiping it out with a damp cloth.

The Cavachon breed may need to have their fur trimmed, especially around the eyes or belly. If you want to give your dog a bath, be sure to use a veterinarian-approved shampoo to protect their skin from irritants.

When it comes to mixed breed puppies, if both parent breeds commonly suffer from the same condition, the puppy has a higher chance of being afflicted with that condition. Many people believe that mixed breeds are generally healthier than purebred dogs because they have a larger gene pool. For the most part, this holds for Cavachon puppies as they are usually a healthy dog breed.

One of the conditions that the Cavachon suffers from is ear infections due to its long, floppy ears. This type of ear doesn’t allow for a lot of airflow into the inner ear and thus harbors moisture. Cleaning them each week helps to prevent infection.

This particular dog breed is at a higher risk than most if it gets a flea infestation. Cavachon are generally allergic to flea bites and can have adverse reactions that are quite dangerous for the health of your dog. Be sure to use a monthly flea and tick prevention to keep them safe.

Finally, one of the other things to watch out for weekly in your dog is dental issues. Small dogs often struggle with these problems more to their skull structure. One of the parents of the Cavachon, a Bichon Frise, is particularly susceptible to dental problems. Brush the dog’s teeth daily to keep the dentist away.

There are no noticeable differences between male and female Cavachons. Even in size, there are no recognizable standards to give when selecting the gender of a puppy. Both genders of Cavachon are just as likely to end up with the same mix of traits and should be socialized early on to bring out the best in them.

Cavachon pups are the way to go for many that want a cute, fluffy friend. They do great as family pets, cheerful and gentle, while still being able to liven up a place with their adorable antics.

With the mix of some of the most majestic and treasured dog breeds in history, the Cavachon is born to greatness, fit for royalty. Relatively easy to train with persistence from new dog owners, or a companion for a senior or a single, this doggo fits all of the criteria.