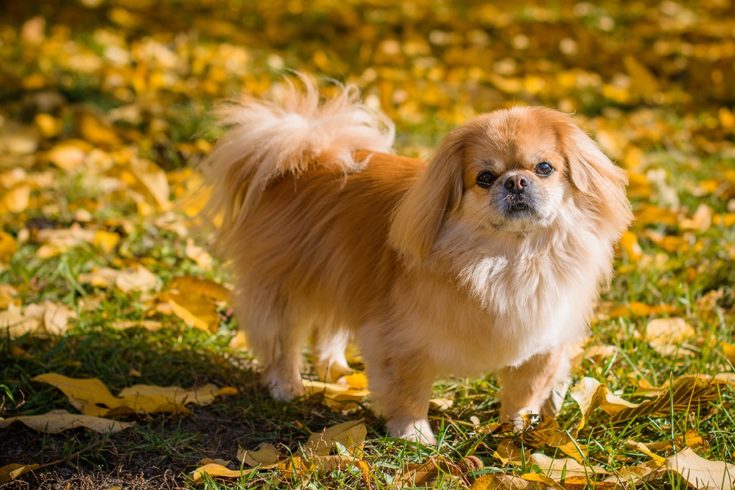 Originally, the Pekingese were bred as a companion to the Chinese imperial family. They would accompany their humans everywhere, and this is still evident in today’s Peke.

The breed is considered suitable for novice owners, as well as experienced, although they can prove difficult to train because of their stubbornness and incredible level of self-importance. This can be improved if they know there’s a treat in it for them. They adapt to life in an apartment, require minimal exercise, but they do have a tendency to yap, especially when left and when feeling intimidated or threatened. This can make them unsuitable for those with neighbors in close proximity.

As a loyal companion dog, the Pekinese will bond closely with their humans, and will usually form a very strong link with one human owner. Although a well-socialized Peke will get on with everybody they meet, they may show indifference to those outside their family unit. The Peke does not respond well to being pulled and prodded, and they may nip at small children that treat them in this way, so care should be taken around very young kids.

Pekingese Puppies – Before You Get One

1. The Pekingese Has Royal Heritage, And He Knows It

Pekingese were originally bred as companions for royalty. They would accompany members of the imperial families of China. They held positions of honor. Even when they were brought to the West, they were first introduced to Queen Victoria, who adopted them.

The Pekingese seem fully aware of their lineage, and as well as walking with their heads held high in honor of this, they also act as though they are members of royalty. They can be headstrong and stubborn, and they will happily sit aloft a velvet cushion and expect their human owners to lavish them with food, treats, and gifts. Unfortunately, this attitude means that the breed is not the easiest to train, and it can take a resolute owner to get through to them.

Although the breed is very small, they can make excellent guard dogs. They won’t be able to take intruders down on their own, but they are vocal little dogs that are wary of strangers. This means that they will bark at anybody they do not recognize as they approach.

While this can sometimes cause problems with the neighbors, it will deter a lot of trespassers, who are looking for an easy target. What’s more, what this breed lacks in size, they more than make up for in bravery, and most will fight to the death to protect their owner. In Ancient China, the breed was kept in the sleeves of royal family members and would bark to protect their owners.

3. They Require A Lot of Grooming

The breed is considered a good one for novice owners, but they are actually quite difficult to maintain thanks to their high grooming requirements. Their coat is long and needs to be brushed several times a week to prevent it from becoming matted and knotted. They will also require the occasional bath because dirt and grime show up easily on their coat. Many owners also choose to trim the hair above their eyes so that they can see comfortably and also keep themselves cool.

The Pekingese can live comfortably in cold climates but does not fare well in hot climates, hence the need to trim their fringe and potentially even provide a source of cool air during the summer months. They also shed, and while regular brushing will help remove a lot of the dead hair before it settles on furniture and the floor, there will inevitably be some run off.

Temperament & Intelligence of the Pekingese 🧠

The Pekingese is a very proud breed. They come from royalty and they really do seem to have remembered their regal status. They are also considered very intelligent dogs and are quite wary and suspicious because of this. However, while they are intelligent, they are not necessarily easy to train, unless they want to be.

The Peke will form strong bonds with his family and will form one especially close bond, typically with the person that feeds them and cares for them. They will get on with all members of the family, but the Pekinese is not the best breed for small children. They will not react well to being poked and prodded and may nip in defense if this happens. It can also lead to stress and anxiety for the dog.

The Pekinese is generally very happy with any dog of a similar size and will want to make friends with cats, possibly because of their similar size. They will not usually try and chase smaller animals, although introducing the Peke to any other family animal at a young age is ideal.

Things to Know When Owning a Pekingese:

The Pekinese can make a great family pet with grown-up children and is ideal as a companion for singles and seniors. However, as with any dog breed, you need to ensure that they are the right breed for you and your circumstances. There are several factors to consider when taking on this breed.

Although the exact amount you feed your Pekinese will depend on age, size, and health, a Pekingese will typically eat between a half to one cup of good quality dry food every day. You should look for foods that are high in nutrients, in order to keep their skin and hair in good condition.

The Pekingese enjoys getting out for a short walk every day. Expect to walk him for approximately half an hour. This breed has a flat nose, which means that too much exercise can lead to difficulty breathing, so you might want to consider two shorter walks, rather than a single walk. Although your Peke might enjoy playing a little, they really don’t require too much exercise each day.

The Pekingese is a small breed and does not require a large yard, but he will need house training. Any form of training with this breed requires consistency and firmness, although this never means physical reprimands. They do love their owners and are intelligent little dogs, but they are also very headstrong, and this can make them difficult to train.

The grooming requirements of this purebred dog are high. Their hair is long for their size, and they will shed. Brush your Peke at least twice a week. Be prepared to bathe them when necessary, but do not bathe them too often and always ensure that you use a sensitive shampoo that is designed for canine use.

You can also trim the hair around his eyes, which will enable him to see more clearly. If you are uncomfortable doing this yourself, have a professional groomer do it for you.

Check inside their ears and wipe away excess gunk with a clean cloth, although this isn’t a problem that the breed is commonly known for. Tear stains can be commonplace, and you should wipe their tears away to stop this from becoming an unsightly problem.

Finally, their claws will need occasional trimming. Ideally, you should start this when they are a puppy so that they will get used to it. Again, though, a professional groomer or even a veterinarian can do this for you, if necessary.

The Pekingese actually has a long average lifespan, despite the fact that there are a number of health conditions that they are prone to. For a start, almost all Pekingese are born by C-section and puppy mortality rate is high. The breed has also been bred with certain deformities because breeders believe this is what owners are looking for. In particular, you will need to look out for the following conditions and take your puppy for veterinarian care if he shows symptoms.

The Pekingese is one of the most popular of all toy breeds and makes a good companion pet. He requires minimal exercise but can be difficult to train and, despite having a long average lifespan, he is actually prone to a list of diseases and complaints. He also takes a lot of work to groom and to keep looking his best, but if you have the time then you will likely form a very strong bond with the Peke, and he will protect you.

The Peke can adapt to life in an apartment, will get along with most family members including cats, but he can be wary of strangers. This wariness may also lead to barking, and this can cause problems with the neighbors, so early training that teaches him when to stop barking should be considered an integral facet of owning this breed.

Overall, there is a reason for this breed’s popularity, and that is that he will form a very strong bond with his primary owner, and the bond is almost impossible to break.