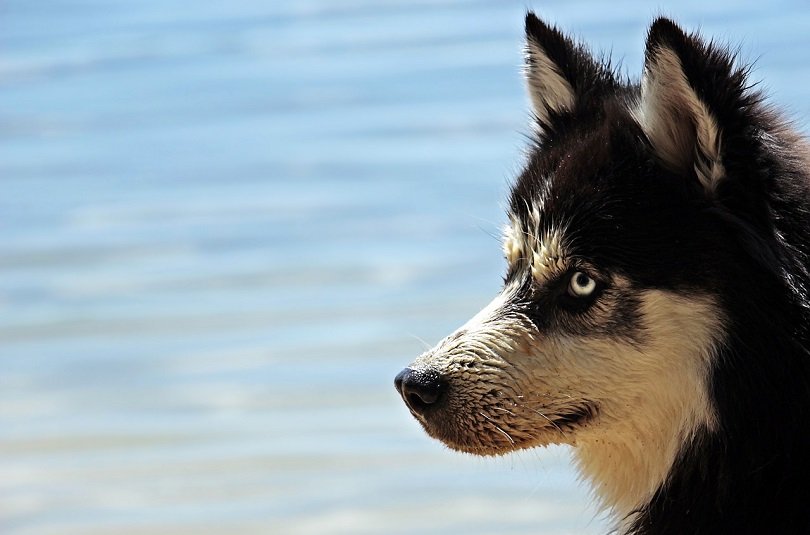 Ausky dogs are a hybrid of the Australian Cattle Dog and the Siberian Husky, which are both high stamina, incredibly intelligent, and work-oriented breeds. The resulting cross is one smart pup that does best with early socialization and plenty of jobs to do!

While they are relatively new to the breeding world and there has not been much research collected on them yet, we can look at their parent breeds for general character traits.

The Australian Cattle Dog, also known as the Australian Queensland Heeler or Blue Heeler, is a strong and compact dog. They were first developed in Australia to drive herds of cattle on long, arduous treks to market.

Several breeds contribute to their ancestry, but the two main ones are the dingo, the feral dog of the Aboriginals, and the Sottish Collie. Their key qualities are their amazing stamina, versatility, and precision when herding.

The Siberian Husky is quick, agile, and strong, as well as being a tireless worker. They were initially used as sled dogs to pull small loads. This medium-sized dog has a dense and wooly undercoat and is well insulated against the cold of its native Siberia.

They are believed to have been developed by the Chukchi Indians, natives of the region now known as Siberia, more than 3,000 years ago. Because of its isolation, the breed was kept very pure until the 20th century, when Alaskans began importing the dogs for sled racing.

Ausky Puppies – Before You Get One…

Siberian Huskies are heroes in much of American history. In 1925 teams of these sled dogs carried vital medicines to a town riddled with diphtheria when snows were so high that no other transportation could navigate – they traveled 674 miles in 127.5 hours! The breed also served as sled dogs in the U.S. Military during World War II.

Bluey, the Australian Cattle Dog from Victoria, Australia holds the Guinness World Record for the oldest dog. She lived for 29 years, 5 months – that’s 151 in dog years!

3. The Ausky Will Love Having a Job to Do

With both parent breeds being such hard-working canines, an Ausky will love to put their high energy & stamina to good use. They excel at distance running, agility courses, hiking, herding, and games. Try taking a long hike and giving them a small load of supplies to carry in a harness – they’ll love being useful.

Temperament & Intelligence of the Ausky🧠

Unlike many other dogs, here is not a long history of information on this hybrid breed. So, for personality traits and temperament of the Ausky, it is important to look at the parent breeds, the Australian Cattle Dog and the Siberian Husky, and extrapolate from there.

While quite different in build, the Australian Cattle Dog and Siberian Husky share several character traits. They are both bred as working dogs and are prized for their high drive & intelligence, as well as stamina & endurance. These dogs are very smart, and you can expect your Ausky to be as well.

There are also a few notable differences between the two breeds. Siberian Huskies are friendlier with strangers, can be quite independent, and enjoy having a larger family to interact with. Australian Cattle Dogs, on the other hand, are commonly considered a one-person dog and are more protective.

Though overall a friendly and outgoing dog, due to their herding heritage you should socialize your Ausky with children and strangers early on. For example, many Australian Cattle dogs can be wary of strangers at first and overly protective of their families.

The high energy of the Ausky can pair well with an outdoorsy child, though kids will be hard-pressed to tire this dog out. As long as your dog and children have a healthy mutual respect, they will make excellent companions. This smart canine will never let harm come to their family members.

Australian Cattle Dogs and Siberian Huskies are both usually even-tempered and tolerant in their relationships with dogs, cats, and other animals. But the key to a harmonious household with your Ausky and other pets is socializing them at a young age.

Though they are generally gentle, their “work dog” nature can make for some friction if an Ausky is under-stimulated or under-exercised. It’s all about individual personalities but be sure to give your Ausky plenty of exercise and enrichment opportunities so that they don’t try to herd everyone in the house.

Auskies, as with any dog, should be supervised around any small or prey animals in the family. They do not have much in the way of hunting instincts, but most athletic dogs enjoy a chase so if you plan on introducing your guinea pig to your Ausky it’s better to be safe than sorry.

Things to Know When Owning a Ausky

Welcoming a new family member, canine or otherwise, is a big decision. Here are a few bits of information to help you consider if owning an Ausky is right for you.

Finding a high-quality kibble to start with should be one of the first steps to making sure your Ausky has a well-balanced and nutritious diet. Stay away from cheaper brands that are mostly grain and look for a kibble that has a variety of nutrients from animal and plant sources.

Beyond just kibble, Auskies do well with a healthy serving of proteins and omega-3s. You can supplement their standard kibble with treats like fish, chicken, and even some fruits and veggies too! Talk with your vet for more in-depth information about proper portion sizes and appropriate foods.

Exercise is of critical importance to the health and wellbeing of your Ausky. The hard-working heritage and legendary endurance of both their parent breeds mean that an Ausky will crave regular physical and mental stimulation. Try giving them puzzle toys to keep them engaged when they cannot be outdoors.

Apartments are a no go because, even though the Ausky is a medium-sized dog, they need plenty of room to roam and do not like being kept in small spaces. Except a cooped up and bored Ausky to get destructive like an Australian Cattle Dog, or whine and howl like a Siberian Husky.

The Ausky and their owner will both see many benefits to training together from a young age. They are highly intelligent, and training will help put their work driven nature to good use and curb unwanted behaviors.

For example, the Siberian Husky is an explorer and has a reputation as an escape artist, so a strong and reliable recall is highly desirable. And Australian Cattle Dogs need early training and socialization to understand which herding behaviors are unacceptable, or they can nip at running children.

Training doesn’t just have to be a chore with a pay-off at the end – with patience and kindness both you and your Ausky should enjoy the chance to learn to communicate, work together, and get to know each other!

Though an Ausky has medium length hair, they require routine grooming due to the density and thickness of the hair. Their grooming regimes are fairly high-maintenance and not appropriate for dogs with hair and dander sensitivities.

Both its parent breeds shed quite a bit and have a double coat, so you can expect a dense undercoat and a smooth, hard outer coat. Brush your Ausky at least once or twice a week but be prepared for the possibility of daily brushings when Spring rolls around!

Nails should be kept trimmed to prevent cracking and discomfort. Their perky ears should also be kept wax and dirt free to prevent infections. Occasional teeth cleaning will help their gums stay healthy and even freshen their breath a little.

Auskies are generally healthy dogs. This is due in part to healthy parent breeds and also because hybrids are usually less prone to genetic diseases than purebred dogs. However, there are still a few common health conditions to be aware of.

Of particular note is that both Australian Cattle Dogs and Siberian Huskies can carry the Merle gene for blue eyes or heterochromia (different colored irises). As beautiful as it is, these strange eye colors can mean that your dog is more predisposed to various eye issues.

There are not many broad statements that can be confidently said about differences between male and female dogs of any breed. And when it comes to hybrid breeds that have not been around for more than a few decades, like the Ausky, this is just as true – if not more so!

However, you can expect males to be larger in size and more likely to display sexually aggressive behaviors like humping. Females are generally smaller and can be more reserved in temperament.

The Ausky is a lively, intelligent canine that loves working hard and playing hard.

But just like humans, every dog’s personality is unique and different. If you come to Ausky ownership willing to really meet one another and forge a life together, you will be rewarded with a steadfast friend that can keep up you on with any of your adventures.