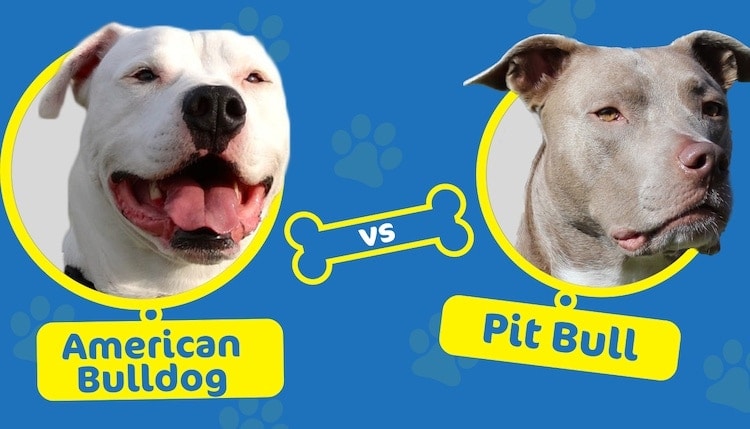 Few animals are as misunderstood as pit bulls. It seems like every time a dog attack makes the news, a pit bull is immediately blamed. They’ve become incredibly vilified, with many people calling for banning them outright.

But if you ever ask people to define a pit bull, you’ll be surprised at the answers you get. Most people have no idea what a pit bull actually is, and lump all manner of breeds into the same “pit bull” category.

One of the breeds that most commonly gets mistaken for pit bulls is the American Bulldog. While they share some surface similarities with Pit bulls, the American Bulldog is a completely different breed. Below, we’ll briefly run down some of the significant differences between the two dogs, so you can finally tell them apart — and better yet, maybe educate some other people along the way.

The Harrier and the Beagle have a lot of similarities, but they do have their set of unique characteristics. Let’s break it down.

Origins and History of the Breed

As you might expect, American Bulldogs descended from their cousins, the English Bulldog. Settlers from England brought those dogs to the United States, where they were then bred to be working farm dogs. This required making them larger, with longer snouts that made them capable of putting in a full working day herding cattle and warding off wild pigs.

As fewer Americans farmed for a living (and more turned to other working dogs like Australian Cattle Dogs and Border Collies to tend their livestock), the American Bulldog faded in popularity. The breed nearly went extinct in the middle of the 20th century, but the efforts of a few dedicated breeders brought them back from the brink.

If you’re comparing an American Bulldog to an American Pit Bull Terrier, the size difference is likely the first thing you’ll notice. American Bulldogs are much larger, and they can weigh up to 120 pounds. They’re often white with black, red, brindle, or brown patches, whereas pitties come in a wide variety of colors.

The reason why they’re often confused for one another is that they do share a few surface similarities. They both have broad heads and powerful jaws and broad chests that enable them to cut a striking figure.

If you ignored their physical appearance, though, you’d have a hard time telling the two breeds apart, as they’re very similar in terms of temperament. Both are friendly and loyal, both do well with children, and both are very active and require quite a bit of exercise and stimulation.

One of their most marked differences is in their ability to tolerate other animals. American Bulldogs usually do better with other pets (although they may try to herd them), but they still need tons of socialization as puppies to ensure no tragic accidents occur.

American Bulldogs have a very similar health profile as well. They’re also prone to hip dysplasia and cataracts, although not quite as likely to suffer from skin allergies. They typically live anywhere from 10 to 16 years.

Here’s the problem with defining pit bulls: few people seem to agree on what a pit bull is.

There is a distinct breed called the American Pit Bull Terrier, but other breeds like the American Staffordshire Terrier and Staffordshire Bull Terrier often get lumped into the “pit bull” category. When someone says they say a pit bull, they could mean any of these breeds, or maybe even a different type of dog entirely.

Origins and History of the Breed

The breed originated in very unfortunate circumstances. They were originally bred for the gruesome sports of bear- and bull-baiting, and once these were outlawed and disappeared, they were traditionally kept for dogfighting. We’d love to say that dogfighting has also ceased to exist, but unfortunately, there seems to be no end to the cruelty some people can show animals.

Indeed, criminal elements have long been enamored of pit bulls. They use them to guard drug houses and chop shops, or simply to sic them on unfortunate bystanders and law enforcement.

On the sunnier side of the ledger, they’ve also been used as working dogs by farmers and ranchers to help round up stray cattle. Law enforcement has also dabbled with their use, and they’re sometimes used as therapy dogs (not to mention the fact that they’re fantastic for cleaning ice cream off your mouth).

True American Pit Bull Terriers are medium-sized dogs, weighing between 30 and 60 pounds. They have short, bristly coats in a variety of colors and patterns, and their tails are thick and tapered.

It’s their heads that usually make them stand out. They have big, blocky heads, and medium-sized ears that stand and flop over, though they’re often cropped. They also have extremely expressive, almond-shaped eyes.

These are strong, muscular dogs, but despite their buff appearance, they’re still prone to a few serious health problems. The most prominent of these is hip dysplasia, but they’re also commonly afflicted with cataracts, heart disease, and allergies and skin irritations.

Their typical lifespan is 12 to 14 years, so you should have a fair amount of time with your pet if you adopt one. They require regular exercise, as they’re an active and energetic breed, and their extremely high prey drive may make them unsuitable for homes with cats and other small pets.

All of this calls into question one of the most hotly-debated topics concerning pit bulls: their temperament. While critics would say that they’re extremely aggressive animals that are just waiting for the right opportunity to go ballistic, there’s little evidence to support this. Most of the aggressive dogs were conditioned to be so or were placed in unfortunate circumstances that they weren’t trained for.

Instead, most pit bulls tend to be playful, curious creatures, which can be fiercely loyal to their human companions. In what will no doubt come as a shock to all the criminals and lowlifes out there, pit bulls actually don’t make good guard dogs, as they’re too interested in befriending strangers.

They tend to do especially well with children, and in fact, were once called “nanny dogs.” However, if you’re going to have them around kids, both the dog and children need to be well-trained (up to you whether you want to keep the kid on a leash).

Their biggest glaring weakness in the temperament department is how they deal with other pooches. They’re prone to aggression towards other dogs unless they’re properly trained and socialized, so you have to be extremely dedicated to their ongoing education if you plan on owning one.

American Bulldogs and American Pit Bull Terriers are very similar, but they do have a few key differences. These differences aren’t enough for us to make a sweeping claim that one is “better” than the other, but that doesn’t mean that one might not be better for your particular situation than the other.

The fact of the matter is that, through little fault of their own, pitties have become victims of breed discrimination. This can make owning one difficult, especially if you don’t own your own home. Also, if you have other pets at home, an American Bulldog is probably a better choice than a pit bull.

However, assuming you train and socialize it well, either breed can make a fantastic pet for you and your family. You should also keep in mind that many animal shelters are overflowing with pit bulls, so you can truly make a difference in an amazing dog’s life by adopting one.

When it comes to the Pitbull vs American Bulldog, regardless of which breed you end up getting, there is one thing we can tell you with absolute certainty: if you get too close to it, it will lick your face.