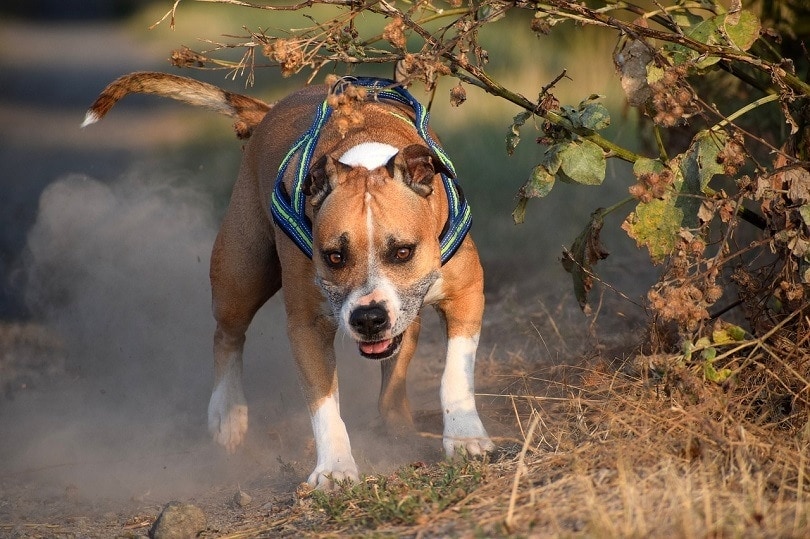 The modern American Staffordshire Terrier as we know them had its ancestors in England and came from mixing Terrier breeds and bulldogs. They were known as many names, including Pit Bull Terrier, Half and Half, and Bull-And-Terrier dog. Finally, they were called Stafford Bull Terriers. In the past, they were used by butchers for managing bulls, hunters for bringing down the wild boars, and the farmers for family companions, working the farm, and taking care of the rats.

If you are thinking of getting an American Staffordshire Terrier, read on to find out more about these amazing dogs.

When people think of American Staffordshires, they often will picture a vicious dog who is always showing up on the news as seriously injuring a child or another dog, or worse. But the truth is that these dogs are extremely friendly, and they are wonderful dogs for a family. If you want to learn more about this breed, please read on and find out the truth.

It’s a good idea to look around for a reputable breeder for your puppy, and these can be found at dog shows. A sign of a good breeder is that they’ve done genetic testing on their dogs to see if they’re good to breed.

Another good sign is that they have neuter and spay contracts. The breeder also won’t sell puppies to just anyone. They will screen the homes carefully and ask lots of questions about the expectations you have of the dog, your lifestyle, your family and your job.

You should expect that you’ll be put on a list or thoroughly interviewed. A puppy that is well-bred is going to be worth the effort and time.

1. The modern American Staffordshire Terrier comes from crossing a bulldog with a terrier in the past.

2. The breed grew popular with ranchers and farmers due to their guarding abilities and companionship.

3. They are naturally aggressive towards other dogs. However, they’re friendly with humans, and aggression can be overcome with training.

American Staffordshire Terriers have a confident, impressive presence, so people are surprised to find out how easygoing they are. They’re good-natured, reliable, and devoted.

They are also very playful, loving and loyal, and they love spending time with their human family. Although they aren’t very large, they’ve very muscular and strong, which makes it difficult to walk them without the right training.

They’re known for their very strong jaws, which are used for chewing while bored. They need mental and physical stimulation to keep from being bored.

Even though they’re often purchased and used for guarding, their love for people makes their ability to guard more due to intimidation instead of anything else. Since most people think of them as aggressive and they have a muscular build, this is what deters intruders the most, even though this is a mostly undeserved reputation.

They share a lot in common with American Pit Bulls, since they both were used for illegal dogfighting and that is why they are often banned. But when the American Staffordshire’s brought up in a loving home with the right socialization and training, they are affectionate, docile animals.

These dogs can be often stubborn, but they will respond well to a confident dog owner. You just have to know the way to set and establish the rules of proper dog behavior.

They are loyal and friendly dogs who love humans.

Many of the American Staffordshire Terriers are able to live very peacefully with other pets. However, if they’re confronted by another dog who is assertive, they’re ready to engage.

Things to Know When Owning an American Staffordshire Terrier:

If you are still with us, great! That means you’re interested in knowing more about these wonderful dogs. Now we are going to help you learn about what it’s like living with an American Staffordshire Terrier and what you should expect from their day-to-day care.

When you are choosing the food for your American Staffordshire, choose high-quality food. Look for food that is appropriate for the age of your dog. Some of them are prone to weight gain, so make sure you’re keeping an eye on his calories.

You can use treats when training your American Staffordshire, but keep an eye on them and don’t give too many or your dog will become obese.

American Staffordshire Terriers are energetic, athletic dogs, and they require lots of exercise. You don’t want to leave him outside in your backyard all the time, though. Even though he will have a lot of space to run around, he’s people-oriented and loves spending time with his family.

Spend time playing with him and this will help with developing his psychological and physical health. Not only that, but a lot of the American Staffordshire Terriers love doing things such as dock diving, obedience and agility.

Because of their strong will, exuberance and physical strength, it’s necessary to do puppy training and early socialization with your new American Staffordshire Terrier. They love to please their owners and this, combined with their intelligence, makes it easy and fun to train them. That being said, some behaviors, like digging and chewing, are often difficult to resolve.

It’s also important to note that aggression towards dogs can occur even when your American Staffordshire is well-socialized. You should never leave him alone with another dog.

American Staffordshires have smooth short coats with glossy, stiff hair. This hair will shed twice per year when the season changes and will only shed a little during the remainder of the time. You should brush your dog each week because this will keep his coat shiny. It’s only necessary to bathe him as needed, and this will only be three or four times per year unless he gets dirty. The nice thing about this breed is that it doesn’t have what’s affectionately called the ‘doggy odor’, which means he can go along time without a bath.

Along with keeping his coat brushed, there are a couple of other things you should do to keep your dog healthy. American Staffordshire Terriers often have bad breath. Therefore, you should brush the dog’s teeth each week at a minimum, even more, if you can. This will help with preventing the formation of the germs that cause bad breath.

You should trim their nails as needed, though, they don’t really like their paws being touched, so this could prove difficult. It’s a good idea to start training them early so that they’re comfortable with grooming and touching.

You should also check your American Staffordshire’s ears each week, looking for debris and wax buildup, then clean them as needed. This will help your pup avoid infestations of pests and ear infections.

American Staffordshire Terriers are generally healthy, but they do have a few health issues that you should look for.

American Staffordshire Terriers are family dogs who love spending time with their family. It doesn’t matter what kind of activity is happening. Whether you’re walking in the woods, laying on your sofa, or playing in your back yard, your dog will want to be with you.

Even though they’re considered guard dogs, they will generally greet a stranger with affection and charm. It’s mostly their undeserved aggressive dog reputation and muscular build that will keep intruders away.

Remember to replace this with the relevant info for this dog breed!