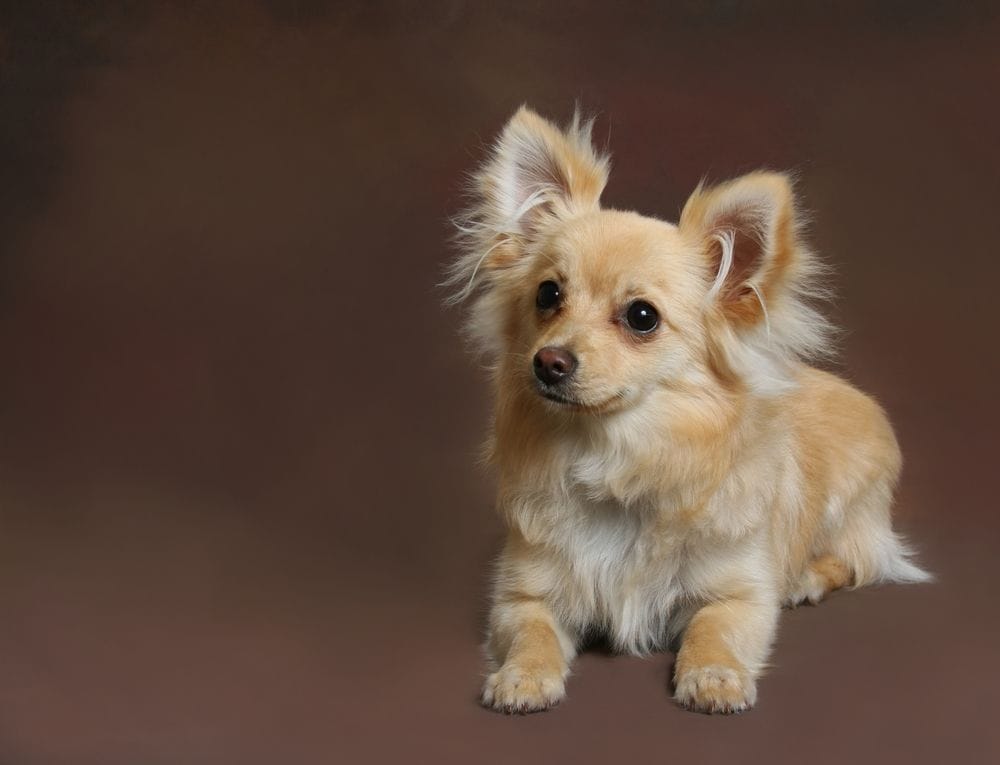 The Pomchi is an adorable ball of fluff created by breeding together Pomeranians with Chihuahuas. They have a great deal of spirit while simultaneously being affectionate dogs who form strong bonds with their family members.

Pomchis are incredibly small dogs, although they don’t realize it and often develop “small dog syndrome” if the trainer isn’t careful. They believe that with their “vicious” bark, they are protecting their family and guarding the property. This behavior is why they can make good guard dogs, immediately warning their families of those approaching.

As with all hybrid mixes, the Pomchi inherits a bit of both of their parents. It is easier to figure out what kind of dog you are getting with a Pomchi, though, because there are many shared traits between Pomeranians and Chihuahuas.

Pomchi Puppies — Before You Buy…

What’s the Price of Pomchi Puppies?

Pomchi puppies don’t just inherit physical and personality characteristics from their parents but also inherit the value from them. If one or both of the parents is a desirable, expensive breed, the cost of the hybrid can be almost equally high.

Although crossbred pups are typically less expensive than their purebred counterparts, this is not always the case with Pomchis. A Pomchi is a relatively new hybrid and is quite a desirable one, at that.

The cost for a Chihuahua is around $500 to $1,500 from a breeder, running at around average for a desirable purebred. Pomeranians typically fall in the same cost bracket, although both of the breeds can be much more expensive if they have a superior pedigree or come from a top breed line.

The price of a Pomchi is not that much less than its purebred parents because it is such a lovable and desirable pet. They cost anywhere from $500 to $1,500 depending on the pedigree.

3 Little-Known Facts About the Pomchi

The Pomeranians that we know and love today are small and cute. However, they weren’t always such a tiny dog breed.

The dogs were initially bred in northern Europe along the Baltic sea. Historically, the region was called Pomerania and is now split between Germany and Poland. Their average size was around 30 pounds, and they are believed to have been bred from sled dogs, giving them their beautiful double coat.

Pomeranians were developed as herding dogs for a time but quickly became more popular throughout the region as a companion dog. They kept the company of some of the most renowned scientists and artists throughout history, including Michelangelo, Mozart, and Newton.

Pom pups became a beloved dog of 18th century English royalty when a princess from Pomerania moved to England after marrying an English prince. She brought her dogs with her, and Queen Victoria became enamored with them.

This time was when the size of the Pomeranians began to grow smaller. Queen Victoria bred them to be around 12 pounds, and after her death, other breeders even further reduced their size to become closer to the Pom we know today.

2.  They can make a good watchdog.

The Pomchi inherits a loud, shrill bark from both of its parents. They can make a good watchdog because they are always alert. They like to think that they make the best kind of protector for their home. When they sense an unknown presence approaching, they bark quickly and loudly to alert anyone else around.

If barking without provocation is an undesirable trait in a dog, they can be trained out of this behavior. Since it is a natural tendency, however, they need consistency and patience.

3.  The origin of the Chihuahua parent is still a mystery.

There are boundless theories about the origin of the Chihuahua, although only a couple that stands the test of historical knowledge and testing.

One theory is that the Chihuahua originates from China, being brought back to the European continent along the Silk Road when contact was first made between the two countries. Spanish conquerors took their tiny compatriots to sea with them, delivering them to the shores of South America.

The other theory is that they were located in South America all along. The dogs would have supposedly come from an even smaller breed of dog called the Techichi. Natives bred these dogs in South America for food and entertainment for children. They are now extinct.

Either way, the first modern recording of the affirmed Chihuahua breed was discovered in the Mexican state of Chihuahua. They were brought up to America in the 1800s and became registered with the AKC in 1904.

Temperament & Intelligence of the Pomchi

Although the temperament of the Chihuahua can be offsetting to some people, the Pomeranian is a charmer wherever they go. Pomchis tend to favor the Pomeranian heritage and are affectionate devoted pets.

These dogs are not laid-back, though, however sweet they might be. They have large and sometimes loud personalities. They inherit a stubborn streak from both of their parents, which makes it difficult for a first-time dog owner to train correctly.

They inherit intelligence from both sides of the family, which makes it easy for them to catch onto new ideas and commands. If the dog finds a love for learning new things, they make an adorable master of tricks, loving to be the center of attention, performing in front of anyone who cares to watch.

Pomchis are not working dogs, preferring to spend long hours in the home in the company of their loved ones. They do not like being alone and may develop separation anxiety if left too frequently.

These little dogs are perfect for families. But if you have young children, keep a close eye on your dog when around the kids because the Chihuahua side of them can have a short temper. They are not aggressive but may be reserved or run away after consistent pokes and prods.

The Pomchi is relatively social but prefers to be the center of attention. Early socialization is crucial if you want to add more pets into the home after Pomchi has grown up.

Things to Know When Owning a Pomchi

Since Pomchis are quite small dogs, they only need an average of 1 ½ cups of food a day, with a maximum of 2 cups. Talk to your vet about the best diet to put your Pomchi on; with the right food, they can live an exceptionally long life.

Don’t free-feed your pup. Instead, put it on a schedule of two meals a day, usually morning and evening.

Pomchis are excitable and can be described as little powerhouses. Due to their size and general breeding, though, they are a medium energy dog with moderate requirements for activity.

On average, try to take your Pomchi out for walks or consistent activity for at least 45 minutes every day. Over the week, make it a goal to take a walk your Pomeranian Chihuahua Mix for an average of 8 miles a week.

Pomchis are quite intelligent, inheriting their clever genes from both sides of their family tree. They quickly catch on to new ideas and can be trained, starting from only 12 weeks old.

The critical part of early training sessions is to establish yourself as the dominant one in the pack. You need to prove to them that you can tell them right from wrong. Establishing this dominance in a kind but firm manner helps future training sessions run smoothly.

The Pomchi usually inherit the double coat from their Pomeranian parents. They typically have long, dense hair that requires daily brushing to prevent tangles and mats. Depending on the type of coat they inherit, consider taking them to a groomer.

Pomchis commonly suffer from ear infections, and any dirt or seeds caught in the fur need to be cleaned away. Use a soft, damp cloth to wipe them out a couple of times a week.

As with every dog breed, keep their nails trimmed whenever they grow longer. Brush your puppy’s teeth a couple of times a week because small dogs commonly have teeth problems.

Chihuahuas are one of the longest-living breeds currently known. Many of their descendants and crossbreeds are long-lived as well. If Pomchis are properly cared for, they can live substantially longer lives than an average dog.

As is a common characteristic in all dog breeds, Pomchi males usually are larger and heavier than their female counterparts.

Size isn’t the only difference between Pomchi genders. The personalities between males and females vary as well. Pomchi females tend to be more independent and more aloof, wary of strangers and new animals. Males are more outgoing, friendly, or loud, depending on the situation.

Final Thoughts on the Pomchi

People looking for an adorable addition to their family will find great companionship in the company of a Pomchi. Although it can take work to get them accustomed to having a boss, once dominance is established, their intelligence helps them learn quickly.

A Pomchi is a sweet pet for singles and seniors, encouraging them to maintain a certain amount of activity each day for both their health. The Pomeranian Chihuahua Mix has the potential to be your cuddle buddy for many years to come.