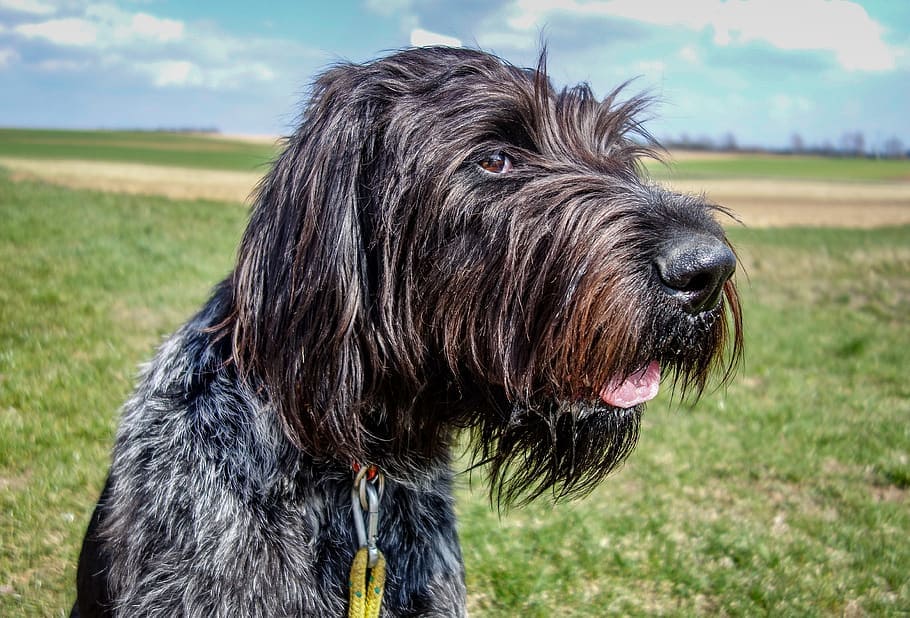 While a Pudelpointer might sound like yet another modern designer crossbreed, the idea of mating German water poodles with British pointers is actually over 100 years old. Baron von Zedlitz, a popular sportswriter in 1880s Germany, encouraged German hunters to breed native Pudels with English imports and create an unparalleled hunting dog.

Borrowing genes from 11 different Pudels and more than 80 pointers, von Zedlitz and his friends eventually achieved their goal, and the Pudelpointer was born. Today, Pudelpointers are still gun dogs, bred for their hunting ability — but also deeply loving, eager-to-please house dogs.

They’re rare in the United States, and not yet recognized by the American Kennel Club, but a small, devoted following will sing their praises. If you’re ready to make friends with this dedicated, loyal, and adventurous German pup, read on and check out our guide to all things Pudelpointer.

Pudelpointer Puppies – Before You Get One…

1. Most Pudelpointer Enthusiasts Don’t Want Them Recognized by the AKC

The Pudelpointer is old enough by far to receive official breed status from the American Kennel Club. However, AKC requires registered breeds to maintain a uniform appearance. To Pudelpointer owners and breeders, selecting for physical traits instead of hunting prowess would turn away from what makes them unique.

Thus, Pudelpointers are hard to find in the United States, and their appearances can vary wildly. If you’ve ever spent time with one, you’ll almost certainly agree that it’s worth it!

2. Pudelpointers are Some of the Canine World’s Best Hunters

Since Pudelpointers are bred for hunting ability instead of appearance, each individual must undergo field tests before a breeder can use it to produce puppies. In the tests, hunting dogs must track large and small game, cross fields quickly, and retrieve kills from the land and water. The same tests are used for other gun dogs, but Pudelpointers are one of the few breeds that outperforms in all areas.

Think of the German Pudel not as an English or French poodle, but as a water dog. This designation is older than it might seem: the name “poodle” originally comes from a German slang word for splashing around in water.

The modern Pudelpointer’s coat is dense and wiry, which sheds water while helping retain body heat. Pudelpointers love to hunt waterfowl and retrieve game from water, but they’re also big fans of swimming for its own sake.

Temperament & Intelligence of the Pudelpointer 🧠

While there’s a lot of variation between Pudelpointers in terms of appearance, speed, endurance, and other traits, their personalities are more standard. Pudelpointers are curious, constantly investigating what’s over the hill and around the bend. They bond easily with humans, love to know what their owners are up to, and are chill and relaxed once they’ve worked out their energy.

They also love to play, and rarely take their hunting jobs too seriously — they’ll run hard to catch prey, but they’ll have a good time doing it. Pudelpointers like to work hard and play gentle. Highly intelligent, they’re 100 percent willing to be trained, and all they ask in return is your affection and company.

Very much so. In fact, in the 35 years North America has been keeping track of dog-bites-human incidents, no Pudelpointer has ever been observed to bite.

Pudelpointers love spending time with children. They act protective and loving around members of their pack. Those family-oriented poodle genes are strong. Don’t forget that von Zedlitz’s acolytes had to use eight pointers for every poodle involved in breeding the Pudelpointer. When the hunt is over, Pudelpointers love pats, playtime, and attention as much as any Poodle.

That doesn’t mean they’re lapdogs at home, though. Their fierce intellect makes them alert guard dogs, and they never let a stranger go by without barking. It takes a bit of socialization training to get them to accept new people, but they shouldn’t have any behavior problems as long as you acknowledge and work with their watchful streak.

Pudelpointers do best with other animals when introduced to them early on. Start them around your other dogs as puppies, and they’ll grow up learning not to chase their adopted littermates.

With cats and smaller pets, things can be more difficult. The chasing instinct is bred so hard into Pudelpointers that even being raised alongside a kitten won’t completely cancel it out. If you have smaller animals loose in the house, Pudelpointers might not be the right breed.

Things to Know When Owning a Pudelpointer:

Your Pudelpointer is a big dog with an active personality, so it will do best on dog foods formulated for working breeds. If it’s primarily a house dog, it can thrive on four cups of dry food every day, plus plenty of water. Feed it like clockwork twice a day, and don’t go overboard with the treats.

If you’ll be using your Pudelpointer as a gun dog, it’ll need more calories on working days. Supplement a working Pudelpointer’s diet with raw meat and fresh produce to make absolutely sure it’s getting all the protein it needs.

Bred as runners, dogs from this breed need a lot of exercise to burn off their energy. Walk or jog with your Pudelpointer for at least an hour every day. When not taking them out on the leash, let them run around in a large fenced-in yard as much as they want. The bigger the property, the better the Pudelpointer habitat.

Pudelpointers love catching Frisbees, fetching balls, and hiking with its owners. However, their true love will always be swimming. Toss a floating ball in a pond, lake, or gentle stream, and watch your Pudelpointer go nuts time after time.

Pudelpointers are one of the most training-ready dog breeds on the planet. Smart, committed, and hungry for praise, your Pudelpointer will be an active partner with you throughout its training process.

Whether you train them yourself or choose an obedience school, your Pudelpointer should be trained with positive reinforcement. They are not stubborn dogs, and won’t try to get their way, but they will stop listening to a master who shouts and threatens too much. Like with most hunting dogs (Cocker Spaniels are another good example), you are already the “alpha” with a Pudelpointer. Your job is to be a leader, not a taskmaster.

Coat quality varies between Pudelpointers, as does shedding rate, though it’s never all that bad. Give your Pudelpointer a firm brushing 1-2 times per week, depending on the length of their fur. With their love of water, bathing is easy, so give them the occasional bath when they need it.

Pudelpointers’ nails grow fast, so make sure to trim them when they get too long. Brush their teeth 2-3 times every week. When you brush their fur, check for wax in their ears, and clean it out if too much seems to be building up — otherwise, it can lead to uncomfortable infections.

Bred for hardiness and intelligence instead of uniform appearance, Pudelpointers are one of the healthiest pure breeds you’ll ever find. They have long lives and will remain active the whole time. The only ailments they suffer from are those common to all large dogs.

Bloat: A potentially fatal symptom in deep-chested dogs that occurs when they eat too fast. Bloat causes a gas buildup to twist a dog’s stomach over itself. To reduce the risk of bloat, use a slow feeder, or train your Pudelpointer to eat carefully.

Allergies: Just as serious in dogs as they are in humans. If your Pudelpointer has a severe allergy to anything, they could be hurt or killed. Usually, it’s not hard to adjust their lifestyle to keep them away from the allergen.

Epilepsy: Some Pudelpointers in the past have been genetically prone to seizures. Pudelpointer breeders are diligent about spotting the epilepsy gene and removing it from the pool, but there’s no such thing as total certainty.

Eye Issues: Pudelpointers’ eyesight can sometimes degenerate when they get older.

On average, male Pudelpointers grow taller than females and weigh slightly more when fully grown. There’s little to no difference in their personalities that can be attributed to sex.

Pudelpointers have a lot going for them. In selecting for hunting traits rather than beauty, their breeders have made them tough, smart, friendly, and able to handle a wide range of tasks and conditions. There’s no dog that can run for hours and then collapse on the couch with you quite like a Pudelpointer.

They’re not easy to find in the U.S., but if you look past AKC designations and open your mind to the idea that a gun dog can also make a family pet, you’ll be ready to embark on a wonderful journey with your new Pudelpointer.