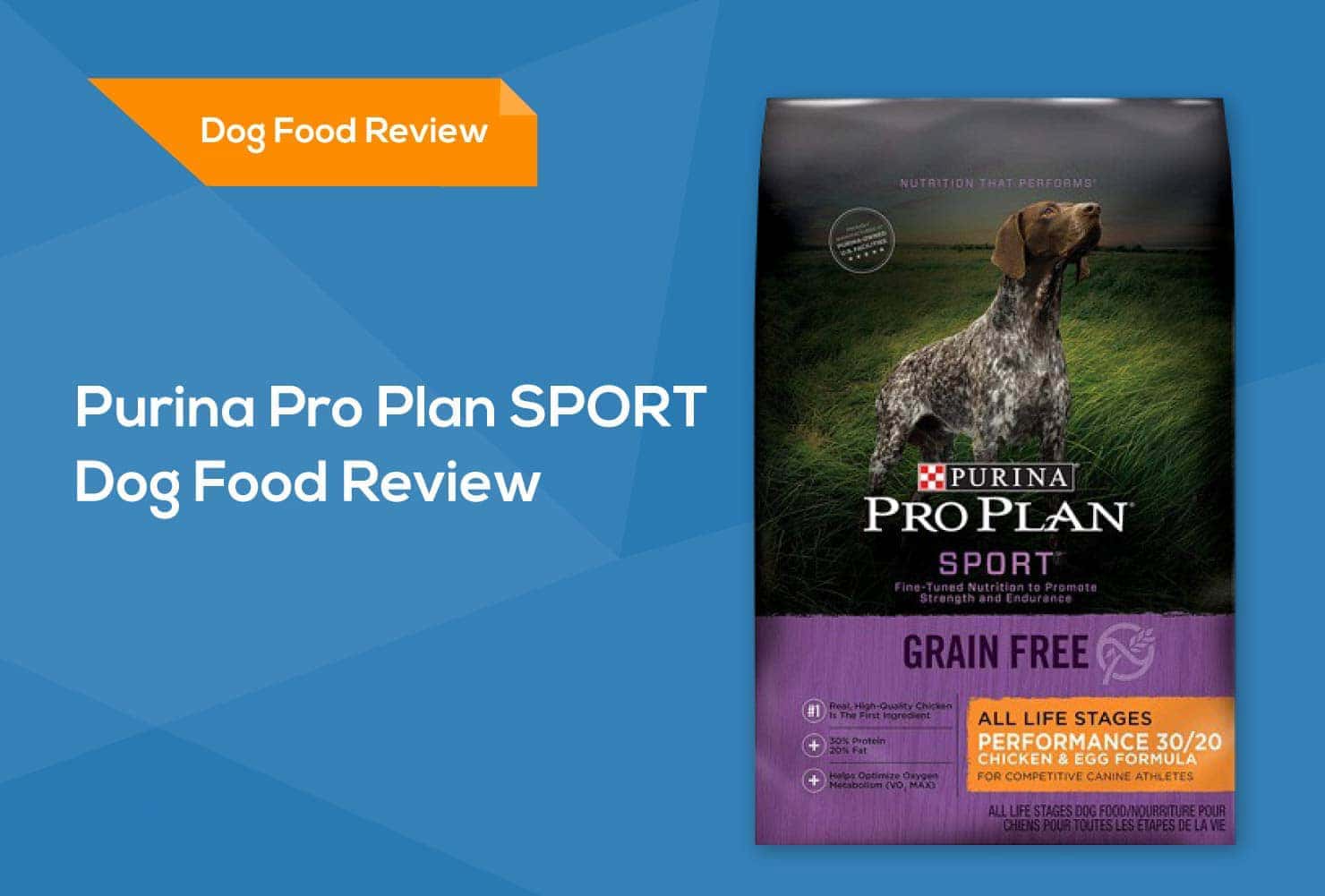 We give Purina Pro Plan SPORT dog food a rating of 4.3 out of 5 stars.

NOTE: There’s a large disparity in quality between the regular SPORT foods and their grain-free  recipe, which would be rated much higher on its own. We will cover this in more detail below.

Even non-dog owners are familiar with the Purina brand. The company is over 100 years old, and it started out producing food for farm animals. In 1926 they started to make food for domestic critters as well, and ever since then they’ve been one of the biggest pet companies in the world.

In 2001, they were acquired by Nestle, which merged them with their Friskies PetCare Company to create the second-largest pet food company in the world, trailing only Mars Petcare, the manufacturer of Pedigree and Whiskas.

Purina’s food is made in several different plants in the United States, as they have factories in Wisconsin, New York, Minnesota, Missouri, and more.

Who makes Purina Pro Plan SPORT and Where is it Produced?

Purina Pro Plan SPORT is made by Nestle Purina PetCare, a giant pet food corporation. The company makes a wide variety of food and treats for dogs, cats, and other animals.

Most of their food is made in the United States in one of the company’s many food-processing plants.

Which Types of Dogs is Purina Pro Plan SPORT Best Suited For?

As you might have guessed from the word “SPORT” in the title, this food is designed for active pups. It has quite a bit of protein to build lean muscles, but it’s also high in calories, so your dog will need to be a go-getter to keep the pounds off.

Any pooch struggling with her weight will likely find this food to be too calorie-dense. That’s especially true given that the kibble is packed with filler grains like wheat and corn, which are full of empty calories.

Instead, try a weight-management formula like CRAVE Grain-Free High Protein.

The first two ingredients are chicken and chicken meal, and that’s about as good of a start as you can have. The lean chicken is a great source of protein, while the chicken meal is packed with essential nutrients that aren’t found in lean cuts of meat.

Next is cassava root flour. You may not be familiar with this ingredient, but it’s very similar to tapioca. It’s a low-glycemic carbohydrate, meaning it will give your dog long-lasting energy without spiking her blood sugar too high. It’s a great alternative to flours made from wheat.

Dried egg product is up next, and this gets a mixed review from us. On the one hand, it’s a great way to boost the fiber content in the food, but on the other, many dogs have problems processing eggs. If your dog can handle it, though, we wouldn’t worry about her eating it.

Other ingredients we like include beef fat, fish oil, canola meal, and dried beet pulp, all of which offer several important vitamins and minerals (most notably omega fatty acids and fiber).

Have you ever seen the diets that elite athletes like Olympic swimmers eat? You’ll be amazed at how many calories they put away, and for good reason: they need every bit of energy they can get to perform at their athletic peak.

Now, if you eat like an Olympic swimmer but sit around watching Netflix all day, you’re going to have a problem.

The same goes for your dog. If you want to feed your dog a high-calorie food like this, you’d better be sure she gets all the exercise she needs, or else you’ll have a pudgy pooch on your hands.

This Food is High in Protein and Fat

Piggybacking off our previous point, this food is high in protein and fat — which is good if your dog is energetic. Fat and protein both give your pup long-lasting, slow-burning energy, rather than the short bursts you’d get from a carb-heavy diet.

Of course, if you don’t put that energy to use, it’ll just get stored in the belly.

This is one of Purina’s Pricier Foods

Most of Purina’s foods are budget-friendly, and the reason why they can afford to charge less is because they pack those foods with cheap ingredients like filler grains and animal by-products.

Purina Pro Plan SPORT’s grain-free option doesn’t do this, and as a result, you’ll end up paying more for it than you might be accustomed to.

If you’re looking for a compromise, the non-grain-free SPORT recipes do have some of those cheap ingredients, and they’re a bit cheaper. We feel it’s worth the extra few bucks to go grain-free, though.

Purina Pro Plan SPORT has never had any foods in its line recalled, but the Purina brand has dealt with two incidents in the past decade.

In August 2013, the company recalled its Purina One Beyond line due to fears that the kibble had become infected with Salmonella. Only one such bag was found, and no injuries or deaths were reported.

Three years later, they recalled their Beneful and Pro Plan wet foods due to concerns that they didn’t have the listed number of vitamins and minerals. The food wasn’t thought to be dangerous, and no animals were affected.

There are several different recipes in the SPORT line, each of which has different ingredients and nutrient levels. We picked three of the most popular and took an in-depth look at each:

This food is somewhat out of place in the SPORT line, and indeed it stands out among nearly all of Purina’s foods.

That’s because it’s a fantastic kibble, with very little to complain about. Unlike many of the other SPORT recipes, this one doesn’t use cheap ingredients like filler grains or disgusting animal by-products.

Instead, it relies on things like cassava root flour to fill out the kibble and provide carbs. This flour is much healthier than whole wheat or corn meal, two common ingredients found in other Purina foods.

Also, it’s packed with omega fatty acids and high in protein, which we love.

If we had to complain about anything, it would be the relatively high amount of salt inside, as well as the fact that many dogs have trouble digesting dried egg product.

Beyond that, though, this is an excellent food, and one that puts many of the company’s other kibbles to shame.

It’s kind of jarring to go from the grain-free formula to the regular SPORT recipe, as the former shows that Purina clearly understands how to make a great food if they want to. While the salmon formula is an above-average kibble, it’s decidedly not in the same class as the grain-free option above.

First, the good news: with ingredients like salmon, fish meal, and fish oil, your dog will get a ton of omega fatty acids from this food. That’s good for everything from her brain to her coat.

Also, there’s just as much fiber and fat as in the grain-free formula, so active dogs should get all the fuel they need from eating this.

However, there are several ingredients here that aren’t in the grain-free formula, and almost none of them are good. You’ll find lots of corn, poultry by-product meal (which is just as nasty as it sounds), and animal fat. What kind of animal? If you must ask, you don’t want to know (and chances are they couldn’t figure it out anyway).

There’s also less fiber in here and just as much salt.

The thing is, we wouldn’t have nearly as much of an issue with this food if they didn’t make the vastly superior grain-free option. It’s just hard to imagine why they saw fit to put these two foods in the same product line.

As you might expect from their chicken formula, the first ingredient is…turkey. This is just the start of the confusing issues we had with this food.

That’s not to say it’s a bad food, because it’s not — it’s really good. It just lives as some sort of weird compromise between the two foods listed above.

It ditches the corn and wheat for barley, which is a much healthier option. While it doesn’t have the same amount of off-putting animal by-products in it as the salmon formula, they’re still there (witness the mysterious “animal fat”).

The chicken flavor comes from chicken meal, which has many important nutrients like glucosamine in it. They also add in a bit of plant fiber as well, likely to compensate for the reduced amount of animal protein they use. This kibble still has less protein and fat than its two compatriots above.

There are a few other healthy foods mixed in, like sweet potatoes, carrots, and tomatoes. Again, this is a good food, and one we can recommend; it’s just hard to figure out how it’s related to the other foods in the product line.

Purina’s Pro Plan SPORT line is one of the more confusing product lines we’ve come across. The foods vary wildly in terms of quality, and it’s hard to give a blanket assessment as a result. Some of them (like the grain-free formula) are quite excellent, while others use far too many suspect ingredients for our liking.

Under the circumstances, the best we can do is to urge you to examine each recipe individually before buying. If you don’t see anything questionable in the ingredients list, you likely have an excellent food on your hands. If the kibble’s full of corn, wheat, and animal by-products, you have what is, at best, an above-average food.