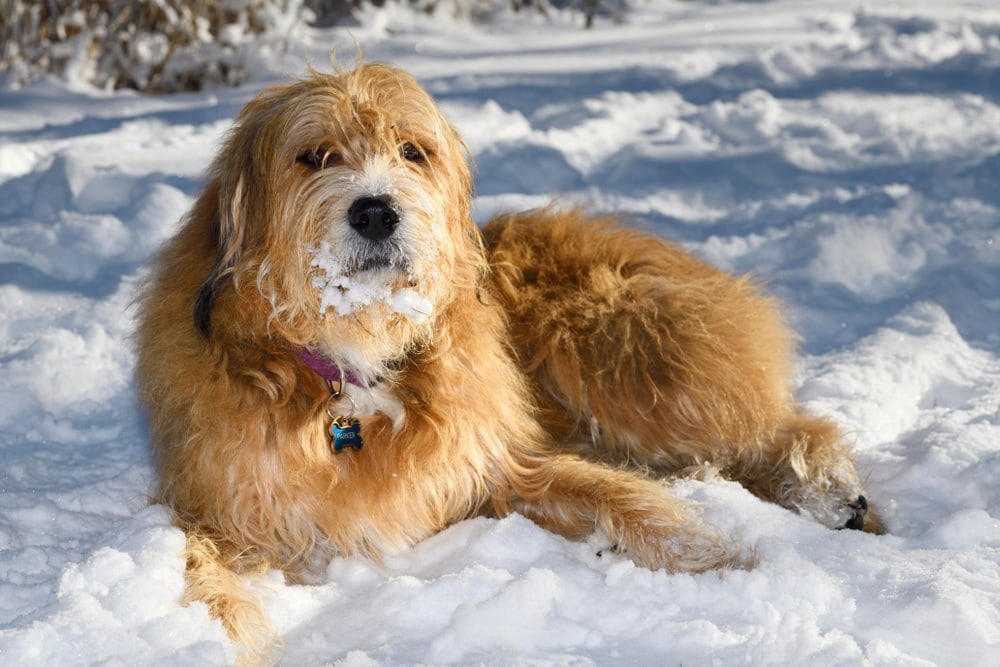 The Pyredoodle is a cross of the Great Pyrenees and Standard Poodle. He can be quite protective of his pack, preferring to bark rather than bite, which makes him a great family guard dog, and he is loyal and loving. He will usually be attentive but gentle with young children and mixes well with other pets.

The breed is a designer breed, dating back to the 1980s. Breeders chose the Standard Poodle because it is a low-shedding dog, and the resulting Pyredoodle is great for those with asthma and allergies due to his low shedding.

Although the Pyredoodle himself is quite a new breed, his parent breeds have plenty of history. The Standard Poodle originates from Germany and was first seen in the 16th century, while the Great Pyrenees dates back to the 17th century and hails from the Pyrenees mountains in France and Spain.

Pyredoodles are a large breed and often referred to as gentle giants. Although they enjoy time outdoors and relish exercise, they are also equally happy sitting in front of the fire or on your lap.

Pyredoodle Puppies – Before You Buy…

What’s the Price of Pyredoodle Puppies?

Pyredoodle puppies are a popular breed of large designer dog and depending on their characteristics and the breed you choose, expect to pay between $700 and $2,500. The typical price is around $1,200.

Always be careful if a breeder is offering puppies at rates below this level. It could be an indication of poor health or overbreeding. Stick to the old adage that if something seems too good to be true, it probably is.

Breeders chose the Standard Poodle parent breed because it sheds very little, if at all. The resulting designer breed has similarly low shedding qualities in a lot of cases, which makes it a great choice for owners with asthma or allergies. Although no dog can ever be truly hypoallergenic, low shedding and no shedding breeds are as close as you can get. The level of shedding is dependent on which breed is dominant, however, because the Great Pyrenees tend to shed vociferously twice a year: a phenomenon that owners often refer to as a snowstorm because of the large volume of white hair that is produced.

2. The Poodle Is Considered Extremely Intelligent

Another good reason for choosing the Standard Poodle as a parent breed is its high level of intelligence. In fact, many breeders put them as the second most intelligent breed behind collies. This high level of intelligence makes them easy to train. They pick up new commands quickly and retain knowledge. On the flip side, it also means that the Poodle can become bored if not mentally challenged, and boredom tends to lead to destructive and bad behavior. Train your Great Pyrenees when they are a young puppy to avoid this.

3. The Original Great Pyrenees Is One of The Oldest Breeds

Although the modern standard for the Great Pyrenees was introduced only a few hundred years ago, the breed dates back much further. Experts believe that the breed was taken to the Pyrenean mountains in 3,000 B.C. and likely originate from the mountain dogs of Asia Minor. Despite the age of the parent breeds, however, the Pyredoodle itself has only been around for approximately 40 years and, as a designer breed, is not recognized by most kennel clubs and owner groups.

Temperament & Intelligence of the Pyredoodle

Thanks to the Standard Poodle heritage, the Pyredoodle is an extremely intelligent dog. They are also eager to please their owners and tend to be happy dogs. This combination means they are easy to train, and if you start training at a young age, you will benefit from a well-rounded, well-behaved, and sociable family dog that gets along with everybody and everything.

Training a young puppy is always easier than training an adult dog. Puppies have not yet picked up on bad habits that need to be altered, which means that you are effectively working with a blank slate. However, the intelligence of the Pyredoodle means that it is still possible to train an older dog to behave the way you want.

The Pyredoodle can be shy and withdrawn, and this is another reason that early socialization is important. It will help give your puppy confidence. This is not only important if you want to encourage your Doodle to guard your family and home, but is important because a confident dog is easier to train, gets along better with people and other animals, and gives you confidence when walking him.

Pyredoodles make excellent family pets, even for those with young children. They are gentle giants which means that while your Pyredoodle might grow up to weigh 100 pounds or more, he will be understanding and gentle with younger children. He will also love attention and enjoy playing with older children.

Similarly, the Pyredoodle will get along with most other animals, especially if you socialize him from a young age. Socialization can be achieved by taking your dog to puppy classes, where he will be taught some basic skills and will mix with other puppies. One of the benefits of puppy classes is that you are surrounded by dogs and dog owners in the same boat as you. They will be more understanding of a boisterous puppy than the owners you meet in the park. With that said, walking your Pyredoodle, on a leash, in the dog park will also help with socialization because it introduces him to new surroundings and teaches him that not everybody wants to say hello.

If you want your Pyredoodle to mix with cats, you should consider introducing them while he is still a puppy. He will learn that they are not for chasing, as the cat will help teach good manners when meeting feline friends.

Things to Know When Owning a Pyredoodle:

The Pyredoodle makes a great family pet, has plenty of energy so will play all day, and he will love to cuddle up on the sofa at night if he’s allowed. Before you buy a Pyredoodle puppy, though, there are some facts you need to know.

The Pyredoodle is a big dog breed, and yours will have a fairly substantial dietary demand. Expect to feed an adult approximately three cups of food a day, costing approximately $50 per month.

As with any puppy, a young Pyredoodle will benefit from a protein-rich food because this supports muscle growth to ensure that your dog grows up physically healthy and strong.

Pyredoodles do not have any specific dietary requirements and a good quality dry food will provide the vitamins, nutrients, protein, and calories that they require.

The Pyredoodle is a big, active dog, and he will require regular exercise. Ideally, his exercise will come from daily walks as well as time in the yard. Although the Pyredoodle will adapt to life in an apartment, he much prefers having outdoor space in which he can run around without the danger of running into tables, chairs, and people.

Your dog will need approximately an hour of exercise a day, and this can come in the form of playing in the yard or walking in the park.

If you allow your Pyre to stay indoors, and he doesn’t get enough exercise, he will quickly pack on the pounds, and it can be very difficult to shift excess weight from a dog of this natural size.

The Pyredoodle is considered easy to train but they can be stubborn and headstrong. As such, you will need to show dominance, without being physical, and you need to maintain and sustain a consistent training schedule to enjoy the best results. The Pyredoodle’s intelligence means that a poorly trained dog, or one with no mental stimulation, can become bored. A bored dog is more likely to exhibit destructive behavior, so the importance of effective training should not be overlooked.

Breeders initially chose the Standard Poodle parent breed because of its shedding characteristics. The Standard barely sheds, if at all, and this has been passed on to the Pyredoodle, although the level of shedding shown by your dog will be dependent on which parent breed is dominant. The lack of shedding makes the Pyredoodle a good choice for asthmatics and those that suffer from allergies. However, it also means that your dog will need regular grooming to prevent the matting of fur and to keep them comfortable. Short-haired Pyredoodles will require brushing once a week, while those with longer hair might need brushing every day.

You should avoid bathing your dog, except when it is absolutely necessary. Excessive bathing removes the natural oils in the dog’s fur.

Your Pyredoodle will also need their teeth brushed regularly. As a minimum, you should brush your dog’s teeth two or three times a week, ideally every day if they allow it without becoming too stressed.

Nails will also need regular cutting. This can be done every two or three weeks, or wait until you hear them clicking on the hard floor. Dogs that exercise on abrasive surfaces like concrete tend to wear their nails down naturally over time, but if your Pyredoodle only walks on grass and earth, they will need more routine cutting.

The Pyredoodle is considered a healthy dog. There are few known common conditions with this specific breed, but as a crossbreed, he could suffer the congenital complaints of his parent breeds.

Both breeds are prone to hip dysplasia. It is also recommended that Great Pyrenees be tested for thyroid, hearing, eye complaints and bleeding disorders, while the Standard Poodle should be tested for Eye, thyroid, and skin complaints.

The Pyredoodle is bred from two intelligent, large, energetic dogs. The result is a dog that will enjoy his exercise, love playing with the children, and will get along with all family members regardless of how many legs they have. They do require socialization to ensure that they are confident and happy, and early training is especially important in dogs of this size. The Pyredoodle can grow to 100 pounds as an adult dog, which means that any destructive tendencies will really come home to roost.

A generally healthy and hardy dog, the Pyredoodle can adapt to most situations and he will even adapt to living in an apartment. Generally, however, he will prefer a home with a yard area so that he can get out and play even when it isn’t time for a walk.

Perhaps the biggest obstacle to owning a Pyredoodle is the maintenance and grooming required. The Great Pyrenees is known for two extensive bouts of shedding a year, known as great snowstorms. If your puppy inherits his fur from the Great Pyrenees, he will need daily brushing. While the wire-haired Standard Poodle doesn’t shed as often, it also needs regular brushing to avoid matted and tangled hair.