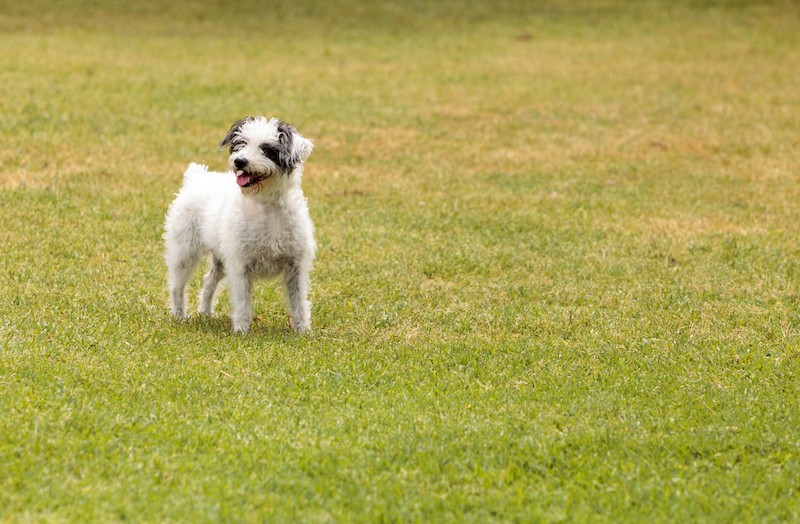 The combination of the Rat Terrier and Bichon Frise is an interesting one. The two breeds share many characteristics of high energy and curiosity that defines pups of these types. Both were hunters that protected their homes from rodents. Each one goes back hundreds of years with equally obscured histories. Then, their respective pasts diverge.

The Rat Terrier has remained a working dog, with a diverse range of roles, from therapy dog to police service. The Bichon Frise, on the other hand, has transitioned from the farm to the palace. This pup rubbed elbows—or paws—with the likes of Henry III and artist, Francisco Goya. The cute face and friendly nature of this pup make him a natural on these fronts.

The American Canine Hybrid Club recognizes this mix, although the date of its origin is uncertain. The Rashon has a lot to offer for anyone looking for a small dog that will make your life fulfilling with the addition of a pet. His small size makes him an excellent choice, whether you live in the country or city. The pup has his quirks, but he is a welcome addition to any home that can give him the love he needs.

Rashon Puppies – Before You Get One

It’s essential to learn the good, bad, and ugly about any pup you’re considering. Enthusiasts selectively bred dogs for many traits that can put this pooch squarely in the dealbreaker or dealmaker category. That’s a vital task for anyone considering bringing a pet into their home, whether it’s a dog or a hamster. They involve a commitment in time and money that you need to understand upfront.

The Rashon is a high-energy pup. He craves activity and mental stimulation to stay happy and fit. That means he’s not a dog to put in a crate all day while you work. He wants your companionship and may develop bad habits if he feels neglected. It’s helpful to look into the history of a breed to get an idea of what you can expect.

While the Bichon isn’t too vocal, the Rat Terrier makes his presence known. Both breeds have a moderate tendency to nip, which is something you’ll need to correct early. As you may expect with a hunting dog, this pup has a keen prey drive and equally high wanderlust potential. You should exercise caution when letting him off-leash.

The AKC officially recognized the Bichon Frise in 1972. However, he made his mark in the show ring in 1971. He did so well that the organization fast-tracked his admission into their ranks.

2. The family tree of the Rat Terrier includes some unexpected members.

The Rat Terrier is the culmination of selective breedings of several dogs, a few that may make you scratch your head. The connection with the Manchester Terrier seems obvious, but how about the Greyhound or Mastiff? Believe it or not, it’s true.

3. The Bichon Frise has his sea legs.

The history of the Bichon Frise begins in the Mediterranean. It wasn’t long before he captured the hearts of sailors and made his way to Italy, Spain, and other parts of the world. So revered was this pup that travelers traded dogs.

Temperament & Intelligence of the Rashon 🧠

The Rashon is an intelligent dog, which isn’t surprising given his parent breeds. Both were ratters and had to stay alert to do their job well. It’s easy to understand other traits of this pup when you consider his history. He’s very adaptable and will take to city life or in a home in the country. To say that this pooch is a people dog is an understatement. He adores being around his human companions.

Both parent breeds are curious dogs, which makes sense given their background. However, that also means that the Rashon needs mental stimulation as well as regular exercise. His curiosity could get him into trouble if he gets bored. Keeping him occupied with attention or toys is one of the best ways to prevent bad habits.

The Rashon is an excellent choice for a family pet. He will lavish his affection freely on everyone. He is quite kid-friendly and will keep up with them with his seemingly boundless energy. He is somewhat reserved with strangers until he gets to know them. This pup will make a reliable watchdog. However, it’s essential to keep his barking under control.

The Rashon will do well with other pets, provided you socialize him early. We recommend enrolling him in puppy playtime sessions so that he can meet other dogs and people. Both parent breeds have a strong prey drive, which may raise its ugly head if the family cat runs from him. The Rat Terrier in him also has a high wanderlust potential if he takes up the chase.

Things to Know When Owning a Rashon:

Adaptability is the Rashon’s strong suit. He’s not very fussy as long as he gets enough attention. He is prone to separation anxiety if he’s left alone too much. He’ll do best in a home where there’s always activity and someone with whom he can play fetch or cuddle on the couch. The Rashon is relatively long-lived, provided he gets a high-quality diet and regular veterinary care.

When owning a Rashon or similar size dog, the essential thing to remember is that they must eat at every meal. These pups mature rapidly and need adequate nutritional support. The other concern is hypoglycemia or low blood sugar. Toy breed puppies are especially vulnerable because of their growth rate and development. There’s also the stress of going to a new home.

The best way to monitor his eating is to encourage him to eat as soon as you put his bowl on the floor. Don’t free-feed him dry kibble. We suggest offering him three or four meals a day as a puppy. Once he’s an adult, you can scale back to two times a day. That will ensure that his blood sugar levels stay stable throughout the day.

The Rashon is a spitfire. He has lots of energy and is always ready for a game of fetch. We suggest regular walks so that he can practice his leash manners and social skills. The Rat Terrier in him doesn’t tolerate the cold well. A coat or jacket will keep him comfortable on his strolls through the neighborhood. As long as you socialize him properly, you can take him to the doggie park to work off some energy.

Because of his small size, we recommend that you supervise his time with other pets. The Rashon sometimes forgets that he’s not a large dog because of the Terrier in him. The same caution applies to playtime with the kids. You should teach small children to play gently with this pup.

This pup’s intelligence will make training easy for you. He is eager to please as long as you give him clear directions and are consistent with his lessons. Positive reinforcement is the best way to teach the Rashon. He is sensitive to harsh reprimands because he only wants to make you happy. We suggest using treats as training aids to make learning more enjoyable for him.

The Rat Terrier in him took on many different jobs on the farms on which he was raised. That background gives the Rashon good problem-solving skills. Don’t be afraid to challenge him with new tricks. This pup is smarter than you may think.

Whether your Rashon sheds depends on which parent breed is dominant. The Bichon is on the low end of the spectrum, whereas the Rat Terrier is seasonal. The thickness of his coat will determine how much brushing you’ll need to do and what to use. A curry brush or hound glove will work well for the Rat Terrier in him. Opt for a slicker brush for the Bichon.

You should check your pup’s ears occasionally. Plucking excess hair will ensure adequate circulation to prevent infections. The same recommendation applies to his toenails, especially if you don’t walk him a lot on the pavement. Get him used to having his ears and paws handled as a puppy to make the task easier for you.

Both parent breeds bring several health issues to the table. A reputable seller will conduct the pre-breeding health checks to lower the risk of these conditions. Nevertheless, routine vet care is imperative for the Rashon or any pet. Some of these problems only show up in older dogs, making regular visits a must.

The size difference between male and female Rashons isn’t significant. Choosing one sex over another is often a preference since either one will make a delightful pet. We suggest discussing spaying or neutering your pup with your vet, especially in light of the possible health concerns of the parent breeds. Bear in mind that your dog’s risk of obesity will increase due to changes in metabolism.

The Rashon is an adorable pup. He is so lovable and enjoyable as a pet. He doesn’t have a lot of the glaring issues that make pet ownership tiresome. He rolls with the punches and makes your life easier with this pup in your life. The cost of getting one is affordable. The other expenses of ownership are par for the course. He’ll make a delightful addition to your home for many years to come.