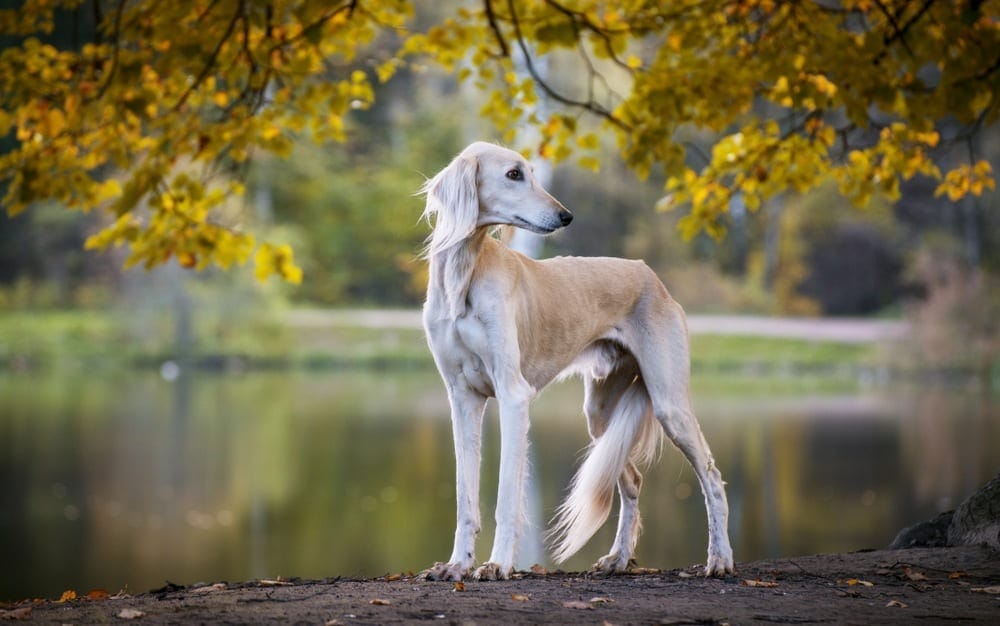 Swift as the wind and supermodel-skinny, the Saluki is one of the oldest breeds of dogs available to today’s pet shoppers. A truly graceful canine, the Saluki was utilized by royalty for thousands of years to hunt gazelle.

Today, the Saluki is a sleek, stunning, and truly special dog that would make a great addition to your family. They’re not for everybody, though, as they’re fairly aloof and can be high maintenance.

If you’re thinking about bringing a Saluki into your home, be sure to read this complete guide on this special pooch. Here, you will find information on where to buy a Saluki puppy, this dog’s temperament and intelligence, and everything your new pet requires of you in order to live a happy and healthy life.

Saluki Puppies – Before You Welcome One Into Your Family

Are you in the market for a Saluki puppy? This extremely affectionate dog would make an amazing addition to almost any household. However, before you purchase a puppy from the very first internet ad you see, it’s important to be aware of backyard breeders and puppy mills.

These smaller dog breeding operations are usually overseen by an amateur who is out for monetary gain and who puts little efforts toward a selective, ethical breeding process.

Many first-time puppy buyers may be tempted by the low prices of a puppy mill or backyard breeder. However, the negative consequences of buying a Saluki puppy from one of these low-quality facilities often greatly outweigh the perks.

Before you decide to buy a Saluki puppy, it’s imperative to ensure that you’re getting one from a high-quality, reputable, and responsible dog breeder. Some characteristics of a good Saluki breeder include:

Be sure that the breeder you are doing business with portrays the aforementioned traits. You want to ensure that you are buying a happy and healthy Saluki puppy from a reputable breeder in order to avoid health or behavioral issues later on down the road.

3 Little-Known Facts About the Saluki

Arab tribesmen were such big fans of Salukis that they considered them a gift from Allah. They were referred to as “el hor,” which means “noble.”

The reason why they were so highly valued is because they’re excellent hunting dogs. The tribesmen considered them as valuable as their horses, which is high praise indeed.

They were also considered the royal dog of ancient Egypt, and were often buried with pharaohs. We’re sure they preferred the company of the tribesmen as a result.

2. They’re Members of the Hound Family

Salukis are actually sighthounds; that means they use their eyes instead of their noses to hunt down their prey. This combination of keen eyesight and an ability to run for days makes them formidable hunters indeed.

Of course, they don’t hunt much anymore, and that stamina can work against you when it’s time to tucker them out.

The existence of the Saluki breed can be traced back over 5,000 years to the ancient Middle East. Images bearing their likeness have been found on tomb paintings and mosaic sculptures.

That doesn’t necessarily make them better than a newer breed, but it is a fun fact you can amaze your friends with when they ask why you adopted a Saluki.

Temperament & Intelligence of the Saluki 🧠

Aloof around strangers, the Saluki are gentle and devoted companions once they warm up to you. They have a tendency to develop a deep connection with one member of the household, which may lead to separation anxiety if the dog is left alone for extended periods of time.

If not socialized from the get-go, your Saluki can be shy and reserved around strangers. This is why it’s critical to expose them to as many new faces as possible when they’re still young.

They’re often calm and reserved, making them excellent pets for apartment dwellers. However, if they get bored, they’ll destroy your house, so it’s important to provide them with lots of toys, attention, and other stimulation.

Salukis are very intelligent. However, training one can be difficult as they tend to think for themselves and be extremely independent.

If they find something or someone to be more intriguing than you, they’ll definitely ignore you.  This can be especially problematic given their sharp eyesight, as any movement on the horizon will catch their attention. As a result, you may have more luck training them indoors.

Salukis aren’t terribly aggressive, so you shouldn’t have much to worry about in that regard. However, they’re not very outgoing, either, and they may not be interested in playing with your kids.

They do get away with older kids, provided the children know how to play with them. Little ones should be kept away, as Salukis have little patience for all the pulling, poking, and prodding that a toddler is likely to subject them to.

Also, once they decide to start running, it’s very easy for them to bowl over a small child. They have knobby bones that can do some damage as well.

They’re generally wary of strangers, so they’re not a good pet for families that do a lot of entertaining.

Since these dogs are so emotionally needy, having other family members around to provide them with attention can help stave off separation anxiety. It’s also helpful to have spare hands around to help with tuckering them out.

Salukis generally tolerate other dogs well. However, this isn’t the type of dog that constantly wants to play, although they will appreciate a partner in crime when they decide it’s time to sprint for no reason.

Cats and smaller animals are generally a bad idea. Remember, Salukis were bred to hunt animals like this, and you can’t just turn off 5,000 years of genetic programming.

That being said, you may have some luck getting them to tolerate other pets if you start socializing them while they’re young. We wouldn’t recommend bringing a mature Saluki into a household with cats and gerbils, though.

Things to Know When Owning a Saluki

Now that you understand a little more about a Saluki’s disposition and intelligence, let’s explore everything that they need to live their best life.

Salukis can be extremely persnickety eaters that will turn up their noses at whatever is offered to them. As a result, you may be tempted to feed them any food they’ll eat, rather than insisting on a high-quality kibble.

We recommend a food that’s high in protein and uses quality ingredients, with no fillers or additives. This is one of the rare breeds that can be allowed to free-feed, as they’re unlikely to overeat, but we recommend feeding them at set times regardless.

They are a sleek and slender breed, and it’s perfectly natural to just barely notice the outline of their ribs under their coats. Don’t panic if people accuse your dog of being too thin; as long as your vet says your pet is healthy, you have nothing to worry about.

They’re not prone to joint problems — in fact, they have the lowest incidence of hip dysplasia of any breed. That means you can probably save money on supplements. That advice goes out the window if you manage to make your Saluki obese, though.

Salukis are typically calm dogs — until they decide they need to run, that is.

When the urge to sprint takes over, they’ll need a lot of room to do so. They can cover great distances with ease, and they’re capable of reaching speeds of 40 mph. A big yard is nice to have, but make sure you have tall fences, because they can jump extremely high.

A better idea might be taking them to a dog park; it’s one of the few places where you’ll have enough space to let them run. Don’t let them off-leash anywhere that isn’t fenced, though, as they may not come back.

If you don’t give your Saluki enough exercise, they may feel the need to become destructive. You may find it easier to tax their minds than their bodies, though, so puzzle toys, obedience training, and similar activities are a good idea.

Salukis are a super-smart breed and will pick up on the basics rather quickly. However, due to their independent nature, your Saluki can be a challenge to train.

They’re prone to boredom and can get distracted easily. Keep things fun and interesting by using short, engaging training sessions with positive reinforcement.

Don’t make your life more difficult than it needs to be by training them in a busy environment. If there’s something out there that can catch their eye, they’ll most likely stop paying attention to you — and it’s surprisingly difficult to be more entertaining than a squirrel.

All of this makes them a poor choice for the first-time dog owner. If you don’t have plenty of confidence and patience, you’ll likely have a rough go of it, so you may be better off learning the ropes with a less-challenging breed.

Salukis have a short, silky coat, and they don’t shed much. They only need to be brushed once a week or so, although you may want to do it daily if you’re fastidious about dog hair.

Don’t neglect the brushing, either. It prevents their coats from getting tangled or matted, and it redistributes natural oils around their skin, reducing the need for bathing.

Their teeth should be brushed regularly and their ears cleaned weekly to prevent infection. Their nails should be trimmed as needed, but if they run as much as they’d like, they’ll likely file their nails down naturally.

Salukis are generally a very healthy breed, although they do have their fair share of issues. Some of the biggest problems to be aware of include:

While male Salukis tend to be larger than their female counterparts, there are no huge personality trait differences between the two genders.

If you’re seeking a devoted dog that will always be happy to accompany you on your morning jogs, the Saluki could be the perfect breed for you.

They’re not as playful and outgoing as your typical dog, though. The Saluki needs to be socialized from an early age in order to get along with strangers, and they need a big backyard that is properly enclosed. They will also do best in a home with older children, or none at all.

As long as you’re not expecting a slobbering lovebug, the Saluki can make a wonderful companion for you and your family. Just don’t challenge them to a footrace.

Australian Shepherd vs Labrador: How Are They Different?