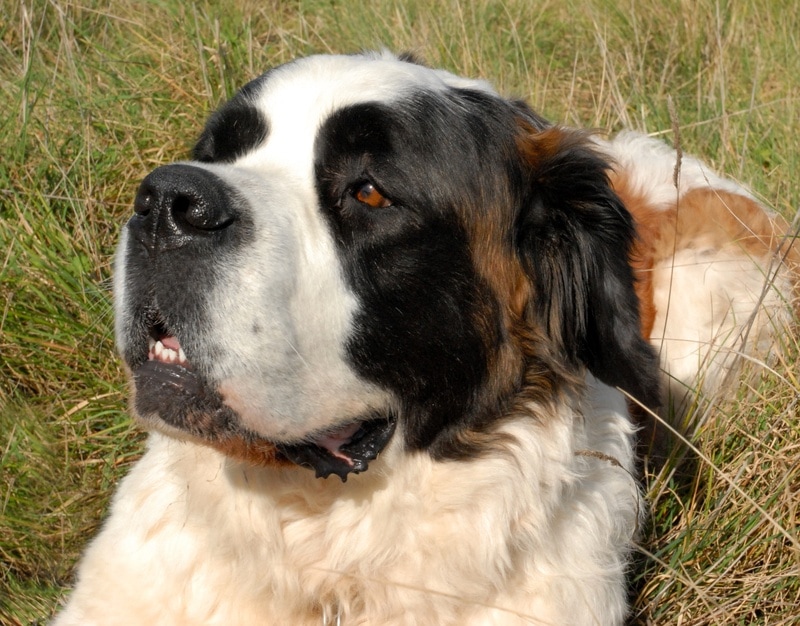 With a personality as large as their oversized bodies, the Saint Bermastiff — also known as the Saint Mastiff — is one of the biggest designer dog breeds yet developed. A mix of the Saint Bernard and Mastiff breeds, these gentle giants seem to march to the beat of their own drums. At times lazy, and at times intensely curious, you can always know one thing about the Saint Bermastiff: they’ll love trying to get onto your lap no matter how big they get.

Have you been considering buying or adopting a Saint Bermastiff? Or are you simply curious about this plus-sized designer dog breed? Either way, this guide will introduce you to one of our favorite hybrid dog breeds. Covering everything from how to buy a Saint Bermastiff puppy, to their trainability, personalities, and health requirements, you’re sure to learn a thing or two about this lovable dog.

Saint Bermastiff Puppies – Before You Get One…

Saint Bernards hail from the Western Alps of Italy and Switzerland. Hardy mountain dogs, they were originally bred as search and rescue dogs by a hospice on the Swiss-Italian border. Named after Bernard of Menthon, an Italian monk, the first Saint Bernard dogs were bred in the late 1600s. They are giant dogs, capable of weighing up to an astonishing 260 pounds.

Almost as large as the Saint Bernard, the Mastiff has an incredibly long history in dog breeding. Records in Europe and Asia dating as far back as 3,000 years ago show evidence of Mastiff-type dogs, making them one of the oldest guard dogs in recorded history. The generic term “Mastiff” refers, in fact, to a whole group of dogs that share the common traits of large, muscular bodies and bulky, short-muzzled heads.

1. Saint Bermastiffs Have a Keen Sense of Smell

Uncommon in large dogs, Saint Bermastiffs boast a sense of smell that’s nearly as good as many hunting dogs. This is due to both sides of their genetic heritage: The Saint Bernard used its sense of smell to track down lost hikers in the Alps, while the Mastiff employed its scent sensitivity as a guard dog.

2. They are Perfectly Suited to Cold Climates

Most of a Saint Bermastiff’s bulky anatomy is specially designed to withstand the cold — from their extra fat stores, to double-thick paw pads, to their dense coats. Many dogs of this breed will find it extremely difficult to acclimate to warmer weather and are better kept as pets in cooler climates.

3. Their Ancestors’ Barrel Collars are Likely Just a Myth

The brandy barrels so often shown around the necks of Saint Bernards seem to have no basis in fact. Instead, they may be attributed to a cartoon published in England around 1820.

Temperament & Intelligence of the Saint Bermastiff 🧠

In spite of their somewhat oafish appearances, Saint Bermastiffs are highly intelligent dogs that take easily to learning new commands and tricks. Their crossbreeding makes them particularly prone to bouts of laziness, but with just a little bit of socializing as puppies, most Saint Mastiffs are happy to socialize at a moment’s notice. Good owners for this breed include people who appreciate more laid-back, easygoing pets that don’t demand as much of their attention.

The Saint Bermastiff is almost ideally suited for inclusion with a family, as their gentle and loving natures make them happy to spend time with people of all ages. Due to their size, however, you should of course exercise extra caution when they are around small children. While they would never hurt a child on purpose, it’s not uncommon for them to accidentally knock things (and people) over as they lumber about.

If socialized from a young age, the Saint Bermastiff will gladly spend time with other dogs and even small animals. Because of their oversized builds, though, it’s not wise to let them roam freely in the same area as small dogs, cats, or rabbits; a single misplaced paw could be cause for serious injury in smaller pets.

Things to Know When Owning a Saint Bermastiff:

Buying or adopting a dog is not just a matter of monetary cost, but of your investment of time, love, and energy as well. Before you make a decision about whether the Saint Bermastiff is right for you and your family, consider the following topics:

With their giant size, Saint Bermastiffs require a significantly larger portion of food than many other dog breeds. Easily capable of eating 4-6 cups of dog food per day, the cost of feeding a Saint Mastiff can quickly become prohibitive. Expect to budget up to $100 per month to keep them well-fed.

The Saint Bermastiff does not require the constant activity of smaller dog breeds, but this does not mean that they don’t need regular exercise. Rather, you’ll need to provide them with 30-60 minutes of more intense exercise per day. This can include runs, fetch, and games — though you shouldn’t expect to beat them at a game of tug of war!

Most Saint Bermastiffs display a roughly even blend of Saint Bernard and Mastiff coat styles, meaning that you’ll brush them anywhere from one to three times per week. During their heaviest shedding season in the spring, you’ll need to increase this brushing routine to once per day to keep their hair under control.

While they are a rather robust and healthy breed, some Saint Bermastiffs develop the following conditions based on their genetic predisposition:

Saint Bermastiffs of both sexes display nearly identical characteristics, including their overall size and weight. If you’re looking for a specific temperament of dog to keep as a pet, it’s best to consider individual personalities for Saint Mastiffs rather than pick based on their sex.

Large and lovable, the Saint Bermastiff is a laid-back dog that can fit amazingly into many homes. Because the Saint Bermastiff requires less constant attention than many smaller dogs, older and busier owners will find them to be a constant yet undemanding companion. As long as you have the budget for their high grocery bills, you and your Saint Bermastiff will get along just fine.