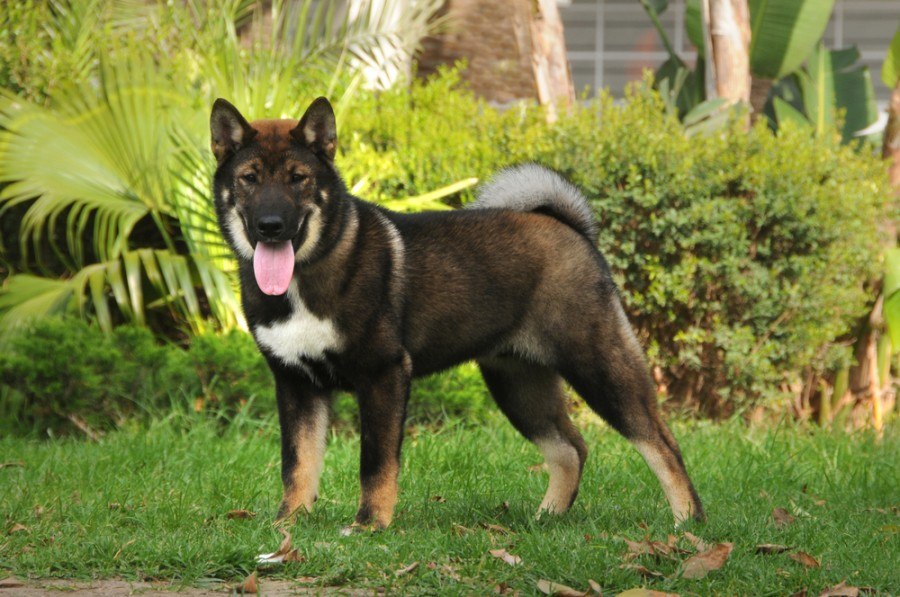 Are you tired of yappy lapdogs, and clumsy giants that just want to slobber all over everyone’s face? Then you just might love the perceptive and unflappable Shikoku!

Where some canines will beg for belly rubs from just about anyone, the Shikoku is a far more dignified breed. They are cautious and selective when socializing, but once they deem you a friend, they are some of the bravest and most loyal of companions.

They make wonderful pets for active owners, and if raised well, can make loving and protective family dogs.

Shikoku dogs are relatively new to the rest of the world but are actually an ancient breed.

One of only six dog breeds native to Japan, the Shikoku has been working with humans for centuries. They were developed on the island of Shikoku, in the Kochi Prefecture mainly as boar and deer hunters in the mountains.

There are three varieties types of Shikoku, named for where they were bred in Kochi: Awa, Hata, and Hongawa. These regions are rugged and mountainous, and for a long time were not easily accessible to visitors, which meant that the Shikoku bloodline stayed incredibly pure until the mid-1900s.

The isolation of their island of origin makes the Shikoku a very rare breed, and it was not introduced to other countries until the 1960s and 1970s. In fact, these dogs were not even recognized by the American Kennel Club until 2014!

Today they are mainly kept as companions and watchdogs, though some are still used for their original purpose of hunting in the Shikoku mountains.

Shikoku Puppies – Before You Welcome One Into Your Family

Shikoku puppies have cheerful faces, jauntily curled tails, and a thoughtful attitude. They can be enthusiastic and rambunctious but often take a little time to get to know strangers. If you let a Shikoku pup get to know and like you, however, you will have a loyal pal for years to come.

Most Shikoku live into their teens, so don’t rush into the decision to get a new puppy. You must be prepared to care for one of these bright, perceptive dogs in sickness and in health for the rest of their life!

As a hard to find breed, you will probably want to get in touch with some breeders. To get an idea of which breeders may be trustworthy, check out the North American Shikoku Club.

The Shikoku dog nearly disappeared when Japan was struck by severe economic hardship in 1926. Owning a dog had become a luxury, and as breeding programs dwindled, so did the breed’s numbers.

However, this hardship and near extinction spurred the creation of the NIPPO  group (Nihon Ken Hozonkai) in 1928 which set out to identify, protect, and preserve the native Japanese dog breeds. They reinvigorated the Shikoku breed in 1937, and this was when the three varieties were named.

2. The Shikoku is Rarely Seen Outside of Japan

One of the few dog breeds native to Japan, the Shikoku is seen outside of the country very rarely. There are extremely few of these dogs in the world, owing to their remote and very specific location of origin.

The breed is so symbolic of the country that in 1937 the emperor named it a living “natural monument” of Japan.

3. There is Some Debate About the Classification of the Shikoku

Kennel clubs cannot seem to agree on how to classify the confident, perky Shikoku. The Canadian Kennel Club puts the Shikoku in the hound group, but the United Kennel Club classifies them as working dogs.

The American Kennel Club only just recently recognized the breed, and has the breed still pending classification under the “Foundation Stock Service” label.

Temperament & Intelligence of the Shikoku 🧠

The Shikoku is a tough, agile dog that loves sprinting after game in the mountains and is even-tempered and quiet in the home. They are extremely loyal to their owners and family but require a degree of earned respect before they count someone as a friend.

Though loving and playful with family, the Shikoku also is wary of strangers and selective about whom they decide to befriend. A well-socialized Shikoku is polite with strangers, but if they are assessed and do not meet this dog’s high standards, they will often be ignored entirely.

This perceptive dog is also smart and a fast learner. They will flourish with plenty of outdoor exercise, stimulating activities, and firm, but gentle leadership from their family.

The Shikoku is extremely loyal to their family or owner. However, they need a firm family structure and early socialization to prevent aggressive habits from forming.

This dog will do well with older children, and children it has been raised with and developed a relationship with.  But younger children and kids that don’t understand how to respect their canine friend’s boundaries should not have unsupervised playtime with the Shikoku.

While it is entirely possible to socialize your Shikoku with other pets, their hunting heritage means that they can become aggressive and domineering with other animals. This dog will need to be raised with other animals and trained to interact with them appropriately.

Though many Shikoku are good-natured with other dogs and cats, it is inadvisable to allow this vigilant hunter to interact with any small pets or prey animals without strict supervision.

Things to Know When Owning a Shikoku

Caring for a dog is a big responsibility. So, for your consideration, we’ve laid out some essential routines and information about how to keep your Shikoku healthy and happy.

Like humans, dogs are omnivores that need nutrients from a diverse spread of foods. And often a high-quality kibble is one of the best and most convenient ways to feed your pooch a well-balanced diet.

One sure sign of quality in a dog food brand is the use of superior ingredients. Look for nutrient-dense whole foods like lean proteins, veggies, and fruits. If you see lots of wheat, corn, and byproduct ingredients on the label, run the other way!

The energetic Shikoku will especially benefit from lots of healthy proteins and fats. Fatty acids like omega-3s and 6s support joint function and brain development. And proteins like fish, fowl, and eggs are an excellent resource for building strong muscles.

The compactly-sized Shikoku is an exceedingly athletic dog. Bred for agility and stamina while hunting in their mountainous homeland, this dog needs multiple exercise opportunities each day to work off their energy.

Your dog will also need regular active time with you and the family. A Shikoku and will love getting to go for long hikes, bike rides, and enjoy a plethora of games.

The Shikoku will also appreciate running and exploring by themselves equally to activities with their family, so we recommend a living situation with a fenced-in yard for your pup to play in.

A cooped up or under-stimulated Shikoku will likely become bored. And, as with many other smart breeds, boredom soon leads to bad behavior. Toys and doggie puzzles are one way to stimulate this sharp-minded dog mentally and physically.

The surest way to care for your Shikoku’s mental health is to provide structure in the form of training. As hardworking hunters, these dogs crave guidance from their owners and may act out if they are not taught their place in the family hierarchy.

That being said, the Shikoku is an exceptionally eager and easy-to-train dog. Though somewhat independent, they are not stubborn like some of their Japanese cousin breeds. Firm, positive training is recommended as the Shikoku is a sensitive dog that learns quickly when treated with respect.

The Shikoku has a thick, dense double coat that sheds a little throughout the year but heavily during one or two shedding seasons. You can keep your pup’s coat healthy and well-groomed by brushing them once a week. Their coats dry super slowly, so reserve baths for truly messy, muddy days!

You should also routinely check your dog’s toenails, teeth, and ears. The active Shikoku will probably grind down their nails naturally, but you might need to trim them occasionally as well.

Brush your dog’s teeth at least once a week to support healthy gums. And wipe those perky ears clean of wax and dirt regularly to thwart infections and parasites.

All of these grooming routines should be started early in your pup’s life so that they become used to being handled and cared for. If you keep up a consistent care regimen, then they will be far more likely to allow you to tend to wounds and injuries should they occur.

Owing partially to careful breed cultivation, and partially to general hardiness, the Shikoku is generally a healthy dog.

Nevertheless, there are still several inheritable issues to be aware of in terms of your Shikoku’s health.

There are few differences in Shikoku dogs based on sex, and personality is always a case by case basis. While this may be true, you can generally count on the females being smaller and somewhat more docile. And males are usually larger and more prone to behaviors like marking territory with urine and mounting or humping.

So, is the Shikoku the right dog breed for you?

If you have a sedentary lifestyle, or simply do not have any interest in learning how to train and create structure for a strong, intelligent dog, then perhaps not.

On the other hand, if you are an outdoorsy and active individual who is seeking an energetic but thoughtful dog to adventure with, then look no further!