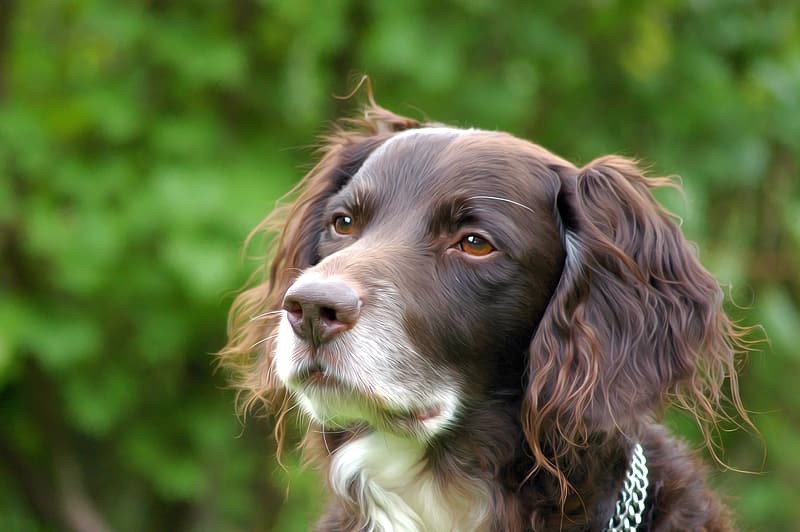 They’re a super loving breed that’ll make a welcome addition to any family with an active, outdoorsy lifestyle. This pup can be your best companion on a long hunting trip or hike through the woods. Or if you’re looking for a pup to roam your lands and look after your stock, the Springer Spaniel Sheepdog will happily spend all day outside working.

But they’ll be just as excited to go from sheepdog to lapdog when the day is through. The Springer Spaniel Sheepdog is as loyal and loving as they come and make for great watchdogs for the ones they love. This also extends out to the children in their family. Their protectiveness and patience make them great playmates even for smaller children.

Before you go rushing out to find your new Springer Spaniel Sheepdog puppy, there are a few things you need to take into consideration.

First, are you going to be able to provide adequate exercise and space for your new pup? Springer Spaniel Sheepdogs can’t thrive in a small, inactive environment. These dogs were born to run and go on adventures—not spend all day watching daytime TV. If you have to leave them home alone in an apartment all day, they may grow very bored and become destructive. Also, if you can’t let them free run, do you have the time to provide them with 2 hours of exercise every single day? If not, you might not want to get a Springer Spaniel Sheepdog.

Next, do you live in a noise restrictive area? This is important because members of this breed are notorious barkers. They just love to let you know what’s going on. And they’ll do so with a loud, piercing bark. Again, this doesn’t make them an ideal apartment or inner-city dog.

And lastly, do you have a firm, but gentle hand and patience when it comes to training dogs? The Springer Spaniel Sheepdog can be relatively difficult to train due to an independence streak they tend to exhibit.

But if you can handle all of these requirements, your new Springer Spaniel will be thrilled!

Fortunately, Springer Spaniel puppies are relatively low cost when compared to the price of similar breed puppies. And for about $500 you can find one from a reputable dealer. If you take the adoption route, you’re sure to find a puppy or older dog for much cheaper.

However, like with most dog purchases, the upfront cost is normally the cheapest. The biggest expense when it comes to the Springer Spaniel Sheepdog is the food and medical bills. These are not a small breed and will go through food rather quickly. And due to their active lifestyle, they’ll need highly nutritious and protein-packed formulas that often come at a premium price.

And health-wise, they’re not the most robust of breeds. This could mean more frequent trips to the vet and a running tally of medical bills.

1. They’re a hybrid of the Old English Sheepdog and the English Springer Spaniel.

The Springer Spaniel Sheepdog isn’t a pure breed and therefore isn’t recognized by the AKC. The English Springer Spaniel has roots in Spain but found its way to England via merchant ships traveling between the British Isles and Rome. The Old English Sheepdog is a herding dog that originated in the UK as a farming companion that helped their owners run efficient businesses.

2. The Springer Spaniel Sheepdog was first bred during the 2000s.

Although both parents of the Springer Spaniel Sheepdog have been around for hundreds of years, the breed was first intentionally bred in the 2000s in the United States. This makes them relative newcomers to the designer dog scene.

Springer Spaniel Sheepdogs can have blue, hazel, or brown eyes. Or in an uncommon condition known as heterochromia, they have two different colors!

The Springer Spaniel Sheepdog is an extremely well-mannered pup. They love pleasing their masters and seeing them happy. The breed is also exceptionally kind to children and will go out of their way to protect them at all costs. They are often cautious of strangers—yet, not unkind—until after they’ve proven not to be a threat.

Springer Spaniel Sheepdogs are quite brilliant as well. However, this can lead to some issues that very many intelligent dog breeds go through, such as immense boredom or stubbornness.

This is honestly one of the best family dog breeds out there. They are deeply loyal to their families and, given the chance, they would stay by your side forever. And they just adore children. They fashion themselves as protectors and nannies looking over little ones with a watchful eye and endearing patience.

The Springer Spaniel Sheepdog also gets along with other pets. However, early socialization is recommended. This will help them to improve their relationships as they get older and become more tolerant of other animals and pets around them.

Things to Know When Owning a Springer Spaniel Sheepdog:

These pups are super active and require highly nutritious food to ensure they receive all the energy they need to make it through the day. We recommend Taste of the Wild High Prairie Grain-Free Dry Dog Food. It’s a high-protein food source (32% protein content) with six different protein sources to help build lean muscle. It also contains sweet potatoes and potatoes for complex grain-free carbohydrates to build up energy stored.

You’ll probably want to feed your pup 2 to 3 cups of food a day based on their size and amount of energy spent that day.

If you’ve decided to raise a Springer Spaniel Sheepdog, you’ll quickly realize just how important exercise is for them. They have an endless amount of energy and will need plenty of playtimes and daily walking to keep them satisfied. This breed needs an average of 2 hours of exercise per day to keep them in happy spirits—that’s a lot!

However, look on the bright side. At least, they’ll help to keep you in shape too!

However, once you’ve broken through their stubborn barrier and demonstrated who the master is, they’ll happily go along with whatever you have to say.

And you don’t want to bathe them too often. That will begin to break down and destroy their natural oils which help to keep their skin nice and healthy.

Being a mixed breed, the Springer Spaniel Shepherd has inherited diseases and illnesses from both of its parent lineages. Fortunately, they’re mostly minor concerns. But these minor veterinary bills can add up quickly depending on the breadth of their malaise.

There are no real discernable differences between the sexes. The individual characteristics of your Springer Spaniel Sheepdog’s personality will be much more influenced by its particular set of parents than by its sex.

If you’re looking for an excellent family dog for your active lifestyle, perhaps a Springer Spaniel Sheepdog is the right choice for you. They’re a wonderful watchdog and guardian for your family while maintaining the gentleness and patience needed to bear with even the most persistent of children.

Just remember, raising a Springer Spaniel Sheepdog requires a ton of work. They’ll need plenty of daily exercise and activity. And they can be a bit tough to start training. However, once those hurdles are cleared, you find a loving pup and superb addition to your family.

Husky vs. Labrador: Which Dog Should You Choose?