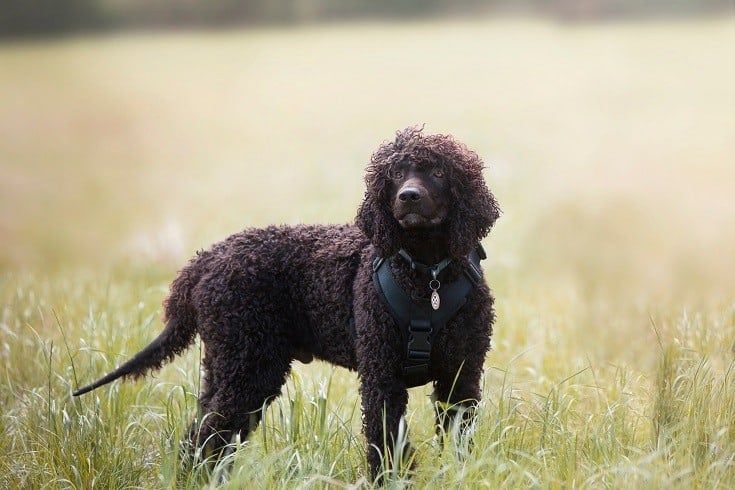 The Irish Water Spaniel is the tallest of the Spaniel breeds, and he shares a lot of the characteristics of other Spaniels. He is lively and energetic, loves the water, and he has boundless energy and will happily walk, run, or swim for hours. He is also known for being a little clownish. However, while this breed is very intelligent, he is also stubborn and headstrong, which means that he has the capability to learn plenty of commands and to adopt good behavior traits, but it can still be a challenge to convince him to do so. Generally, this breed will determine what they think is right and then run with it, and it takes sheer determination of will to change their mind.

The Irish Water Spaniel is considered a good breed for those with allergies. Although he does require a good brushing at least once a week and may require a trim twice a year, he sheds very little. Not only does this mean less clearing up after him, but it reduces the allergens floating around the air that trigger dog allergies in sufferers.

Irish Water Spaniel Puppies – Before You Get One

1. They really do adore the water.

As the name suggests, the Irish Water Spaniel is at home in the water. They were bred as retrievers and were especially popular for retrieving waterfowl. Not only do they have the incredible coat that helps protect them against the cold and wet, but they even have webbed feet to help them wade and swim through water. Even if you don’t intend to use the Water Spaniel for this purpose, you should be prepared to walk a dog that loves to jump in puddles and won’t think twice about running and leaping in a muddy lake, the sea, or any other body of water. It’s best to have a towel to hand. This propensity to jump in water also means that you will have to check your Spaniel over to ensure that he isn’t covered in ticks and other nasties that are found in water. Check his ears regularly, too. They can become infected.

The curly hair and their size mean that the Irish Water Spaniel is often mistaken for the Poodle. They indeed look similar, and both breeds are considered good breeds for people with dog allergies. However, despite their similarities, they are quite different. The Water Spaniel is more of a clown than the Poodle, and while you might consider cutting the Poodle’s hair right back, you should avoid doing this to the Spaniel. Their coat will require a good brushing every week, however.

The Water Spaniel has boundless energy. He will forage, chase, run, and swim for hours on end, seemingly without tiring. If he isn’t used as a working dog, then you will need to find other ways to meet their high energy demands. Dog agility is a good idea because this will test them mentally as well as physically, although you can also find dog sports that involve water. Dock jumping and water retrieval are some of the activities dedicated to this type of breed. Alternatively, you can use this as an opportunity to take up canoeing or boating: your Spaniel will relish getting in the boat to take a trip with you or swimming alongside you.

The Irish Water Spaniel is often referred to as being the clown of the Spaniel breeds. He is eager to please you, and he will usually do this in an unintentionally daft manner. Of course, his curly hair may also be the reason for his nickname. As a Spaniel, the Water Spaniel is very inquisitive and nosey. He is also alert but, unlike most other Spaniels, he can be quite wary around strangers. He shouldn’t be shy and will not be aggressive, but he may not be as forthcoming as you would expect from a Spaniel.

The Water Spaniel is child friendly. He’s silly and he truly appreciates anybody that will revel in this. If your son or daughter laughs at him, they will bond for life, and they are willing to join in with his antics, you may struggle to separate them. The Spaniel is also quite a hardy and rugged dog, which means that he can put up with smaller children who do not necessarily know how best to act around dogs yet.

Although the breed can be reserved around strangers, they do not tend to be possessive or overly protective. So, while he might not welcome strangers, he won’t scare them away either. And, after a successful meeting, he won’t consider your friends to be strangers any longer.

The Irish Water Spaniel is also known to get along with other animals. He does have a high prey drive, but this is not through aggression and not typical in his own home. You should try to introduce him to other pets as early in his life as possible and ensure that he is well socialized throughout his life. By doing this, you shouldn’t have any problems introducing an Irish Water Spaniel to any people or animals.

Things to Know When Owning an Irish Water Spaniel:

The Irish Water Spaniel is a revered retriever, loves getting out and spending time in the water, and he is as skilled at agility as he is in the field. He can also make a great family companion, but his headstrong attitude and his high energy levels mean that he isn’t the best breed for all potential owners. Before taking on one of this breed, consider the following factors.

The Irish Water Spaniel is considered a medium-sized breed, but because he is highly active and takes a lot of exercise, he has a high dietary requirement even when compared to other breeds of a similar size. You should expect to feed your Spaniel between 1.5 and 2.5 cups of good quality food per day. If he exercises a lot, expect to feed on the higher end of the scale. You mustn’t feed too much, because your dog can become overweight, which will make him susceptible to heart disease, diabetes, and other illnesses. Measure his food, split his daily food allowance over two meals, and reduce his food intake if you use treats and food as a reward for good behavior during training.

A healthy, fully grown Irish Water Spaniel requires 1-2 hours of vigorous exercise every single day. While he will enjoy walks, he will prefer to be let off his leash or given task-based exercises to perform. He will especially enjoy activities like retrieval and anything that involves water. Sign up for agility classes, take him hiking, and pop him in the boat or canoe next time you head down the river. He will appreciate all of these forms of exercise and will benefit from the variety.

The Irish Water Spaniel is an intelligent dog and he does like to please his owner as all good Spaniels and retrievers do. However, he can also be easily bored and quite headstrong. He will decide whether something is worth his while, and if he doesn’t want to do it, it can take a lot of effort to persuade him otherwise. As such, this breed might not be ideal for first-time owners that do not have experience with difficult training.

Be persistent when training any new commands or behavior. Ensure that you mix up the training regimen and try different games and training practices to keep it fresh and interesting. You might also find that short training periods are better than long.

The Irish Water Spaniel has a distinctive looking coat. His curly hair is similar to that of a Poodle, and he has a crown of it on top of his head, as well as a beard that will usually grow under his chin and towards the back of his neck. This coat does not shed much, which makes the breed suitable for those with dog allergies. While the coat does not take as much care as that of a Poodle, which looks very similar, it does still require weekly brushing.

As a water-loving retriever, you should check your Water Spaniel after he has been in lakes and other bodies of water. Look for insects and animals that might have taken lodge in their coat, and safely remove them where possible. Also check inside his ears, because although his ears are designed to stop water, there is still the risk of some water borne insects and dirt getting in and leaving him with an ear infection.

Regular grooming isn’t strictly necessary, although he will need a bit of a trim twice a year. You shouldn’t shave his hair right down as is common with Poodles, but you will have to trim to keep him in top condition.

Brush your dog’s teeth three times a week or daily if they allow it. Clip their nails roughly every month or two, taking care to avoid the quick and checking his webbed toes out at the same time.

The Irish Water Spaniel is considered a fairly healthy breed, although their lifespan is quite short for a dog of this size. As with any breed, ensuring that you give them a good diet and that they get plenty of high-quality exercise, will help prolong their life and keep them free from illness and disease. No matter how careful you are, though, there are some conditions that they are prone to.

The male Water Spaniel will grow a little larger than the female, and a lot of owners insist that the male is less likely to listen to training and thus, can be more of a challenge to handle. However, they are also known to be friendlier and more loyal.

In many ways, the Irish Water Spaniel is typical of the Spaniel family. He is lively and energetic, has a loving and caring side which means he will follow you everywhere, and he will usually get along with all family members. However, unlike other Spaniels, he can be quite reserved around strangers. And, as much as he enjoys pleasing his owner, he can also be quite headstrong when it comes to training, and bores easily, which means that he isn’t considered an easy breed for novice handlers.

Be prepared to get outside and provide a lot of exercise, if you do take on one of this breed. They will run for seemingly hours without slowing, and they are perfectly equipped to spend long sessions in the water, too, thanks to their protective coat and their webbed feet. Here’s hoping you find a friend in one of these unique pups!