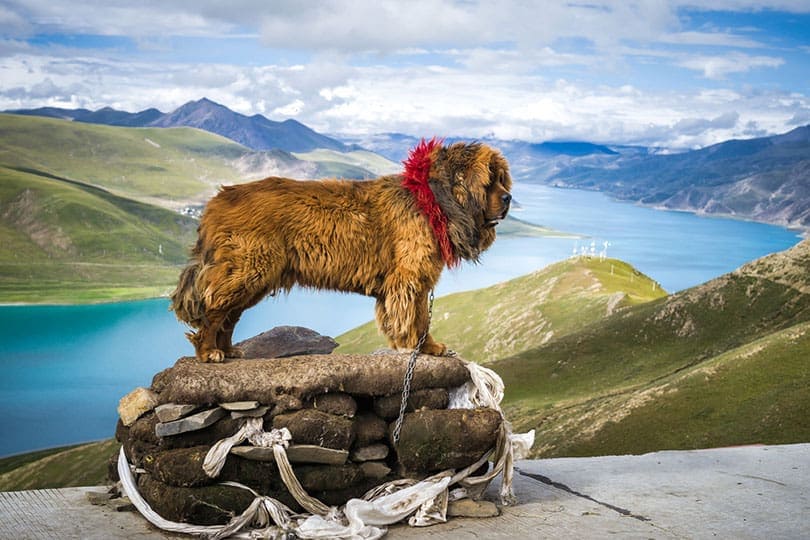 The country of Tibet lies on the northern side of the vast Himalayan mountain range. Tibet is one of the highest inhabited areas on earth and has the nickname “roof of the earth” due to its towering peaks, which include the infamous Mt. Everest. It is also one of the most secluded regions on earth, with the average mountain in Tibet standing above 20,000 ft. and making the area difficult to access. The area holds the third-largest store of water and ice, after only the Arctic and Antarctic.

Eastern beliefs like Buddhism — one of Tibet’s most prominent belief systems — hold animals in high reverence, and Buddhist monks throughout the centuries have played a key role in developing and preserving Tibet’s most iconic dog breeds.

This small isolated country is home to some of the world’s most beautiful dog breeds, including one of the world’s most expensive. We put together a list of the unique breeds originating in the region, along with a few popular hybrids, to help you get to know these beautiful dogs a little better. From the Lhasa Apso to the Tibecot, here are the 12 Tibetan dog breeds:

The small, loyal, and devoted Lhasa Apso is well over a thousand years old and spent most of their history as a dedicated companion in monasteries high up in the Himalayas. The defining characteristic of these tiny pooches is their floor-length coat, which parts in the center of their back and flows downward to the floor. The breed has long been associated with the Dalai Lama and owes its existence in the United States to the 14th Dalai Lama, who often gave them as gifts. Lhasa puppies are far slower to mature than most breeds, and they typically are only ready for their new home at 10 weeks old.

The Tibetan Kyi Apso is native to the Mt. Kailash region of the Tibetan Plateau and is a highly rare animal — so rare, in fact, that very few or none of these dogs exist outside of Tibet. The breed was originally kept to protect livestock and as a guardian of their owners’ homes, and their coat has traditionally been kept and weaved into small carpets. The breed was unknown in the West until 1937, when a photograph emerged showing the 13th Dalai Lama and what appeared to be a Tibetan Kyi Apso.

The ancient and giant Tibetan Mastiff was originally bred as a guard dog for livestock but is more commonly found today as a loyal companion animal. These dogs are patient, calm, and loving animals, and their centuries of working closely with people show in their adaptable character. Their massive size makes them a wonderful guard dog but also a handful to look after. One of the most expensive dogs ever sold was a Tibetan Mastiff, fetching $1.9 million in 2014, leading to a subsequent surge in breeding.

The small and self-confidant Tibetan Spaniel was bred centuries ago for sentinel work in Tibetan monasteries. They are known for their silky coat and the distinctive “lion’s mane” that wraps around their neck. They are highly alert and active little pooches that crave human attention and companionship — these dogs don’t enjoy being left alone and will act out in mischievous ways if not given sufficient attention. Their high intellect and eagerness to please makes them easy to train and ideal family companions.

Also known as the “Holy dog of Tibet,” the Tibetan Terrier is a loyal, affectionate, and highly sensitive pooch with a long association with Tibetan Buddhism. They have a distinctive long, straight, and silky coat and large “snowshoe” paws that are adapted to navigate the harsh and snowy terrain of the Himalayas. The “Terrier” part of their name is a misnomer — they are not true Terriers by nature, but the name given to them by Westerners stuck. They are native to the “Lost Valley of Tibet,” where they were highly valued companions and said to have brought luck to whoever owned them.

The Shih Tzu is a pint-sized toy dog breed with a big heart, and their name literally means “little lion.” These dogs were bred solely as companions, though, and there is actually not much lion-like about them! They have distinctive long locks that cover their entire body, with a topknot typically tied on their head to allow them to see. These good-natured dogs are ideal for novice owners because they have no prey drive, are intelligent and easy to train, and are friendly with just about everybody. The only difficulty in owning one of these unique pooches is the constant grooming to maintain their elegant coats.

A cross between the Shih Tzu and Toy Poodle, the Shih Poo is about as adorable as they come. These dogs are the quintessential lapdog — adaptable, loving, gentle, and patient — and they make the perfect companion for almost any situation. They have a moderate energy level and will enjoy playing and walking with their owners as much as a snooze in their owner’s lap.

The Kobetan is a rare breed, a mix between a Tibetan Terrier and Cocker Spaniel. While these dogs are rare and relatively unknown, their popularity is on the rise due to their gentle and kind nature. They have a ton of energy, though, and require a great deal of daily exercise to stay happy. They are adaptable animals that are well-suited to apartment living provided that they get adequate exercise, and their even-temperament and gentle nature make them great family pets.

A mix between a Maltese and Tibetan Spaniel, these little dogs are full of energy and personality. They are great with small children and other pets and are social animals that love to be around their family. These dogs are highly intelligent and easy to train, making them the ideal choice for families and novice dog owners.

The affectionate and energetic Ttoodle is a mix between the Standard Poodle and Tibetan Terrier. These dogs are highly intelligent and have a great deal of energy that requires daily exercise to keep them out of mischief. Although somewhat wary of strangers, they are great with children, and their gentle nature makes them exceptional family animals.

A cross between the Tibetan Terrier and Coton de Tulear, the sprightly Tibecot is a great companion animal and makes an excellent family dog. They are extremely social dogs that are prone to separation anxiety when left alone for extended periods and may act out by barking, digging, and chewing. While they are usually fine with other dogs, albeit a little bossy at times, they may chase smaller animals and cats due to their Coton heritage.

The Tibepillon Terrier is a cross between the Papillon and Tibetan Terrier, these dogs are highly active and affectionate and likely to be vocal at times. With early socialization, these dogs are great with other dogs and pets and are gentle, patient, and playful with small children. They are adaptable pooches that do well in apartments, although they tend to bark frequently if not sufficiently trained.

What Were Boxers Bred For? Boxer History Explained