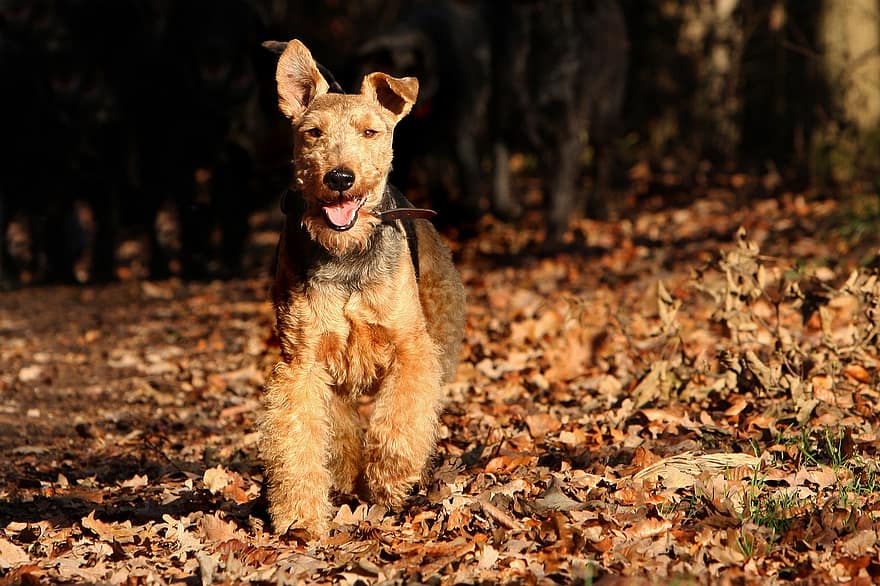 The Welsh Terrier brings a storied past with him as a hunter and faithful companion to people living in remote Wales. He takes his job seriously with an intensity that makes him worthy of the task. He is all terrier with the spirited willfulness you’d expect from these dogs. However, this breed offers something much more for the individual or family that can give him what he needs.

This canine is a friendly pooch. He likes people and other dogs. He may chase other pets, but he has a good heart. This pup doesn’t have a lot of special needs. He is also a healthy dog without a lot of glaring issues. Grooming is relatively easy, too. If you’re looking for a smaller pet, the Welsh Terrier is worth a look for all the benefits he offers for the right family.

Welsh Terrier Puppies – Before You Buy…

When you get a terrier, you know that you’re in for a treat. These dogs are active and spirited. They don’t let their smaller size get in the way of you noticing them or making themselves heard. Part of it rests with their historical roles. You had to be tough to fight a foe that was equal or more than your size. That was the role of the Welsh Terrier and others of its ilk.

The Welsh Terrier is high-energy, which is essential to understand from the get-go. He needs exercise. He is driven when it comes to the presence of small animals. This pup will follow through with his job, which ups his wanderlust potential. Keep an eye on him when he is outside. Owners must take an upper-hand in training and socialization to make the most of the pet-owner relationship.

The Welsh Terrier is surprisingly low on the list of popular breeds with the American Kennel Club (AKC). That’s a good and a bad thing when it comes to what you can expect to pay for a puppy. You might not have a lot of competition for puppies, yet there are not as many available as a pup like the Labrador Retriever. You can expect to pay between $800–$1,200.

1. The Welsh Terrier Has Captured Many Famous Hearts

It’s easy to understand why someone could fall in love with the Welsh Terrier. Many celebrities have, including Caroline Kennedy, UK Chancellor Philip Hammond, and Prince Edward of Wales.

2. The Welsh Terrier Shares a Common Ancestor with Other Terriers

If you think that the Welsh Terrier looks like others in its group, you wouldn’t be far off the mark. This adorable pooch descended from the Old English Black and Tan Terrier, along with others, such as the Airedale and Lakeland Terrier.

3. The Welsh Terrier Has a Unique Way to Let You Know He’s Displeased with Something

It’s an inside joke with terrier owners and something they all know and recognize. If the Welsh Terrier doesn’t get his way or is upset about something, he’ll give you the look, otherwise known as the stink eye.

Temperament & Intelligence of the Welsh Terrier

Overall, the Welsh Terrier is a smart dog. He isn’t especially prone to being nippy, either. However, he can be vocal, which will require some training to tame. Also, he has an independent streak, which isn’t unexpected, given the breed’s history. That means he is often a digger, too. After all, one of his jobs was to hunt badgers.

The Welsh Terrier is about as happy-go-lucky as you can find in a dog. He loves people and his kin. He is friendly without being needy. He’s also moderately adaptable to different living situations. This pooch needs an active individual or family to keep him healthy, mentally and physically. While not the best choice for new pet owners, he is a welcome addition to a home that can understand his needs.

For a dog of its group, the Welsh Terrier is surprisingly dog-friendly. Early socialization is crucial, of course, to make sure that he gets along with everyone okay. Other pets are another story. As a hunting dog, he has a strong prey drive and will chase any animal that runs away from him, including the family cat. He is also an intense canine that takes his job seriously.

Things to Know When Owning a Welsh Terrier:

Every breed has its idiosyncrasies. After all, that is an integral part of selective breeding. Some dogs have specific jobs for which some traits make them better suited to the task. The Welsh Terrier, like many of its kind, were and are hunters, going after pests like otters, badgers, and foxes, in this case. Their well-matched prey makes this pouch a tough customer. He is willing and able to fight when necessary.

This pup has a moderate propensity to gain weight. His high energy level alleviates some of the concerns about him getting obese. The Welsh Terrier is a smaller dog and, thus, needs modest-sized frequent meals as a puppy to avoid hypoglycemia. His metabolism runs about as fast as he does. Monitor his food intake and weight to keep him healthy.

It’s essential to feed Welsh Terriers and others of his size a pet food formulated for smaller breeds. These dogs grow faster than larger ones like Great Danes. They need a diet that ensures the proper energy density to match their development. Three meals a day is ideal for a pup. You can then cut back to two when your pet is an adult.

The Welsh Terrier does best when he gets lots of activity to match his spirited nature. He is a small dog with a lot of energy. He’s very playful and is always ready to catch a ball or take up the challenge with a round of tug-of-war. This pup will do well with a daily walk to work off some steam. He always is ready with his A-game and puts his all into whatever he does.

Like many other breeds in its group, the Welsh Terrier is often a handful if you don’t socialize him early on in the game or take the upper hand with discipline. However, he is agreeable for the most part and will respond well with the right owner. While he is intelligent and can learn a lot, this pup probably isn’t the best choice for a first-time pet owner because of his occasional stubbornness.

The Welsh Terrier has few special grooming needs. Occasional brushing, nail trimming, and ear maintenance will cover most of the bases. You should also get him clipped regularly, too, to keep his coat looking its best. He does shed, but it’s not too bad. Regular care will cut down on the amount of hair you have to vacuum.

Overall, you’ll have few health problems with a Welsh Terrier. It’s one case where the breed’s lower popularity is an asset. That means less inbreeding, which can increase the propensity of inherited issues. The main concerns rest with the eyes and some of the typical things you’d see with other terriers. We suggest sticking with breeders who do the recommended health screenings.

Male and female Welsh Terriers make equally good pets for the right owner or family. Both are quite close in adult size. The primary difference comes down to whether you want to breed your dog. Neutering is less expensive than spaying a pup. In any case, we strongly urge you to get it done if you’re not planning on a litter.

The Welsh Terrier is sometimes a challenge, which isn’t a stretch when you consider his history as a hunter. His fierce foes required an equally hard-nosed match. Although he is sometimes feisty, he is always a joy to be around, whether as a walking companion or simply as a loyal pet. His attention and devotion to his family make life with this independent thinker a new adventure every day.