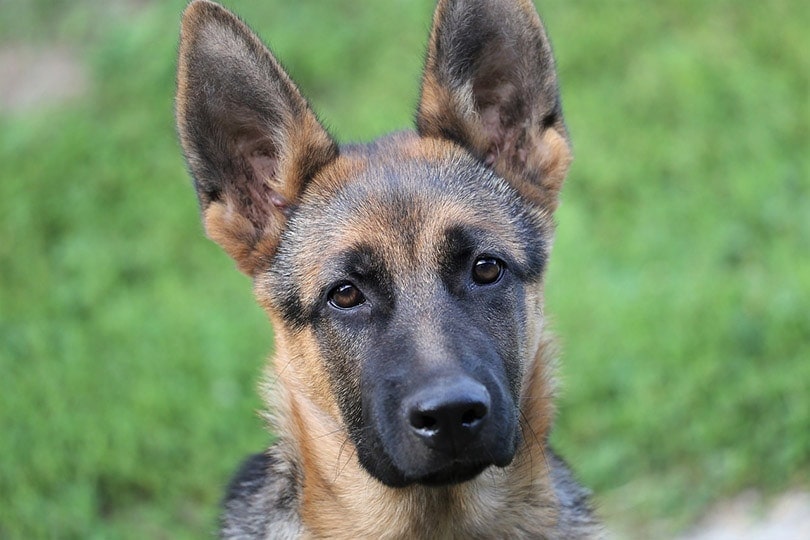 German Shepherds have a distinctive look that includes alert, erect ears. As puppies, however, German Shepherds’ ears are floppy and take time to stand up. Many owners are eager to see their pup’s ears stand up to get an idea of how their pup will look as an adult.

So, when will a German Shepherd’s ears stand up? For most pups, the ear cartilage begins to harden around week 20, or when the pup is finished teething. At that point, it can take up to 20 weeks for the ears to stand up fully. This can vary by the individual, however.

Though German Shepherd puppies look adorable with their soft, floppy ears, their look is a far cry from the alert and regal look of an adult GSD.

Typically, puppies at 8-9 weeks will have floppy ears that occasionally stand up but quickly fall back down. Around week 20, or 5 months, your pup is done teething and its ears will begin to harden and stand.

In the next 1-2 months, your pup’s ears should be alert and perky. If they still aren’t standing, it may be cause for concern. You can speak to the breeder about the parents and littermates, and gauge how your pup’s ears are developing respectively. Your vet may have some suggestions to help the process along.

If your pup reaches 8 months and still has floppy ears, the chance of them standing on their own is slim.

Reasons Why Your German Shepherd’s Ears Aren’t Standing Up

Some German Shepherds are predisposed to floppy ears because of their genetics. If this is the case, there’s not much you can do about it. Some breeders try to breed for larger ears, leading to ears that are too heavy to stand up. If strong, alert ears are important to you, be sure to look for a pup with parents that have erect ears.

German Shepherds’ ears begin developing from birth to around 20 weeks. If the ears sustain trauma during that time, it can cause permanent damage to the cartilage. This may include rough play with biting or pulling on the ears from other puppies or a child tugging on your puppy’s ears. Avoid playing with your puppy’s ears while they’re developing, monitor play between dogs, and teach your children to steer clear of the ears.

Puppies can contract parasites in a number of ways, including eating things they shouldn’t. If your puppy gets parasites, it can impact healthy development, which includes the hardening of its ear cartilage.

Be sure to take your puppy to the vet regularly and have routine fecal exams to check for worms and other parasites. Your vet can recommend an appropriate deworming protocol for your growing puppy and treat parasites if they occur.

How to Help Your Puppy’s Ears Stand Up

A puppy’s ear development is a natural process that takes time. However, if you want your puppy to have strong, alert ears, you can help the process along in a number of ways.

Cheap dog food often has poor nutrition, which may impact your puppy’s cartilage development. High-quality commercial food formulated for puppies is the best choice for supporting your pup’s nutritional needs.

In an effort to move ear development along, some owners will add supplements like calcium. This isn’t always a good idea, since it can negatively impact your puppy’s skeletal growth. Be sure to speak with your vet before adding supplements to your puppy’s food.

Chew toys give your puppy’s jaw, head, and neck muscles a workout, which is important for ear development. Chew toys are also good for teething and keeping your puppy occupied. German Shepherds are strong, even as pups, so be sure to choose solid, durable chew toys that are safe and appropriate for your puppy.

Ear taping is a popular method for helping a German Shepherd’s ears stand up by providing support for the cartilage to strengthen. It should only be used as a last resort, however. If you use tape too early, it can hinder natural development. Speak to your vet or breeder about taping your puppy’s ears to make sure it will help and not harm.

Taping should only be considered if your puppy’s ears are not standing between 5-6 months, but never earlier. That said, if you wait until the seventh or eighth month, it may be too late to help.

Here’s what you need for ear taping:

How to tape your puppy’s ears:

When done properly, taping is a safe and effective method for getting your puppy’s ears to stand up.

A German Shepherd’s erect ears are a distinctive breed trait for adults, but puppies have adorable floppy ears that stand up over time. If your puppy’s ears aren’t standing on their own at 5 months, don’t panic! If they’re still not standing at 6 months, you can consider alternatives. Keep in mind, however, that some German Shepherds’ ears never stand up and floppy ears have no negative impact on their health.

How Many Puppies Can a German Shepherd Have in a Litter?