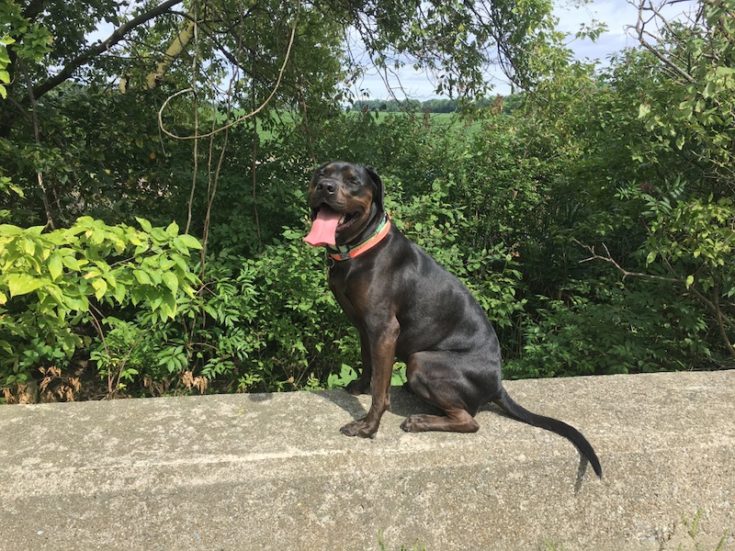 The American Bulldog and Neapolitan Mastiff mix is a large dog predominantly bred in the United States. This breed resulted from the crossing of different types of Bulldogs and Mastiffs in a bid to create a guard dog that was family-friendly. The idea was also to retain the wrinkled face typical of Mastiffs.

American Bulldog and Neapolitan Mastiff Puppy— Before You Get One

The American Bulldog and Neapolitan Mastiff is an extremely energetic dog, which means you will have to give them adequate exercise to keep them from being destructive. They are also intelligent, which makes them easy to train — if you know what you’re doing.

The breed scores highly on health, but it is important to get the puppy from a reputable breeder to ensure that you get a healthy animal.

With proper care, this breed can live for up to 15 years. To avoid negative experiences, ensure that you socialize them properly.

1. They Are Not Temperamental

Well-trained dogs of this breed will typically wait for your go-ahead before they act on something.

Despite being bred from strong and independent canines, these dogs are extremely loyal to their masters. This means that they will always look up to you for guidance.

3. They Have an Awesome Heritage

American Neo Bulls have been bred from bullfighting (American Bulldogs) and arena fighting (Neapolitan Mastiffs) breeds. This means that they are capable guard dogs.

As mentioned, this is a hybrid breed that came about as a result of crossing Bulldogs with Mastiffs, specifically American Bulldogs and Neapolitan Mastiffs, hence their name. They also go by the names, American Neo Bull and American Bandogge Mastiff.

Breeding started in the ‘80s, and over the generations, breeders have been looking to retain the gentle attitude and wrinkled face of the Mastiff, while breeding out the health conditions that they are predisposed to.

American Bulldogs trace their origins back to Great Britain and were brought over to the U.S. during the colonial period. These canines were typically used in farms in the South, where they helped in hunting or fighting bulls, bears, and buffaloes. Over time, however, they became popular family and guard dogs. Unfortunately, the AKC has yet to recognize American Bulldogs as legitimate breeds.

While a true American Neo Bull should be 50% Bulldog and 50% Mastiff, these percentages differ depending on the breeder. This is why it is important to do your research on a breeder before getting pups from them.

The American Bulldog and Neapolitan Mastiff Mix is a large dog, with males weighing up to 75 pounds and reaching a height of 79 centimeters at the shoulder. Females weigh between 60 and 70 pounds.

This dog displays physical traits from both parents. For example, just like the Mastiff, the Neo Bull is thick-boned. They are also as heavily muscled as the Bulldog.

The typical Neo Bull has a large and deep chest, wide shoulders, and a thick, muscular neck. They also have strong, sturdy legs that give the animal the graceful, tiger-like gait that Mastiffs are famous for. Nonetheless, despite their size, the Neo Bull is an incredibly athletic dog.

The American Neo Bull’s face retains the Mastiff’s wrinkles, with eyes that vary from gold to dark brown and ears that drop to the side of their face. Some pet owners opt to crop their Neo Bull’s ears.

This canine has a short snout with a wide nose and large nostrils. They have a short, dense, and waterproof coat with a texture that ranges between smooth and harsh. A Neo Bull’s coat color can be either solid or a combination of colors, such as black, brown, fawn, blue, brindle, white and gray.

They have a straight tail that is thick at the base and tapers at the tip.

Temperament & Intelligence of the Neo Bull 🧠

The Neo Bull is a laidback, gentle, and affectionate animal, with a strong devotion to those they are loyal to. These dogs can also be incredibly overprotective, which can make them aggressive. Therefore, proper training is crucial to ensure that your dog plays well with everyone.

The Neo Bull’s size can also be an issue when it comes to small children. Even though they are gentle, their large stature can cause them to knock over children accidentally. They can also be quite playful, so it is necessary to supervise them when playing with young ones.

With the right training, Neo bulls are generally docile, fun-loving animals with a desire to please their family.

Fortunately, this breed does well with other pets, as long as you socialize them properly. The American Neo Bull is also intelligent and as such, can be incredibly strong-willed, which can make them difficult to train. This is why this breed is not recommended for first-time dog owners. Under the care of an experienced handler, however, training this dog is easy.

Things to Know When Owning an American Neo Bull:

Just like any other canine, the American Neo Bull is a carnivore, which means that most of their food should be meat-based. A diet consisting of meats such as chicken, tuna, and turkey will work well for them.

Unlike cats, however, dogs are not obligate carnivores, which means that they can eat other types of food as well. As such, consider mixing their meat with pasta or kibble to ensure that they are getting carbohydrates as well. Some people opt to give their pets raw food. Before doing this, you need to understand the benefits and risks involved.

Commercial dog food is a good general option, but first ensure that the dog food you choose is appropriate for large dogs such as the American Neo Bull. Such foods typically have a high protein content.

Also, consider giving them foods high in essential fats, such as fish, flaxseed, and linseed. Fats help keep the canine’s joints healthy. Give your Neo Bull dry foods consistently, as these help maintain their dental health.

Before you feed your dog, first make sure that they are calm and relaxed. Additionally, try to feed them at the same time every day so you can establish a routine. Do not play or engage in physical activity with them while they are feeding. Once they are done eating, allow them to rest for about an hour before engaging with them.

The American Bulldog and Neapolitan Mastiff mix is large and therefore, requires regular exercise to keep them fit, as well as drain their energy. As such, if you cannot afford the time for exercise, this breed might not be for you.

Neo Bulls are large, powerful dogs, and they need firm, consistent training to function well in the home. A handler needs to be firm and assertive without being harsh. This is because Neo Bulls can be sensitive to the tone being used on them.

Neo bulls can be extremely dominant.  As such, for this dog to obey you, they must first know that you are in charge.

This breed does not have many grooming needs. Their coat is short and dense, which means that it does not shed much. As a result, brushing their coats occasionally to keep them free of debris is all the maintenance you need to do.

However, it is necessary to give them a bath periodically to keep their coat in mint condition. Be sure to also inspect their skin thoroughly, especially on the face, as the wrinkles are prone to infections.

Also, make sure to keep their nails trimmed while checking the state of their feet. This is because the dog can be prone to feet issues due to their weight.

Even though the American Bulldog and Neapolitan Mastiff mix is a healthy dog breed, it is predisposed to certain health issues: such as elbow and hip dysplasia, in addition to congenital diseases.

The American Neo Bull is a gentle giant who makes for a fantastic family and guard dog. However, due to their intelligence and dominant personality, they can be difficult to train, which is why they are not recommended for first-time owners.

If you insist on having one, understand that you will need to be patient and assertive with the dog, without being overbearing. American Neo Bulls are extremely sensitive animals who do badly with negative reinforcement.

To reduce the risk of health issues, make sure that you get your pups from a reputable breeder. These kinds of breeders utilize health-screening techniques that allow them to predict how a pup is going to do health-wise. Reputable breeders also keep in contact throughout the dog’s life to help you raise a healthy and well-trained dog.

As such, the first step to getting a healthy American Neo Bull is identifying a reputable breeder. If you get a Neo Bull pup with a great heritage and provide them with proper care and training, they might turn out to be the best dog you ever had.