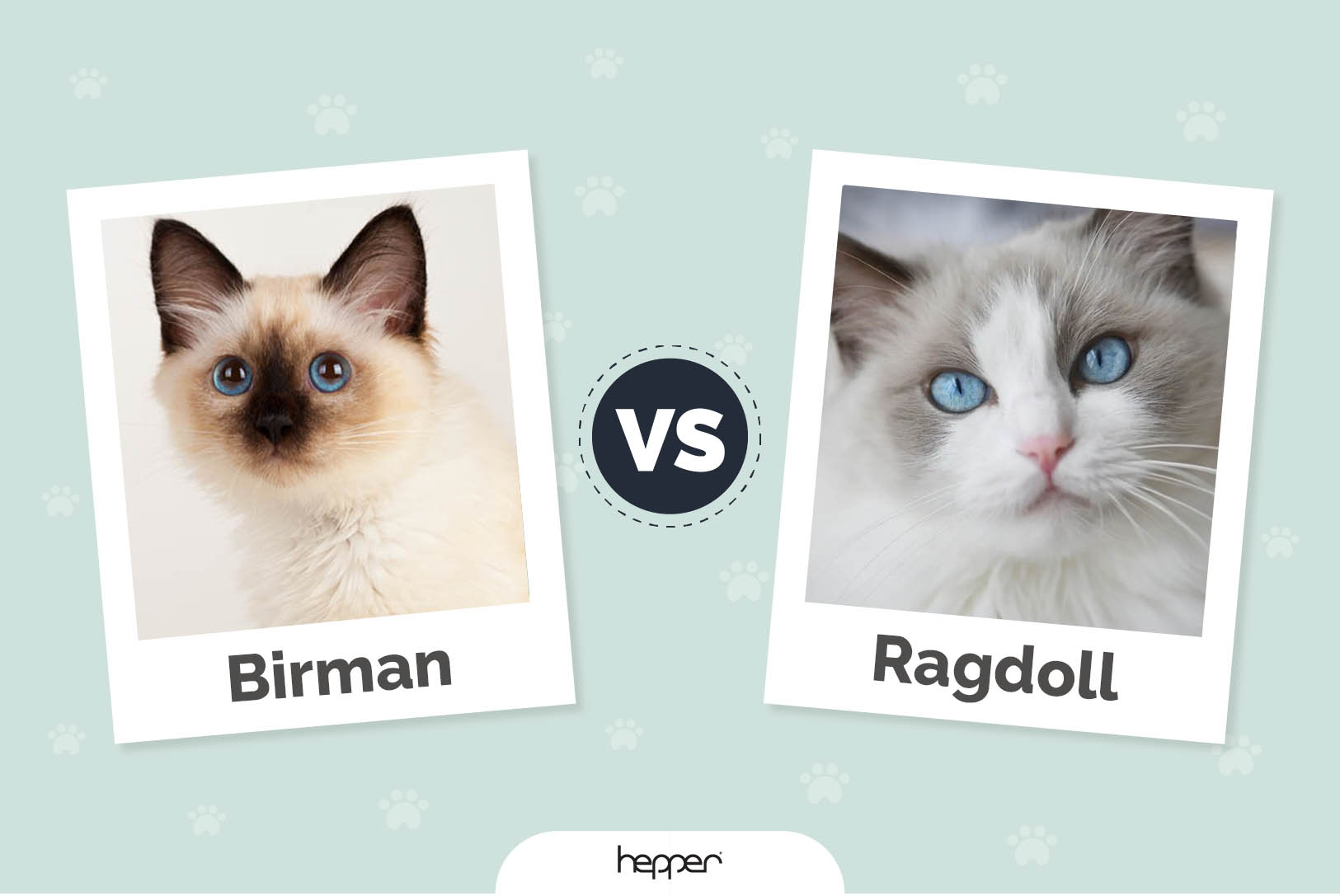 People confuse the Birman and Ragdoll breeds all the time. We can’t deny that it’s a bit of a challenge to tell them apart if you haven’t owned or been around one of these breeds before. Even though their physical looks are similar, there are many differences between these two cats that show you how many differences there are between the two. When you take the time to research what these differences are, you can make an informed decision about which one is going to fit into your personal lifestyle best. T

his article goes over every aspect of how these two breeders differ. From looks to temperament, one of these cats is definitely better for you than the other.

The Birman cat is a rare breed that originates from Myanmar, also called Burma, and was officially recognized by France in 1925. It wasn’t until 1967 that they were recognized in the United States.

Birman cats are not that genetically diverse, so most of them look very similar and are prone to several health problems. This breed has long, silky hair and deeper blue eyes. Most of them have different colored socks on each foot from their body as well. Most Birman cats grow about 8 inches tall and weigh around 10 pounds.

There aren’t many cats that are as loving and affectionate as the Birman. These cats are bred for companionship and adapt well to the family lifestyle. Most have a docile and quiet temperament, and they don’t tend to be very vocal.

Birman cats are not the most intelligent breed, but they are still smart and trainable. They love people but aren’t so needy that you must pay attention to them for a good chunk of your day.

Because they don’t have diverse genetics, there are quite a few health issues that these cats are prone to. The biggest threat to this breed is feline hypertrophic cardiomyopathy, which eventually leads to paralysis of the back limbs and heart failure. They are also at a higher risk for kidney disease.

Cats with long coats usually leave patches of hair around the entire house. Even though the Birman does have a long coat, the shedding isn’t nearly as bad as it is with other long-haired breeds. Brush these cats about once per week to keep the fur from matting. Most cats should do a decent job of keeping themselves clean. Don’t forget to take them to regular vet appointments for deworming and check-ups.

Ragdolls are a little more popular than Birmans. These cats were bred right here in the United States in the 1960s. Today, they are popular in countries around the world.

The Ragdoll has an unforgettable look. They have large, muscular bodies with medium-length, soft coats. Ragdolls have light-colored bodies and darker patches on their face, legs, tails, and ears. There are three patterns associated with them as well. Ragdolls cats reach about 9 inches tall and weigh around 10 pounds.

Ragdoll cats are mostly famous for their personalities. They have such good personalities that there is a rumor that they act more like dogs than cats. Ragdolls are affectionate and love to be handled and cuddled. These cats are also highly intelligent, and one of the easiest cat breeds to train. These cats are actually descended from the Birman breed, which explains their similar looks and docile personalities.

Ragdolls have been inbred in the past. Today, they have some urinary and kidney issues to look out for. Like the Birman, they are also prone to hypertrophic cardiomyopathy.

The coat of a Ragdoll isn’t as long as the Birman’s coat. They don’t require a lot of grooming but do benefit from a weekly crushing. Again, cats do a good job at keeping themselves clean and don’t require monthly baths like some other pets.

Which Breed Is Right for You?

There really aren’t too many differences between the Birman and Ragdoll cat breeds. In general, Birman cats are a couple of pounds bigger than Ragdolls, but the Ragdolls are taller on average. Ragdolls also are a bit more affectionate and trainable than Birmans. Either of these breeds is going to be an amazing choice as a new pet. If you give them lots of love, they’re going to love you back even more. Both breeds are kind, docile, and smart. Whichever you go with, you can be confident that you won’t make a mistake that leaves you with overwhelming responsibilities and regrets.

How Much Does A Norwegian Forest Cat Cost? (2022 Price Guide)