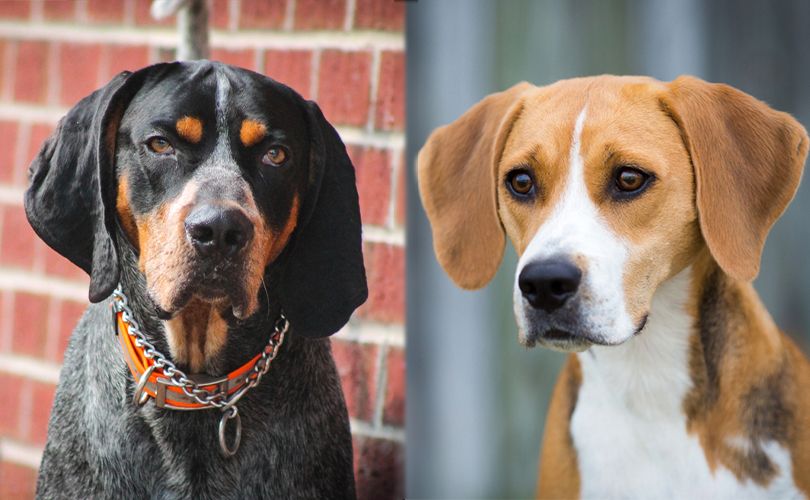 Bluetick Coonhound Harriers are a mix between Bluetick Coonhounds and Harriers (find out the difference between a Harrier and a Beagle here). They tend to be pack-oriented dogs that can be outgoing and friendly. They act very similarly to hounds, which means they may decently calm pets. They bond deeply with everyone and can be very devoted to their owners. However, they can also be a bit stubborn.

Because this is a mixed breed, you never know exactly what you’re getting. These canines can inherit any trait from each of their parents. Some of these dogs might look exactly like one parent but act like the other. You never know what traits a puppy is going to inherit.

Bluetick Coonhound Harrier Puppies – Before You Get One…

These dogs are hounds through-and-through. A Bluetick Coonhound was bred to be a compact, nighttime hunter. They have a very strong prey-drive and will pursue prey continuously. They have a baying bark that is common amongst most hounds. Harrier is also a hound and resembles a muscular and slightly larger Beagle. They were bred to hunt as well and also have very strong prey-instincts.

Because of this, the Bluetick Coonhound Harrier is also a hunting dog. Once they get a scent, they will follow it, which is why you shouldn’t let them roam freely. These dogs can easily get lost after following a scent trail. They can cover a lot of ground in a little amount of time when they are on a trail, so they can quickly get far away from home.

They were made to run around all day. Because of this, they need a lot of activity. They can be stubborn because of their hound nature, but they are pretty easy to train as they are very food-driven. With some consistency, training can be relatively easy.

Because this is a mixed breed, it is not recognized by any organization by being an actual breed. It can be challenging to find breeders for this reason.

2. The Harrier is likely an ancient mixed breed.

The Harrier is likely a mixed breed between a variety of different breeds, including Beagles and Foxhounds. However, it has been bred for so long that the AKC recognizes it.

They tend to hunt slowly, but they are very accurate. They can quickly get overtaken by dogs like Beagles.

Like most hounds, these dogs are known for being outgoing and friendly. They don’t have an aggressive bone in their body and are perfectly fine around family and strangers alike. They are very human-oriented and love hanging out with their family. They are bred to get along with other dogs, so they are typically okay with other dogs.

They are usually very well behaved indoors and tend to lay around much of the time. Bluetick Coonhound Harriers are “40-mile-per-hour couch potatoes”. They can get going when they want to, but would typically rather lay around. They are quite intelligent, which makes them somewhat prone to boredom. They love to play with their family members, though.

They can be very vocal and noisy, but they aren’t precisely “yappy.” These dogs tend to bay like their parents. They will bark when someone knocks on the door – and jump up to greet them.

Yes. These dogs are very good with families. They are kind and gentle. With children, they are very patient. They like to play, but they aren’t so rough that they will knock children over while playing. They’re easy to train and reliably well-behaved in the house.

If they’re trained and socialized early, they can make some of the best companions.

For the most part, they get along just fine with other dogs. They are pack-oriented, so they warm up to other dogs quickly. It usually doesn’t matter the breed or the sex either. They love other dogs and get along with most of them.

If they are socialized early, they tend to get along well with practically every dog.

However, they have a high prey-drive. Because of this, Bluetick Coonhound Harriers tend to chase smaller animals. They don’t do particularly well with cats, rabbits, or similar animals.

Things to Know When Owning a Bluetick Coonhound Harrier

These dogs have the same dietary requirements as most other canines. They do not have any particular dietary needs and are not prone to significant dietary-link disorders. As you might imagine, they can eat your average dog food.

These canines are somewhat prone to obesity because they tend to lay around more than they should. They should be exercised purposefully, as they cannot be expected to get the appropriate amount of exercise when left to their own devices. Their food intake should also be regulated for this reason. Older and particularly lazy dogs may need to be fed a weight management diet.

These dogs were made to go all day. As you might imagine, this translates into their exercise requirements. They need room to run and play. These dogs will not necessarily fulfill their needs when placed in a fenced-in backyard and left to their own devices. Walks and playtime are essential to keep them active and healthy.

Luckily, like most dogs, the energy begins to taper off as they get older. However, they can get lazier as well with advanced age. You need to make sure your older canine meets their exercise needs, even if they would rather lay around for most of the day.

Bluetick Coonhound Harriers have average intelligence. This trait means they can learn to do most things and are smart enough to learn all the commands you likely need them to know. They may even be used as service dogs on some occasions because of this. When training is started early, they are often straightforward to train. They are food-motivated, so treats are a vital part of training.

However, because they are hounds, they can be somewhat stubborn. This trait usually comes out in adult canines more than puppies. These dogs weren’t bred to listen to people, as they usually hunt independently or with a group of dogs. Still, this stubbornness can usually be solved by merely offering treats your dog particularly likes.

These hounds do not require any particular grooming requirements. They do shed, but their fur is so short that it does not typically require much brushing. It isn’t uncommon for them to need a bath. They do not require baths regularly. Instead, you should give them a bath when they are visibly dirty.

Like other dogs, they will need their teeth cleaned regularly. Furthermore, you should plan on trimming their nails as well. This trimming can be done at home, or you can take them to a groomer to get it done. You should keep their ears clean as well. Because they are floppy, they can sometimes trap dirt, which can lead to ear infections.

These are incredibly healthy dogs. They aren’t particularly prone to many health conditions at all. Both of their parents are healthy, as they were bred to work, not necessarily just for how they look. Dogs bred with their looks at the top of the breeder’s mind tend to have more health problems. (For example, look at breeds like the Pug and Bulldog.)

Furthermore, a mixed breed is typically healthier than their purebred parents because they inherit a very diverse set of genes. Diverse genes limit the chances of them developing a genetic disorder.

Males and females are the same in this breed. Males may be slightly bigger, but this breed’s height and weight can vary so much you probably won’t notice.

There is no difference in aggression or temperament between genders. Of course, males may mark more, and females will go in heat. However, these behaviors can be stopped by fixing your pet, which is always recommended.

Bluetick Coonhound Harriers are a healthy and energetic mixed breed. They may be good family pets and first-time dogs, as long as you have the time and ability to wear them out. They are very friendly with their family members and strangers alike. While they have a bit of a stubborn streak, they are still considered pretty easy to train.

Finding one of these dogs can be difficult, though, because few breed them. You may be able to find one at your local shelter, however, as many puppies are accidents.