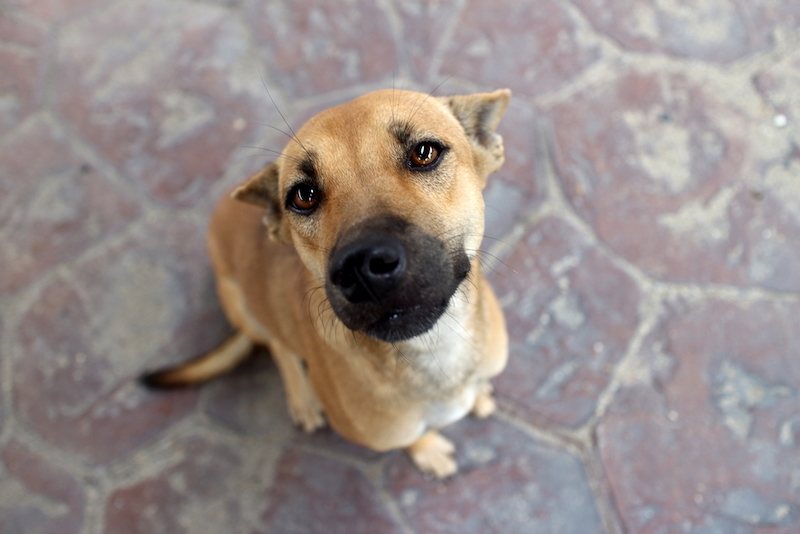 The Golden Boxer is created by mixing the Golden Retriever with the Boxer. This breed is large and can take on the appearance of either parent. If it takes after the Boxer more, it will have a square-shaped head and short muzzle. If it takes after the Golden Retriever, the head will be more round with a longer muzzle. The eyes can be light or dark brown, and the nose will be black.

The Golden Boxer is a new designer breed that appeared in the last decade or two. There is no documentation, and we know little about the habits and unique traits that will develop over time. The Golden Retriever began in Scotland in the early 19th century as a waterfowl retriever. The Boxer is a much older dog that originated in Germany back in the 16th century and is one of the most popular dog breeds.

Golden Boxer Puppies – Before You Buy…

How Much Do Mini Golden Boxer Puppies Cost?

The average new puppy cost of a Golden Boxer is between $350 and $1000. The price will vary widely depending on the breeder as well as the cost of the parents. The litter size can also affect the price. If the breeder runs tests on the puppy to check for genetic health concerns, it can also increase the cost while providing you with a healthier dog.

You may also need to purchase other items if you are a first-time pet owner. Items you may want to buy are a collar, leash, and possibly a crate for your dog to sleep. You will also need to consider neutering and a microchip. Along with these purchases, there will also be annual veterinary costs.

3 Little-Known Facts About the Golden Boxer

1. The Boxer parent gets its name for the way it fights. Often swinging its paws like a boxer.

2. The Boxer lineage can be traced back to Assyrian Empire war dogs.

3. The first three dogs to win the AKC Obedience Champion title were all the Golden Retriever parent breed.

Temperament & Intelligence of the Golden Boxer

The temperament of the golden Boxer is loyal, affectionate, active, and outgoing. They love playing with and entertaining children, and they get along well with other pets. This breed is a little shy around strangers, so they are fantastic guard dogs, but they are not aggressive and quickly make friends.

Golden Boxers enjoy the company of their family and won’t like to be left alone or stuck outside. Too much isolation can cause depression or destructive behavior, which can include continuous barking. It’s intelligent and eager to please, so training will be fun and rewarding for you and your dog.

The Golden Boxer is a great pet to have around families because it likes to clown around with children. It’s also intelligent enough to stay out of the way while you’re moving about the house. It only barks a lot when upset and keeps a close eye on the house while you sleep.

The golden Boxer is calm and relaxed around other pets, especially if socialized at an early age. Regardless, the Golden Boxer makes friends quickly and likes to engage in play with cats as well as other dogs. It will even play with animals that enter the yard on many occasions.

Things to Know When Owning a Golden Boxer

In this section, we present a sort of checklist of things you should consider before you purchase a Golden Boxer.

The Golden Boxer is an extremely active dog that will require a high protein diet that comes from high-quality lean meats like chicken, beef, and lamb. Avoid foods that use meat byproduct or other non-meat as its first ingredient. Following the instructions on the package serve the food in two to four smaller meals throughout the day instead of one large meal.

Golden Boxers are highly active dogs, and therefore will need a lot of exercise each day. You will need to commit to a minimum of two hours of engaging activity per day, which will require you to walk more than 11 miles per week at a minimum. It’s best to get them to run hard to expel the excess energy, so games of fetch and frisbee are ideal.

A Golden Boxer is smart and eager to please, so it’s not unusual for this breed to pick up on commands faster than many other breeds. Positive reinforcement training using rewards for good behavior is the best method to achieve results. Positive reinforcement means to give your pet plenty encouraging cheers and pets along with tasty treats when they complete a task. Never act angry or annoyed if your dog isn’t successful, as this action will deter your pet from wanting to try in the future. Another thing to remember when training is not to drag the session out or try too many tricks at once.

The Golden Boxer may inherit a thick double coat from its Golden Retriever parent, or it may get a short straight-haired coat from its Boxer parent. Either way, it will require daily brushing to help remove shedding hair as well as keep the coat looking nice. The longer double coat may also require frequent trimming and detangling. Its floppy ears will need regular cleaning, and you will need to make sure they stay dry to lessen the chance of an ear infection.

Designer dogs, including the Golden Boxer, are often healthier than their parents due to knowledgeable breeders performing selective breeding. However, some conditions may still get passed on, so we’ll look at the most common ailments afflicting the Golden Boxer in this section.

To help you understand these conditions, here is a brief overview of each:

Hypothyroidism: Inflammation or shrinkage of the thyroid gland causes hypothyroidism in dogs. This condition is often associated with cancer and causes hair loss along with itchy red skin. It can also cause thick skin, painful ears, and a drooping face.

Joint Dysplasia: Joint dysplasia is similar to hip dysplasia, but it affects other joints as well. This condition occurs when the joints don’t form correctly. These improperly formed joints cause the bone to rub instead of moving smoothly, which can wear down the joint, causing pain and affecting its ability to bear weight.

Cancer: Unfortunately, cancer is a very common problem in the Golden Retriever parent breed, and because of that, it can be a big problem for the Golden Boxer as well. There are four different types of cancers that the Golden Retriever breed gets frequently, but hemangiosarcoma is one of the most common and deadly, affecting as many as one in five dogs.

Bloat: Bloat is a condition that causes your dog to swallow air, usually as it eats. This condition is known to affect many deep-chested dogs, and the Boxer is one of the breeds most affected. This condition causes the stomach to expand, which could cut off circulation to the back legs. The stomach can also flip on itself, causing damage to the stomach lining. Bloat is life-threatening and requires immediate attention from a vet.

There is little difference between male and female Golden Boxers in terms of temperament or personality. The male dog is slightly taller and often weighs a few more pounds than a full-grown female.

The Golden Boxer is a great pet to have around the home. They like being part of a large family and get along well with children and other pets. They do require quite a bit of exercise, though, so you will need to commit to that before purchase. Their high energy level may prevent them from being the ideal small apartment pet, and if you work all day, they may get into trouble or take to incessant barking. Otherwise, these are fun-loving, loyal companions that will stay by your side for many years.

We hope that you have enjoyed reading and have decided to investigate these friendly dogs a little more. If you have learned something new, please share this guide to the Golden Boxer on Facebook and Twitter.