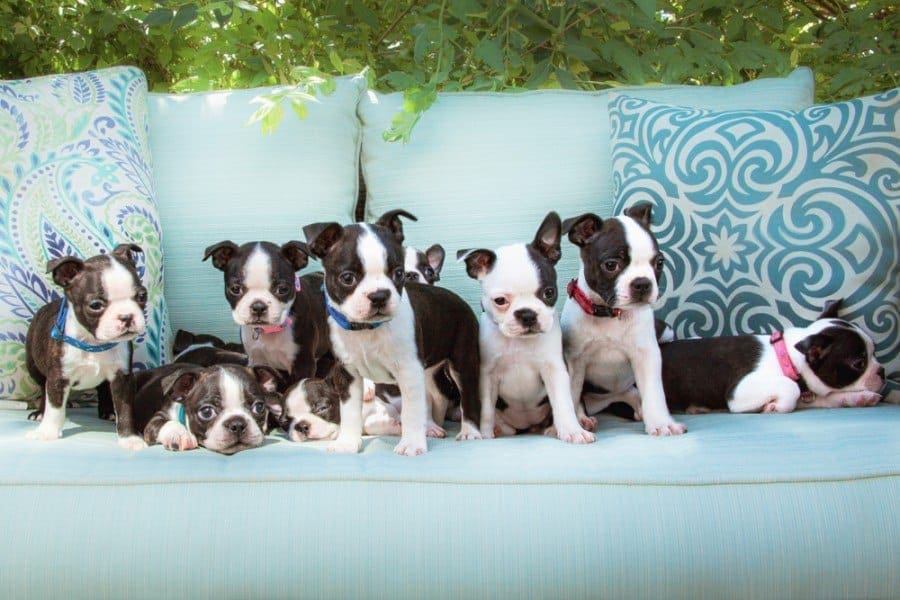 The Boston Terrier is beloved by people and families all around the world. Originating in England, the Boston Terrier has earned the nickname, “American Gentleman,” over the years. Not because this breed has manners or acts like a human, but because it features a coat of colors that typically resemble a  tuxedo that one might wear on a special occasion. But in reality, these dogs are goofy — and tend to be quite gassy.

While you may think of a black dog with white tuxedo markings when you think of the Boston Terrier, the truth is that this breed is born with a variety of colors, depending on their lineage. It can sometimes be tough to identify the different colors when you aren’t already familiar with them. For example, some Boston Terriers are considered seal colored. To most people, the seal color looks black. But when the sun hits a pooch with this color exactly right, one can see red tones filtering through.

There are a few different Boston Terrier coat colors to be aware of, whether you’re a current or prospective owner or simply a lover of this interesting breed. Keep reading to learn all about the Boston Terrier’s coat color variations and how coat color can affect this breed’s health.

The American Kennel Club (AKC) recognizes only Boston Terriers that feature black, brindle, and seal coats. Any Boston Terrier recognized by the AKC is required to possess white markings around the muzzle, between the eyes, and along the chest. However, dogs with additional white markings on the head, collar, forelegs, and hind legs won’t necessarily disqualify a dog from receiving AKC acknowledgment.

An overview of the official Boston Terrier colors:

Other Boston Terrier Colors to Know About

While not many Boston Terriers have vibrant red coats, many of them do sport coat colors that resemble red. This could mean a brownish reddish coat, orangish coat, or a multi-colored coat that includes shades of browns and reds.

No Boston Terrier really looks blue, but those that are grey or silver are considered to be blue dogs. And some grey and silver dogs do take on a slightly blue hue that tends to gleam in the sunlight. Many feel that blue Boston Terriers are the result of poor breeding practices over time. Still, these are beautiful dogs that are extremely popular among family households around the world.

It’s worth mentioning that almost all Boston Terriers have white markings on them. Some have just a small amount around the muzzle or between the eyes, while others feature white markings from head to toe.

Prospective Boston Terrier owners should also know that breeders can try to pass off their puppies as being brindle or seal when they really aren’t. If you’re looking to buy a show dog, it’s important to make sure that the parent dogs of the puppy that you consider adopting are AKC recognized.

But if you don’t care about whether your Boston Terrier can compete in AKC events or can’t breed other AKC-compliant dogs, you shouldn’t worry too much about the color of your new puppy unless the color could affect their health in some way, which is a possibility.

Unfortunately, Boston Terriers that have white markings on more than one-third of their body or head could breed deaf babies. Dogs with predominant white markings may even end up being deaf themselves. With that said, not all dogs of this breed will be born or become deaf just because they have a large number of white markings.

It’s always important to have a pup checked out for possible health conditions before adopting one, no matter their color. Doing so for Boston Terrier puppies that do have many white markings is even more crucial, so you can find out whether you can expect to deal with deafness and what signs to look for as time goes on.

Blue Boston Terriers are also known to have health problems such as hair loss and allergies. Luckily, these ailments are manageable and don’t necessarily mean that your greyish blue pup won’t live a long and happy life when all is said and done.

It’s true that Boston Terriers come in a wide variety of colors. Each has their own unique look, whether the AKC recognizes them or not. Every Boston Terrier has a one-of-a-kind personality. Our advice is to not judge the Boston Terrier and their markings like the AKC might. Instead, judge them on their temperament, personality, and ability to get along in a social situation.

If you want a show dog, it’s imperative to verify the lineage, credentials, health, and colors of any Boston Terrier dog that you consider adopting. Do you own a Boston Terrier? If so, what color is it? Feel free to share your experience as a Boston Terrier parent in the comment section below.

Can Dogs Suffer from Mental Illness?