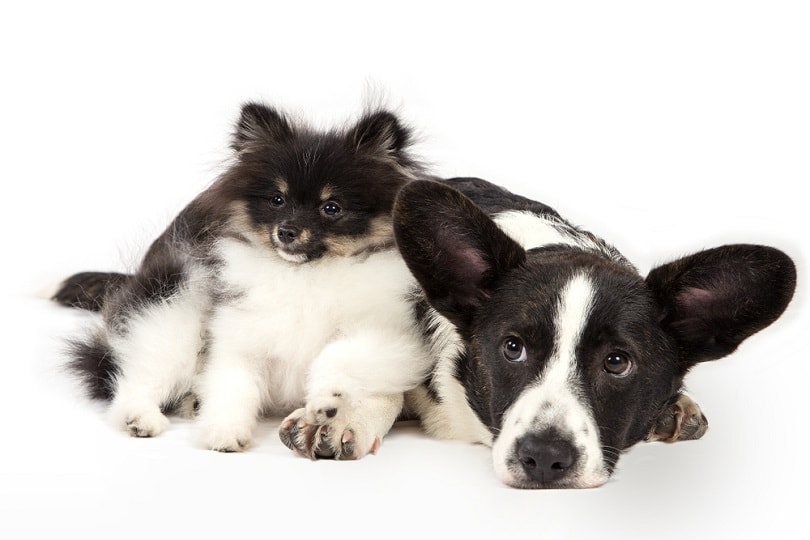 Corgis and Pomeranians are both well-known for their larger-than-life personalities, especially given their small bodies! But you may not have heard about their hybrid descendant, the Corgi Pomeranian mix.

These small yet sassy dogs combine all the best characteristics of their parent breeds into one adorable package. While you might be smitten by the adorable looks of these sweet puppies, this designer breed isn’t going to suit all families. They need plenty of training, love to bark, and can be wary of strangers.

You may not know that much about these charismatic little balls of fluff, so if the Corgi Pomeranian is on your “maybe” list and you’re ready to find out a little more about them, you’re in the right place! We’ll tell you everything that you need to know about these fiery little dogs.

Corgi Pomeranian Puppies — Before You Buy…

We’ll warn you now that Corgi Pom puppies are seriously cute. We know all puppies are cute, obviously, but these little guys are off-the-scale adorable. So, if you happen to go and view a litter of puppies before you’ve 100% made your mind up that this is the right breed for you, you might find yourself signing up for a puppy in any case!

You don’t need us to tell you that this isn’t the best idea. Corgi Poms might be small, but they’re not about to let that hold them back. These little pups can be livewires and need plenty of training and interaction to help them feel settled.

They also love to bark, so if you’re not careful, you can easily end up with an extremely vocal dog, and that probably won’t do you any favors if you live in an urban area with close neighbors. Keep reading, and we’ll go over all the points of this breed, good and bad.

As a fairly unusual mixed breed, you might need to do a little bit of research before you find a breeder who specializes in them. You should budget anywhere from $800-$1,200 for one of these little pups. It’s true that you might find them advertised for less, but you’ll need to work out if what you’re getting is a real bargain from a genuine breeder or a scam from a backyard breeder who just wants to make a profit from some poorly-bred puppies.

Make sure you ask any breeder for references, evidence of the health checks that they’ve carried out on both parent dogs, and to come and see their facilities if possible. Meeting both parent dogs can give you an idea of what kind of character that your puppy could end up with.

1. Corgis are a royal favorite.

Corgis have long been a favorite of the British monarchy, with Queen Elizabeth II having owned Pembroke Corgis since she was 7 years old and was given a puppy. Since then, she’s owned over 30 different Corgis.

2. Pomeranians are related to the Arctic Spitz.

Pomeranians are named for the Pomerania region of Europe, which used to be part of Germany but is now Polish. One of their first jobs was in Italy, where they were used to guard over their owner’s possessions and alert them to intruders with their distinctive bark.

So, you’ll never quite know what you’re going to get. If you’ve fallen in love with a friend’s Corgi Pom and are hoping to get a puppy that turns out exactly the same, then bear in mind that there’s variation in the breed, so you might get a puppy that’s very different.

The only way to be truly prepared is to make sure that you’re familiar with the temperament and appearance of both the Corgi and the Pomeranian and that you like them both. That way, however your pup turns out, you’ll be happy!

Temperament & Intelligence of the Corgi Pomeranian

Corgi Poms are smart and nothing much will get past them! They’re full of energy and action, but they can also have a strong herding instinct due to their Corgi parentage. That means smaller pets, or even children, might sometimes end up being herded around the backyard!

Corgi Poms are more vocal than most dog breeds, as one of the Pomeranian’s original purposes was to alert their owners to intruders. You can train them to bark less if you start young, but make sure this doesn’t turn into a habit, as then it will be much harder to break.

These little dogs love their families, but they can be wary of strangers. They also have a stubborn streak, which means regular and consistent training is required in order to make sure they’re happy to obey your commands rather than do their own thing.

Corgi Poms can make great family dogs, but they’re best suited to homes with slightly older kids. They can have a strong herding instinct, which is disconcerting for smaller kids if they suddenly find themselves being rounded up.

If your Corgi Pom ends up small like their Pomeranian parent, then they need careful handling. Accidentally dropping a small-breed puppy can lead to them easily getting injured, so it’s usually safest to keep them with older children who know how to handle dogs with care.

Pomeranians can snap if they feel like they’re being over-handled, so that’s something to bear in mind if you have smaller children or expect visitors. Watching out for the warning signs that your dog has had enough interaction and removing them from the situation goes a long way to preventing a scenario where they feel that they have to snap.

Corgi Poms can get along well with other dogs and cats, as long as they’re introduced with care. Some Corgi Poms will try to round up cats, so it may take a while for your cats to come to terms with that!

Slowly introducing pets to each other is best, as well as making sure they each have their own safe zone that they can retreat to if they want a bit of space from each other. Corgi Poms are playful, so they enjoy have another dog to interact with.

Things to Know When Owning a Corgi Pomeranian

Before you take the plunge and welcome that new Corgi Pom puppy into your family, here are a few more things that you need to know about these small yet bombastic dogs.

Corgi Poms will do well on a high-quality dog food that’s designed for small breed dogs. Whether you choose to feed dry kibble, wet food, or a combination of both will be up to you and depend on what your dog prefers. You could also feed them a pre-prepared or homemade raw-food diet.

They can be prone to obesity, so keep an eye on their portion size and make sure they’re getting enough exercise too. Slow-feeder bowls can be a good way to slow down the speed at which they eat their dinner, so it lasts a little longer!

Pomeranians can be prone to dental issues due to their small jaws, so make sure you brush your Corgi Pom’s teeth regularly and take them to the veterinarian for regular check-ups.

Corgi Poms might be small but they do have plenty of energy. They’ll need at least two medium-length walks per day, but due to their little legs, these don’t need to be fast!

Allowing them time to chill out in the backyard will also help, as will trips to the dog park and regular training sessions.

As a vocal breed, Corgi Poms can bark frequently, so training will help you work out strategies that you can use to keep your dog’s barking to a minimum, so they aren’t barking at every passing car.

Pomeranians can have toilet training issues due to their tiny bladders, so if your Corgi Pom puppy is on the small side, then bear in mind that this might be an issue for them too. Starting potty training your puppy early with the help of a professional trainer will give you the best chance of keeping accidents outside the house.

Pomeranians and Corgis both have dense double coats that shed all year round. Most Corgi Poms will need daily grooming sessions to keep shedding hairs in check. Twice a year, usually coinciding with the change of the seasons, your dog will probably shed much more heavily. At this time, there will be a great deal of hair absolutely everywhere!

You should never clip a Corgi Pom or any breed with a double coat. But you can take them to a groomer for the occasional session to keep those shedding hairs in check.

Most hybrid dogs will be healthier than their pedigree counterparts, as a general rule. But both Corgis and Pomeranians can suffer from a range of health conditions, any of which could be inherited by a Corgi Pom puppy. It’s always a good idea to speak to any breeder about the health checks that they carry out on the dogs that they use for breeding.

Perhaps you’re totally smitten with the idea of adding a Corgi Pom to your family, and the only question left to answer is whether you get a male or female puppy. While you might think that you’d prefer one over the other, we’d definitely recommend waiting until you’ve met the puppies that you’re interested in.

A puppy’s personality won’t be dependent on their sex, so if you were imagining choosing an outgoing female puppy, you might meet the litter only to discover that all the females are shy and the male pups are climbing all over you. It’s always best to pick the puppy whose character appeals to you the most and consider their sex as a secondary concern.

Any hormonal issues that you might be worried about will usually be eliminated when you get your puppy spayed or neutered.

The Corgi Pom is a small and vivacious breed that can easily keep their owners entertained due to their energy and mischievous antics. They can be vocal, stubborn, and wary of strangers, so be prepared to put in serious training hours when your puppy is small. Working with a qualified trainer can help you control all these habits, while also allowing you to enjoy bonding with your puppy.

Corgi Poms are affectionate, extremely loyal, and full of energy. They can suit active homes with slightly older children. If you think that you’ve got what it takes to own one of these little pups, then they will provide endless entertainment and companionship.