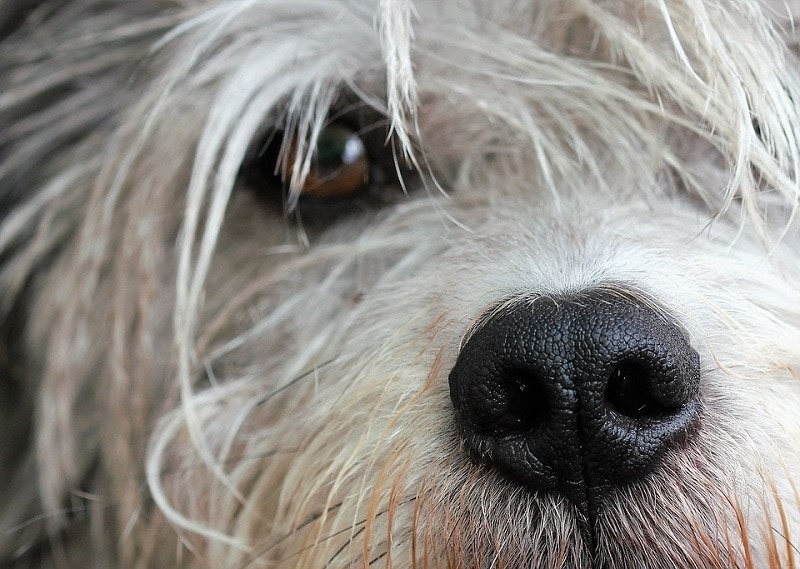 You’ve noticed that your poor pup seems to be losing hair from around his eyes, and you’re probably wondering if it’s something you should worry about. There are a number of conditions behind this problem, and while some are not serious, in many cases, there could be an underlying problem that should be checked by your vet.

Most of the problems might be based around minor conditions such as allergies or fleas, but they might also stem from an infection or an issue with the eye itself. If you’re unable to pinpoint the problem or it appears to be originating from a serious health condition, take your dog to your vet as soon as possible.

These are the 9 reasons why your dog might be losing hair from around his eyes and how you should handle it:

Why Is My Dog Losing Hair Around His Eyes

There are a number of allergies that can affect dogs and cause itchy and irritated skin. Particularly around the mucous membranes on his face such as the mouth, ears, nose, and particularly the eyes. If your dog’s eyes are watery and red and accompanied by sneezing and a runny nose, he might be allergic to something in his environment (such as pollen, dust, or his food). If your dog is rubbing at his eyes with the carpet or his paws, this can cause hair loss around his eyes.

Atopic dermatitis commonly occurs with environmental allergies and has the following symptoms:

It most commonly affects the eyes, ears, belly, feet, base of the tail, groin, armpits, and muzzle.

The following are some of the courses of treatment your vet may prescribe:

If your dog contracts conjunctivitis, or pink eye, it is quite possible he will rub some of the hair away from around his eyes with his paws. You can read more about how your dog may have gotten pink eye here.

Some of the symptoms of pink eye include:

All dogs have a colony of tiny mites that permanently live on your dog’s skin, but if the number of mites increases, it can cause hair loss, sores, and skin infections.

Fleas are tiny brown parasites that can create irritation or even allergic reactions through their bites and saliva. They are usually more commonly located at the base of your dog’s ears and tail but can be found almost anywhere on your dog. You can generally tell if your dog is suffering from fleas with their excessive scratching, and if you look through their fur, you’ll see them moving. You can also look for tiny black pepper-like bits, which are flea droppings.

Glaucoma is a very serious condition that, if left untreated, can cause blindness. It’s a condition that places pressure on an eye and will cause improper drainage of the fluids in the eye. In some cases, the dog may rub at his eye since the condition can be painful, which could lead to hair loss in that area.

Some of the symptoms of glaucoma include:

There a number of infections that can be caused by parasites (fleas, ticks, and mites), as well as by fungal and bacterial problems. Any of these can cause skin irritation, which can be exacerbated by your dog rubbing at his eyes. There are also infections of the hair follicles such as vesiculopustular dermatoses.

8. Object or Injury to Eye

There is always the possibility that a foreign body might be caught in your dog’s eye, and his rubbing and pawing in this area is in response to discomfort or pain. This can create bald spots around the eye but could also further damage it. If you suspect there’s an injury to the eye, take your dog to the vet immediately.

Ringworm does not involve a worm, thank goodness, but it is a fungal infection that is highly contagious to animals and humans.

Some of the symptoms may include:

If your dog has been losing hair around his eyes, it could indicate that he might have a serious health condition, and taking him to your vet is the best course of action. Once you’ve treated the underlying health issue, the hair should grow back, and your pup will be as adorable and, most importantly, as healthy as ever.

My Dog Ate Fertilizer! Here’s What to Do (Our Vet Answers)