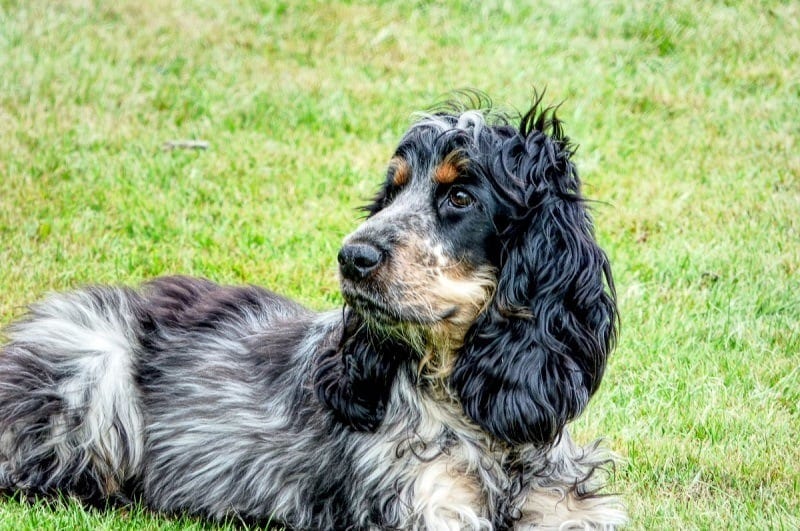 The name of the breed suggests a generalist, which is true to the Field Spaniel’s origins. Selective breeding fine-tunes different dogs to hone the skills necessary to go after a particular prey species. Anyone who hunts knows that there are specific duties for their companions, whether they are scent hounds, flushing dogs, or retrievers. Each one requires a particular skill set with different prey.

The Field Spaniel joined the ranks of the American Kennel Club (AKC) in 1894. However, its popularity waned until it nearly became extinct.  Other breeders developed specialized dogs that eventually replaced this pooch in the field. Today’s pups come from only four canines from England back in the 1950s through the 1960s.

The Field Spaniel is a friendly dog that is as eager to please as he is easy to train. He also is a relatively healthy pup with few significant health concerns. He is an excellent choice for families because he’s so playful and kid-friendly. While the breed has changed in recent years, the Field Spaniel is as lovable as ever and will make a faithful companion.

Field Spaniel Puppies – Before You Buy…

It’s essential to research a breed thoroughly before you decide on one. Enthusiasts selectively breed dogs for particular characteristics that may or may not fit your lifestyle. They are somewhat malleable with training and socialization, but some things are also genetic. The fact that the Field Spaniel is a gun dog provides several clues about the temperament of this pup.

He is energetic since that serves him well in the field. This pooch is also somewhat dog-friendly from his time working with other canines while hunting. On the other hand, the Field Spaniel has a keen prey drive. If he sees an animal running from him, he’ll chase it. He’s a dedicated hunter, which means he has a strong wanderlust potential.

The Field Spaniel is a good size that won’t overwhelm the kids. He has enough energy to keep up with them, too. While he is reserved with strangers, he is affectionate with his family. This breed gets very attached and may suffer from separation anxiety if left alone too often. He’ll do best in a home where he can get plenty of attention, preferably with a fenced-in yard.

The primary challenge you’ll have with getting a Field Spaniel puppy is not the cost. You can expect to pay about $800 or more for a pup from a superior bloodline. The main obstacle you’ll meet is finding one. This dog is relatively rare in the United States. We recommend only buying your pet from a reputable breeder who has done the necessary pre-breeding health screenings.

Avoid purchasing a dog from so-called puppy mills or pet stores. If the price sounds too low, there’s probably a reason. If possible, ask to see the sire and dam. However, sometimes, a breeder may only have the female on-site. Some individuals take their dogs to other breeders. The most important thing is that you get a healthy puppy.

That means that you shouldn’t get a pet that is younger than 12 weeks. He needs the time with his littermates and mother to hone his socialization skills and get strong enough to handle the stress of going to a new home. Make sure that he is up-to-date on all his vaccinations and deworming. This preventive health care is imperative.

You should also consider the cost of owning a pet as part of your research. You can easily spend $1,000 or more on food and other necessities annually. Bear in mind that your first year of dog ownership is likely the most expensive one, especially if you opt to spay or neuter your pup.

1. The defining trait of the Field Spaniel is his hunting ability.

It’s essential to remember that many breeds got their start for a particular job. The Field Spaniel is no exception. He is the Swiss Army Knife of gun dogs. He could work both land and water, doing his task as a retriever. It’s only when these duties became specialized that this workhorse faded into the background. His AKC recognition put this pup on the radar for many now enthusiasts.

The selective breeding of the Field Spaniel is a classic example of fine-tuning a breed for desirable traits. This pup gets his characteristics and temperament from a mix of the Sussex Spaniel, English Springer Spaniel, and the Cocker Spaniel. You can probably recognize a bit of all of them in your pet. It’s part of what makes him so versatile for many kinds of hunting.

3. The temperament of the Field Spaniel is an important feature of his breed standard.

The breed standards for dogs usually include a blurb about the pup’s temperament. The official regulations for the Field Spaniel provide vital clues about his personality. The Field Spaniel is described as having “a noble carriage…with a great affinity for human companionship.”

Temperament & Intelligence of the Field Spaniel

Keen intelligence is a hallmark of hunting dogs. The Field Spaniel is no exception. He develops problem-solving skills when trying to locate his prey. He learns to be alert and aware of his surroundings. These pups also have an independent streak, the result of their decision-making.  It also explains why some pets seem reserved. It’s merely the result of his background.

The Field Spaniel is probably one of the most docile dogs you’ll ever meet. He doesn’t try to charm you. He just acts himself as the sweet pup that he is. While he focuses on the hunt, he isn’t overly intense about it. However, his instincts keep him on the job. He isn’t as vocal as some field dogs. Nonetheless, this pup has a moderate tendency to be nippy that you’ll need to control early.

The Field Spaniel will make a delightful addition to your home, whether or not you have children. He is affectionate with his family and will show his love freely. Attention is vital with this pooch. He won’t like being in a crate all day while you work. He thrives on human companionship. We think that it’s an essential factor to note since the fit for the pet and owner hinges on it.

Gun dogs often have contact with other pups, which gives them a heads-up when getting along with other pets in your household. We can’t say the same thing about different animals. Cats and small mammals are prey species in the eyes of your Field Spaniel. If they run from him, he’ll chase them and make their lives hell.

Things to Know When Owning a Field Spaniel:

The Field Spaniel is relatively laid-back. However, there are a few caveats that are worth mentioning to make your relationship with your pup a beautiful one. We’ve touched on a few of the obvious ones, such as his prey drive and wanderlust potential. Often, these things are in the dealbreaker category, deservingly so. Let’s delve deeper into other factors that can affect how well he fits into your home.

The Field Spaniel is a medium-sized dog that needs a high-quality diet formulated for these pets. This pup is very food-motivated and, thus, is prone to weight gain. Therefore, it’s essential to monitor his body condition closely. That means no table scraps and limiting treats to no more than 10% of his total daily intake. We suggest reserving them as training aids.

We also recommend choosing a food that contains a minimum of 18% protein and 5% fat, in keeping with the Association of American Feed Control Officials’ (AAFCO) nutritional profiles. This pup has such a gorgeous coat that it would be a shame not to give your pet the best diet possible. You can feed your puppy three to four times a day and cut back to two meals when he is an adult.

As is the case with other hunting dogs, the Field Spaniel needs daily exercise to keep him physically and mentally fit. Daily walks are an excellent way to reinforce his social skills and leash manners. Early socialization will ensure that he’ll play nice at the doggie park. However, he is not a pet that will do well in a crate all day or tied up outside.

The Field Spaniel is an intelligent dog that is willing and able to learn things quickly. Consistency works best for getting him to obey your commands. It’s also an excellent way to build trust and loyalty. This pup isn’t the best choice for novice breeders. He’ll do best with an owner that has experience handling dogs and setting the proper expectations.

The Field Spaniel requires regular brushing to keep his coat looking its best. You should also trim the hair on his paws, muzzle, and ears to control mats. It’s also a smart idea to check his ears for any signs of infection. He does shed year-round, so the time you take for grooming will cut down on your vacuuming. We recommend starting him earlier since you must make it a routine with him.

One advantage of being a relatively rare dog is that there are fewer problems from overbreeding. However, the Field Spaniel is vulnerable to some congenital conditions that plague pups of his size. That’s one reason we stress the importance of only buying from breeders who do the recommended health screenings.

Male and female Field Spaniels are similar in size, making that consideration a moot point. Either sex will be a welcome addition to your home. We suggest that you discuss spaying or neutering with your veterinarian if you choose not to breed your pet. The general rule of thumb is to wait until the dog has reached sexual maturity.

The Field Spaniel brings a lot to the table for someone looking for an active pet with plenty of love to share. Hunters will find a reliable and steadfast companion in the field that can handle the rigors of tracking game. While he has some bad habits, they are easily corrected with early training and socialization. The dog world is fortunate that enthusiasts saved this pup from extinction.

15 Small Dogs That are Good With Children