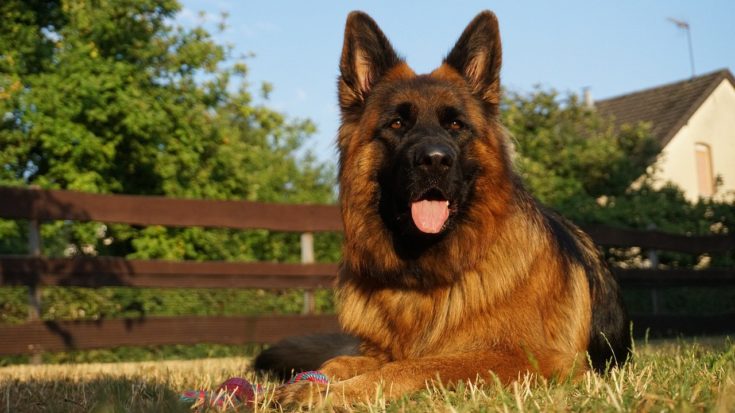 German Shepherds are very loyal and loveable dogs, and they’re well known for their love of their owners, their protective nature, and their lively personality. They’re extremely alert, so they make great guard dogs, and their high intelligence means they know what to consider a true threat. On top of all of these desirable traits, they’re affectionate, great with kids, and get along with other pets. What more could you ask for in a pup?

When you picture a German Shepherd you probably envision a black and tan coat, and you may not know that these amazing canines come in a variety of stunning and beautiful colors!

Let’s take a look at 12 recognized German Shepherd colorations and talk about the differences in each.

All German Shepherds will be a variation or mix of these main colors:

The 12 Different Colors of German Shepherds Are:

Believe it or not, the black and tan coloration that is so common in German Shepherds is actually determined by a recessive trait – it just happens to be a very pervasive one in this breed. Perhaps because it is so common, it is the coat most commonly seen in dog shows as well.

The shade of tan can vary quite a bit, and, as you’ll see shortly, the natural variation actually leads to what are considered different colored German Shepherds.

The main difference is the shade of “tan” on these dogs. This is one example of an extreme shade shift that leads to what is perceived as a different colored dog. In actuality, these Shepherds have the same genes as their black and tan relatives. The only difference is that their tan fur presents as a much lighter cream color.

The silver German Shepherd has a coat that appears silvery or light grey. They often have the same color pattern as the previous entries on our list with a black saddle and black face markings, but elsewhere these rarer Shepherds can vary quite a bit.

The former will simply have a lighter, silvery looking coat where there would normally be tan. The latter will have more sporadic and random patches of silvery fur amongst black markings.

Remember when we said the common black and tan coloration on the German Shepherd was recessive? Well, the dominant gene leads to the sable Shepherd!

These dogs have a more random, unpredictable coat coloring due to their black-tipped fur. They often have streaks of tan coloration among large patches of black. They still often have black coloring around their muzzles, but the instantly recognizable black saddle usually doesn’t appear on this color variation.

Probably the second most common color pattern on German Shepherds, the black and red combination is very striking and stands out quite a bit.

These dogs have the same color pattern as the black and tan Shepherds because they are genetically identical to them. This is another example of an extreme difference in coat shade leading to a “new” coloration.

On the black and red Shepherd, you can expect to see a very dark tan fur that appears reddish on the chest, much of the head and neck, the underbelly, and most of the tail.

The red color mixed with the black is often seen on show dogs, while the aforementioned cream color isn’t – this may be because of how strong and noticeable the red fur can appear.

Blue German Shepherds are rather rare, as the coloration is considered a “fault” in terms of breeding standards. The rare gene that leads to the blueish look is recessive, so both parents must carry the gene to produce blue offspring.

Except for this recessive blue gene, these dogs have the same genetic makeup as other Shepherds. No additional health issues are present in blue Shepherds, but because this is considered a faulty coloration, they aren’t used in dog shows or competitions.

Liver coloration in German Shepherds is exceptionally rare, and it presents as a single-color coat that is a very deep brown, similar to the almost reddish color of a liver.

This is another very striking color, but, like the blue coloration mentioned above, it’s considered a “fault” in terms of breeding standard. Because of this, most breeders don’t try to select for it.

It’s possible for the tan in a bi-color German Shepherd to be cream-colored or reddish, which could be considered additional colorations.

White German Shepherds have a stunning, entirely white coat. This coloration is due to a recessive gene just like in the blue color above, so it doesn’t appear often.

Breeders don’t often select for this color fur in the Shepherd, possibly because it isn’t recognized by competitions or dog shows.

Just like with entirely white Shepherds, the entirely black coat on a black Shepherd is a result of a recessive gene. Both parents must carry this gene and pass it onto their offspring, so this color is just as rare as white and blue in this breed.

Unlike the bi-colored versions of these dogs, black German Shepherds are entirely black, including all of their fur and their noses.

The gray German Shepherd owes its beautiful, dusty coat to a dominant gene that leads to a fairly dark grey coloration. These dogs are born with stunning blue eyes that change to a light or dark brown as the pup ages.

Although confused with blue and black German Shepherds, these dogs are genetically different, as their dominant gene – and not a recessive one – leads to their coat coloring.

Likely the rarest coloration in German Shepherds, the panda pattern exhibits the common black and tan colors with heavy white spotting. The result somewhat resembles the pattern you would find on a panda, and it’s as adorable as it is striking.

The German Shepherd is a very recognizable dog due to their medium-to-long double coat, their perked-up ears, their bushy tails, and their forward and aggressive stance. The common coloration is tan with a black “saddle” and black muzzle. They have large paws and ever-present alertness in their expression.

They are considered medium-to-large dogs, as they average around 25 inches tall and weigh in between fifty and ninety pounds depending on gender. Their presence is also much larger than their physical appearance, and it’s hard not to notice these dogs given their power and attentive stance.

German Shepherds are ranked by the American Kennel Club as the second most popular dog in America, and for good reason. These dogs are extremely loyal, great with children, affectionate toward their owners and familiar faces, and protective of their homes and their families.

They are energetic and hardworking, but at the end of the day they’ll be happy relaxing and interacting with you or your family members. They thrive on human interaction and direction, they’re highly obedient if trained properly, and they’re intelligent and affectionate. They are the full package!

Regardless of the color of your German Shepherd, your grooming process will be very similar, so don’t think that choosing a specific color will help cut down on shedding!

These dogs have a long and fairly dense double coat, which means they do shed a lot. To keep your pup’s coat healthy, you should plan to brush them with a wire brush two to three times a week. This will help spread natural skin oils and also cut down on matting, tangling, and shedding. You won’t avoid shedding altogether, so be prepared to do routine cleaning around the house in addition to regular brushing.

You should bathe your Shepherd about once a month or once every six weeks. Bathing more often can deplete those natural oils and lead to dry skin and irritation.

Given how common the black and tan coloration is, you may be surprised that German Shepherds come in so many colors! No matter which color pattern you choose, rest assured that your dog will be equally as healthy as all the others, and you’ll be taking home an extremely loyal, protective, and obedient dog who makes a wonderful family pet.

Dog Sprayed by a Skunk? Here’s What to Do! (Vet Answer)