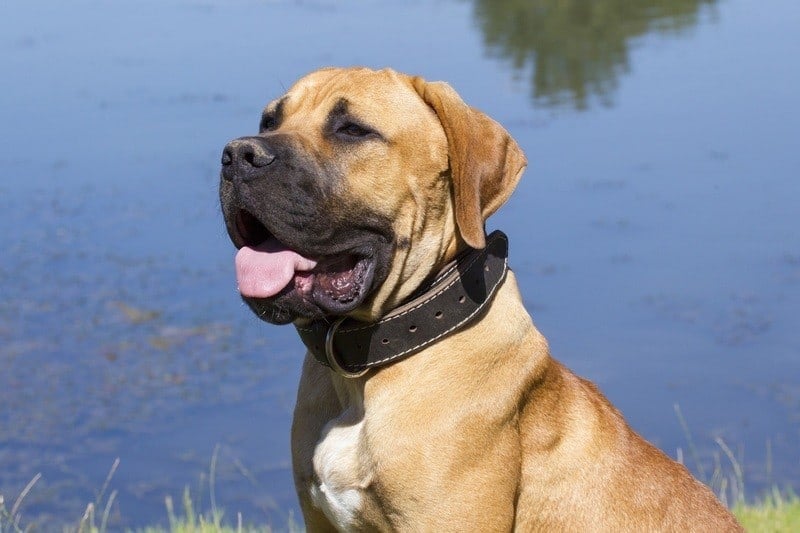 The Golden Bullmastiff Retriever seems like a natural choice. There is more to adore about the lovable Golden Retriever with the bulk of the Bullmastiff. It’s an interesting mix that brings a UK connection together. Both parent breeds contribute some desirable qualities to the hybrid. Gentle is the operative word with this giant pooch. This pup defines friendliness.

Both parent breeds have their origins in the mid 1800s. Both had specific jobs that benefited their owners. The Golden Retriever became the perfect gundog. His name tells you what you need to know. However, this dog is also a handsome canine That accounts for his popularity. Did we mention the puppies? How can anyone resist a baby Golden Retriever?

The Bullmastiff combines the best qualities of the Mastiff and Bulldog. His role was a guardian over the grounds of the estate, which his size and looks provided the goods. His bulk belies the fact that he can move silently through the woods to do his job under the cover of night. The Bullmastiff is a fearless pooch that works alone in sometimes dangerous conditions.

The size of the Golden Bullmastiff Retriever tells you a lot of what you can expect from this pooch. He is big, very big. That means you must have the space to give him enough exercise. It also means that he is more expensive to own because of your higher food costs. That makes owning this pup more of a financial commitment than a smaller dog.

The Golden Bullmastiff Retriever brings a lot of the best qualities of the parent breeds together in an adorable package. The Bullmastiff in him tames the high energy of the Golden. Despite his size, this dog is quite friendly, albeit a bit aloof with strangers. That’s the guard dog in him. As is the case with many large canines, this pup isn’t long-lived. It’s a vital consideration if you have children.

On the one hand, you have a dog that is the third most popular breed with the Golden Retriever, according to the American Kennel Club (AKC). On the other is the Bullmastiff that doesn’t have the same following at 51st. That brings two factors to the table. You will have competition for a puppy with a pooch that you may have trouble finding.

You can expect to pay at least $1,200 and perhaps north of $2,000 for a Golden Bullmastiff Retriever, depending on the lineage of the parent breeds. We urge you only to buy from sellers who have done the recommended health screenings. Both parent breeds are susceptible to several congenital conditions that can significantly affect the pup’s lifespan and quality of life, to say nothing of your feelings.

Puppy mills are another concern. Telltales signs of a less-than-reputable dealer include refusal to allow you to view their facilities, uber-low prices, and puppies less than 8 weeks old for sale. Never get a dog that young, especially with a larger pooch like the Golden Bullmastiff Retriever. These dogs mature more slowly than smaller breeds.

Of course, the price of the puppy is only the beginning. The first year is likely the most expensive. Many breeders make spaying or neutering a pet a consideration of the sale. Then, there are the vaccinations, food, and naturally, toys and treats—and lots of them! You can plan on spending at least $1,381 a year. A large dog like the Golden Bullmastiff Retriever will likely cost more because of the higher food budget.

1. Gamekeepers on estates and the Bullmastiff share a common goal.

Poaching was—and still is—a significant problem for managing wildlife populations. Gamekeepers in England had an ace in the hole. The Bullmastiff proved a formidable guard dog to discourage this illegal activity. Selective breeding helped develop a dog that could handle the job.

2. The Golden Retriever has its roots in Scotland.

The UK connection is evident with the origins of the Golden Retriever. While the Bullmastiff claimed England, this pup got its start in Scotland. Lord Tweedmouth, aka Dudley Marjoribanks, refined the selective breeding to create the ideal dog for life among the aristocracy.

3. A myth, later debunked, had the Golden Retriever joining the circus.

The history of many breeds often includes a mix of fact and fiction. The latter, in the case of the Golden Retriever, concerned the dog’s connection to the circus, the Russian circus. There is a connection to this country, but it was with the greatest show on Earth. The origins of the two canine lines had different paths, even though similarities exist.

The Golden Bullmastiff Retriever is a sweetheart of a dog. He is an affectionate and loyal companion to everyone in the family. He is intelligent, but there is also the independence of the Bullmastiff. That pup also has a relatively high propensity toward barking that you must control early. The Golden Retriever also tends to nip as a puppy, which requires equal attention.

For the right family, the Golden Bullmastiff Retriever is an excellent choice. His friendly, happy-go-lucky personality will make him a welcome addition to your home. He will do best with older children because of his large size. He’s playful enough to keep up with the kids, but he may overwhelm the wee ones with his energy and intensity.

Both parent breeds enjoy the company of other dogs. The concern again goes back to the size of the Golden Bullmastiff Retriever. This pup has a moderate prey drive that a fleeing cat may trigger into action. We’d suggest having this pup in a one-canine household with no other pets to play it safe. It’s worth noting that being docile is part of the breed standard for both parents.

Things to Know When Owning a Golden Bullmastiff Retriever:

If you’ve made it this far, it’s time to delve into the specifics of owning a Golden Bullmastiff Retriever. Bringing a pet into your home is a serious responsibility, especially with a pooch this big and strong. We can’t emphasize enough how imperative early socialization and training are for this dog or any pet. However, that only scratches the surface of this lovable pooch.

Food is a vital consideration when dealing with a dog like the Golden Bullmastiff Retriever. If the Bullmastiff is the dominant breed, you’ll likely be feeding this pup over 5 cups or more of food a day. That will certainly add up over time. It’s essential to provide him a diet meant for giant breeds. The formulation of these products is more in line with the metabolism of these canines.

Surprisingly, both parent breeds of the Golden Bullmastiff Retriever are prone to gaining weight. Therefore, you should monitor his intake and activity level to adjust how much you give accordingly. An obese pet has a reduced quality of life and often a shorter lifespan due to other health impacts. That’s a major concern with a pup that doesn’t live as long as other pets already.

The playful nature will make keeping your Golden Bullmastiff Retriever active easier. We suggest daily walks to keep him mentally stimulated and to reinforce those socialization skills. Of course, it’s more manageable if you’ve leash trained him as a puppy. This pooch takes his play seriously, so be ready for it. Luckily, he doesn’t have a strong wanderlust potential, which will help.

It’s imperative to take early control of training and asserting yourself as the boss from the get-go. The intelligence of the Golden Bullmastiff Retriever is a plus for learning new commands. Despite his size, this pup has a sensitive side. Stick with positive reinforcement and avoid harsh reprimands. This pooch is eager to please and willing to do it. Treats make an excellent training aid for this food-motivated pet.

The degree of grooming and the amount of work it is depends on which parent breed is dominant in the mix. Both shed seasonally. You can control how much you must vacuum with frequent brushing. It’ll also give you a chance to monitor the condition of his coat. We also suggest checking his ears occasionally and keeping his nails trimmed, especially if he doesn’t walk on the pavement a lot.

The popularity of a breed sometimes works against them. It can encourage puppy mills and overbreeding. It also increases the risk of congenital issues. The main concerns for the Golden Bullmastiff Retriever are in joint and skeletal system development. We strongly urge you only to get a pup that has received the recommended health screenings before you fall in love and buy a pet.

The size difference between a male and female of a Golden Bullmastiff Retriever is often significant, even a dealbreaker in a lot ofcases. Either sex is a loving pooch that will bring joy to your home. However, if the size is a concern, stick with a female. Bear in mind that the cost of spaying is higher than neutering a male with a longer recovery period.

The Golden Bullmastiff Retriever is a whole lot of loving. This pup is affectionate to a fault. He adores his family and will show it lavishly. This pooch is a commitment in many ways, with his big appetite and his shorter lifespan. However, if you have space and energy, you can’t go wrong with this one. His playfulness and laid-back personality are an ideal combination for the right individual or family.