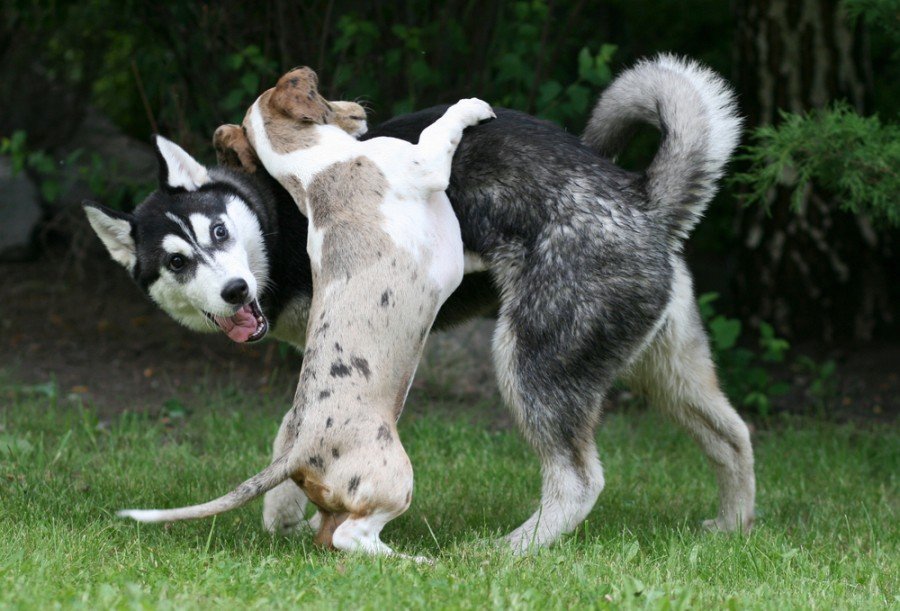 The Dusky is a designer dog that is the result of breeding a purebred Siberian Husky with a purebred Dachshund. The result is a dog that can vary greatly in both size and looks, depending upon which of their parents they most take after.

Duskies are not one of the more popular hybrid designer breeds; however, those who own them tend to describe their dogs as friendly, energetic, and at times, a little stubborn.

The breed is known to have a few health problems that relate to their joints, which tend to be more of an issue in dogs that have inherited the larger body size of a Husky and the short legs of a Dachshund.

Dusky Puppies — Before You Buy…

Due to the obvious physical differences between the Siberian Husky and the Dachshund, the Dusky is quite an unusual breed combination. Hence, before buying a Dusky puppy, it is important to understand that they can come in quite a variety of looks and sizes, and even the difference between individual dogs in the same litter can be quite significant.

Dachshunds come in three different sizes: toy, miniature, and standard. You should check with your breeder as to which type of Dachshund they have used, as this can further influence the appearance of your puppy.

In all likelihood, your Dusky puppy will be shorter than an average Siberian Husky and may also weigh considerably less, yet this shouldn’t fool you into thinking that the Dusky would be a good dog for an apartment. Both the Siberian Husky and the Dachshund are active dogs, and as such, even a small Dusky will need plenty of space in which to run around and play.

What’s the Price of Dusky Puppies?

Dusky puppies can range in price from $1,000 to $1,500, with the exact amount varying according to the popularity of the breed and their availability in your area.

Regardless of the price of your Dusky puppy, it is important to take the time to select a responsible breeder who will let you visit their kennels and meet the puppies before you commit to buying one. Visiting and inspecting the kennel gives you a chance to see how your new pet interacts with the other dogs in their litter, which will provide you with insight into their personality and provide reassurance that your Dachshund Husky Mix puppy is coming from a breeder who looks after their dogs.

1. The Dusky is a dog that likes to dig.

All puppies can be a bit boisterous from time to time, and there isn’t likely to be too many dog owners that haven’t had the odd bit of lawn dug up or slipper destroyed. Yet, when it comes to the Dusky, you should be prepared for a few craters to be created in your yard — these dogs really like to dig.

2. Duskies can be a little aggressive.

The Siberian Husky is a dog that is known to have a high prey drive, and the Dachshund can sometimes be a bit snappy. As a result, depending upon the temperament they inherit, the Dusky can be aggressive toward smaller animals and other dogs.

To avoid this problem, owners should ensure that their pets start socialization and obedience training at a young age.

3. Duskies tend to bond well with the whole family.

Temperament & Intelligence of the Dusky

Both the Siberian Husky and the Dachshund are intelligent dogs, so it should come as no surprise that the Dusky is no slouch when it comes to pure intelligence. However, they can also be quite stubborn, which can make obedience training a little tricky.

Duskies can also be quick to pick up on the things that individual family members allow them to get away with and will often adapt their behavior to suit different family members. For example, if one family member is happy to let them sit on the couch, they will do so when that person is at home. Yet, they will not attempt to jump up on the same couch in front of a family member whom they know disapproves of this behavior.

The Dusky is also a loving and loyal companion who adores spending time with the people in their life. They may be content to play outside for a few hours alone during the day, but at night, you will find that they crave attention and will want to be inside the house with their family.

The Dachshund Husky Mix can be quite wary of strangers, and although they are unlikely to attack an intruder, they will bark to let their owners know that there is a problem, and in this way, they can be good watchdogs.

Yes, the Dusky is a dog that craves the attention of their family and will get along with everyone in the house. They are quite active dogs and will enjoy time in the yard running around with kids.

They may not be the best dogs for families of young children. Duskies don’t typically take well to rough play or to being poked and prodded, and they can get a little snappy if they’ve had enough of this sort of attention from young children.

How well a Dusky gets on well with other pets is something that varies from dog to dog. Some Duskies have no problem at all, yet others tend to chase smaller animals and may not like other dogs. It really comes down to the traits that each dog inherits from their parents and which they take after more in terms of their temperament.

As with many dogs, Duskies don’t tend to have too many issues with other animals if they are raised together, but a problem can arise when a new pet is introduced into your house at a later time.

Things to Know When Owning a Dusky

Duskies can be great family pets and companion dogs. Yet, like all pets, Duskies will require a certain amount of care and attention throughout their lives.

All dogs need to be fed a well-balanced and nutritious diet that is tailored to suit their age, size, and energy levels. In this regard, the Dusky is no different.

When it comes to choosing a dog food, we recommend that you find a high-quality dry dog food that has been specifically formulated for either an active small or medium dog (depending upon the size of your Dusky).

They are quite a few different brands to choose from, and it is best to find out from your breeder which brand of food that they have been feeding your dog, and if possible, continue feeding your dog that food in the short term. If, after a while, you wish to change brands, it is best to start by mixing a bit of the new food in with your dog’s current diet and over the course of a couple of weeks, slowly increasing the ratio of new to old food. In that way, you will avoid having any issues with your Dachshund Husky Mix refusing to eat the new food you wish to give them.

Given that Duskies often have quite short legs, they don’t tend to be the sort of dog that you can take out for a long run. However, as the breed tends to gain weight easily if they don’t get sufficient exercise, Duskies still need a long walk and about an hour of playtime each day to keep them healthy.

The Dusky is quite an intelligent dog and they are reasonably easy to train. Yet, as the breed is known to have a mind of their own and can be quite stubborn, it will be necessary to keep them interested in their training if you are going to have any success.

The key is to make their training as much of a game as possible. If a Dusky is having fun and the game is changed often enough to keep their interest, they will want to keep playing and learning new things. It is also important that you reinforce and praise positive behaviors rather than getting angry or scolding them when they get things wrong, as a Dusky will simply refuse to cooperate if they believe that the game is going to end with them being scolded.

Given that the Husky has a thick double coat, it is highly likely that your Dusky will shed regularly and may, depending upon their coat, molt at the beginning of summer and again at the start of winter. As such, Duskies need moderate to regular brushing and bathing.

If your Dusky has floppy ears of the Dachshund, they may be prone to ear infections, so you will need to ensure that their ears are clean and free from any dirt. Duskies also need to have their nails clipped regularly and will benefit from having their teeth brushed with canine toothpaste.

Duskies can, depending upon their body type, be prone to several problems with their joints, which is something that is of particular concern with dogs that inherit short stumpy legs like a Dachshund’s and a larger Siberian Husky-sized body.

The breed, as with many dogs with Dachshund ancestry, can also be more prone to severe and painful back problems.

Common health issues that the breed can face include the following.

There is not a great deal of difference between male and female Duskies in terms of either size or temperament. Rather, the main differences that you will notice among dogs of this breed relate more to which parent breed they take after.

As such, we recommend that unless you have a particular preference for either a male or female dog, you are far better off selecting your puppy based on their general appearance, coat type, and the temperament that they display.

The Dusky isn’t going to be a dog for everyone. They can have a bit of an unusual appearance, and it can be difficult to predict whether their temperament is going to be more like a Husky or a Dachshund.

However, if you are willing to put in a bit of effort and you like their appearance, they can make good dogs for a family or those looking for a loyal companion.