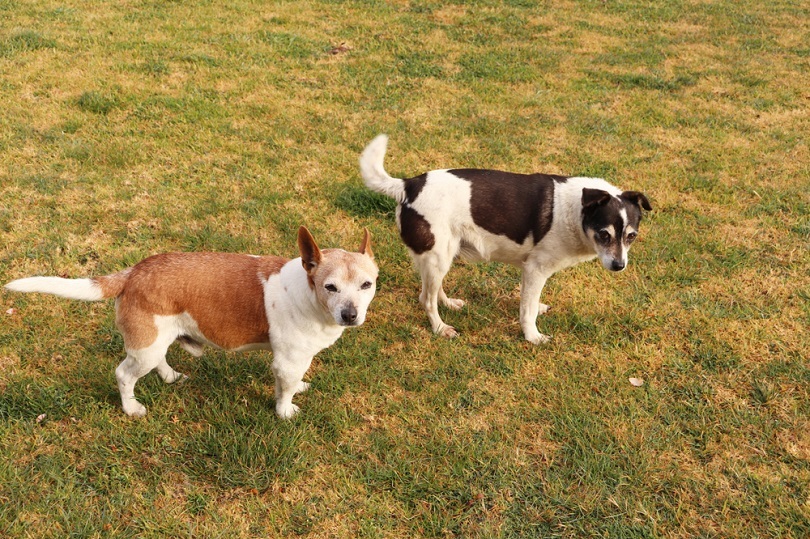 As the offspring of a Mini Fox Terrier and Jack Russell Terrier, the Mini Foxy Russell is a spritely little dog that is full of curiosity and love. They were originally born and bred to hunt, like most Terriers are. Because their parents are so similar in nature, it’s easy to predict how this crossbreed will behave as they age. These dogs are agile, curious, and happy-go-lucky. They tend to go with the flow and accept anyone who is spending time around them.

The Mini Foxy Russell typically has a white body with brown or red marking on the head, back, chest, and/or legs. However, they can feature shades of black and tan somewhere on their bodies in addition to their base colors. Their bodies are square and their heads typically boxy, although variation should be expected.

These dogs love to play and will happily spend all day in the yard with kids or other dogs. They also love snuggle time on the couch or in the bed when they’re allowed to indulge. They can be trained to hunt small animals or to perform on the agility course. But they can simply be an awesome family pet that the whole family is sure to enjoy spending time with. Want to know all there is to know about the Mini Foxy Russell? We have you covered!

Bringing a new Mini Foxy Russell puppy home for the first time is an exciting experience. But you should know exactly what you are getting into as an owner of this crossbreed before deciding whether to adopt one. Here are a few basics to start with:

Luckily, a Mini foxy Russell puppy won’t cost you an arm and a leg. You can expect to spend anywhere from $300 to about $1,000 for one, depending on their lineage and the health conditions of their parents. In addition to making sure that a new puppy’s parents are really the breeds that they should be, it is important to ensure that the breeder’s facility is clean and reliable and puts the care of their puppies above all else.

If the breeding facility is dirty and the puppies and parents aren’t well taken care of, they don’t deserve your investment for a couple of reasons. First, there’s a good chance that the facility is a puppy mill and the puppies bred there will have health problems as they age. Second, giving your money to such a facility will support their poor practices and encourage its continuance.

1. They Are Big Players

These dogs may be little in size, but they have big appetites when it comes to playing. They will turn any situation into a game if they’re allowed to. Even snuggle time could turn into a nibble session.

2. They Love Having Their Tummies Rubbed

Start rubbing just about any Mini Foxy Russell’s belly, and they will likely roll right over and “play dead” for the entire duration that you’re willing to rub them. They can’t seem to resist this form of affection from humans!

3. They Are Protective of Their Family Members

Although they are small, Mini Foxy Russells are extremely loyal to their family members and will protect them at all costs. They’ll bark when someone or something enters their property without permission, and they will become aggressive if necessary.

The Mini Foxy Russell is a high-energy mixed breed that thrives in active environments. They can happily live on farms and work as hunters to keep rodents and other small pests away. However, they can be just as happy in a family home setting, whether that is an apartment or a house with a yard. If living in an apartment, these dogs need multiple daily walks and/or the opportunity to play and run at the park regularly.

These dogs can be quite stubborn, which can make handling tough for inexperienced dog owners. They enjoy the company of people, even strangers who are friendly to them. However, they will alert you when someone is making their way to the front door, stranger or not. They are smart and curious, making for a mischievous personality that will get into trouble when left to their own devices for too long. They may growl or nip at young children who tease them, so they should always be supervised during playtime.

They’re loyal to their family members, but because they like strangers so much, they could be vulnerable to theft. Therefore, they shouldn’t be left outside alone ever, even in their own yard. Another thing to know is that the Mini Foxy Russell has a strong prey drive thanks to their Terrier lineage, so they shouldn’t be allowed to chase other animals even while playing.

This crossbred dog can make an excellent family pet if they’re well trained and are properly exercised daily. They are playful, but they don’t put up with teasing. Therefore, these dogs and the kids whom they will be spending time with should be taught how to properly interact with each other. They get along excellent with older kids who are a little more laidback than younger children. They don’t have to live with kids to be happy, though. They’ll thrive in a single adult or a couple’s household environment too.

While some Mini Foxy Russells do get along with other animals, this isn’t always the case. If they don’t start socializing with dogs that live outside the home while they’re still puppies, they could grow to be aggressive to strange dogs, which would make them hard to take out into public at any time. They should be able to get along with other household dogs that were already part of the family before they were adopted. However, their prey drive can make it tough to stop them from chasing cats, rabbits, and other small pets.

Things to Know When Owning a Mini Foxy Russell

There are still quite a few things to know about before becoming the proud parent of a Mini Foxy Russell. What should they eat and when? Do these little dogs really need to take walks? What about training? The answers to these questions and more follow.

The Mini Foxy Russell eats only about ¾ of a cup of food each day, but they tend to be picky eaters. If they don’t like the taste or texture of their food, they will let you know by simply skipping their meal. You may have to try more than one food before finding one that your new puppy will like. One important thing to consider when choosing a new food for this crossbreed is their breed size.

Because they are so small, they don’t typically need as much protein or fat as large breeds do. Luckily, many brands on the market offer formulas that are designed specifically for small breeds like the Mini Roxy Russell. Foods made just for small breeds feature smaller kibble pieces that are easy for these dogs to chew.

Although small in stature, these dogs have large appetites for exercise. They should go on long walks every day to release pent-up energy and to stimulate their minds. They can become destructive then they are bored or don’t have an outlet for their energy, so games like hide-and-seek and fetch should be regular parts of daily life at home. These dogs love running, sniffing, and digging in the yard, but they don’t like to feel confined, so they tend to jump over and dig under fences. Therefore, their yard should be enclosed with a fence that is installed a couple of feet into the ground and that stands at least 4 feet above the ground.

Training is just as important for the Mini Foxy Russell as it is for any other dog breed. Without learning obedience, this crossbreed can quickly become unruly. Their stubbornness and curiosity mean that boundaries are a necessity within the home and while in public settings. Boundaries can be taught through obedience training, which should start as soon as a Mini Foxy Russell is brought home for the first time. Obedience training can be done at home or in a classroom setting if socialization is important. A combination of the two methods can be employed until the owner is comfortable doing the training themselves at home.

The Mini Foxy Russell is easy to take care of. Weekly brushing should be enough to keep tangles at bay. They do shed throughout the year, so regular vacuuming might be necessary to keep dog hair from building up on the floors. Their nails might need to be trimmed occasionally, and their ears should be checked for dirt buildup periodically. They don’t typically need to be bathed unless they get into mud or garbage while spending time outdoors.

These dogs are generally healthy throughout their lives, although there are a few minor health conditions they are prone to that potential owners should be aware of.

There are a few small personality differences between the male and female Mini Roxy Russell, such as the fact that girls seem to be easier to potty train than boys. Females also tend to be more independent and curious by nature. Furthermore, many owners find that males are more protective of their family members than females. In the end, both girls and boys are loving, intelligent, and energetic dogs that would love nothing more than to become a valued part of the family dynamic.

If you’re looking for a lap dog that is adventurous, lovable, and energetic, the Mini Foxy Russell may be the right pet for you. These dogs won’t sit still for long, but they will provide you with hours of laughs and a lifetime of fond memories. They are relatively easy to care for if they get enough exercise, but they will show their stubborn side when they’re overtired or bored.

Overall, they are even-tempered and patient dogs that can live in apartment and house settings. Are you interested in adopting one of these adorable crossbreeds? If so, what are you most excited to experience with your new pooch first?