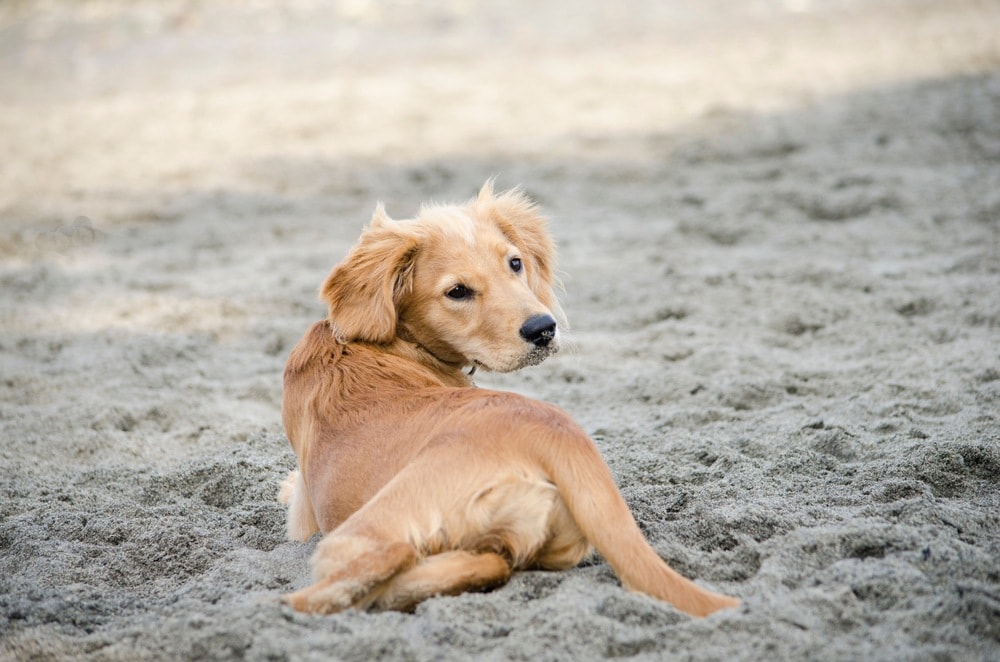 True to both its parent breeds, they are incredibly outgoing and love people. Their gentle nature means that they are friendly with other dogs, and often need little socialization to befriend cats and other animals as well.

The Cavalier King Charles Spaniel officially got its name in the 1600s from the English monarchs who favored them. They were bred as companions and to hunt small game. By the late 17th century, however, they had become rare and almost disappeared.

The breed was not revived until the 1920s when an American came to Britain looking for the breed he’d seen in old paintings. He began offering money for the best old-type spaniel at the Crufts Dog show, stirring up a revival of what came to be known as the Cavalier King Charles Spaniel.

The Golden Retriever, on the other hand, was developed in the late 19th century by British aristocrats as a retriever of game and companion. Now they are one of the most popular companion dogs but also used for a variety of work, including hunting, search and rescue, and disability assistance work.

Golden Cavalier Puppy – Before You Get One…

1. The Cavalier King Charles Spaniel was a favorite of royalty.

As you might expect from the name, the King Charles Spaniel was named for the English monarch King Charles the II in the 1600s. They have been linked with British royalty since Queen Mary I in the 1500s, and the Grand Duchess Anastasia Nikolaevna of Russia also kept them as pets.

2. The Golden Retriever used to be known as the Golden Flat Coat.

Until 1920, the Golden Retriever was known as the Golden Flat-coat. Other, less common names include the Yellow Retriever and the Russian Retriever.

3. The Golden Retriever has a complex mixed-breed origin.

Although it has been suggested that this retriever evolved from Russian circus dogs, it is more likely that it was bred from crossings that started with a yellow Flat-coated Retriever and a Tweed Water Spaniel, with Irish Setter, Labrador, and Bloodhound.

Temperament & Intelligence of the Golden Cavalier 🧠

As with many relatively recent hybrids, there has not been much data collected on the intentional breeding of the Golden Cavalier. Owners who want to understand the potential personality traits will need to study the parent breeds for insight.

Both the Golden Retriever and the Cavalier King Charles Spaniel have been bred as companion dogs for hundreds of years. Though quite different in size, each breed is well known as affectionate people pleasers.

Are Golden Cavaliers Good for Families? 🏡

Cavalier King Charles Spaniels make great lapdog. They need lots of attention from their human companions and have moderate to low exercise requirements.

The adaptable, easy to train nature and sweet disposition of the Cavalier King Charles Spaniel has gained the favor of many royals over the centuries. For over a century they were the favorite breed of the English monarchy. And as you can imagine, they are a dog that loves to be pampered.

Golden Retrievers were bred specifically to excel at assisting their humans in the hunting field, but then be gentle and loyal in the home.

While they can be somewhat goofy and sweetly dopey at times, they are actually very intelligent dogs. In fact, Golden Retrievers are the number one breed choice for service dogs to assist the blind, deaf, and disabled. This is a dog that loves to learn how to help its friends and family.

All that being said, it’s important to remember that every dog has a unique personality. We can make some sweeping generalizations because of the centuries of data collected on these breeds, but there’s no substitute for spending time with and getting to know your canine companion!

Do Golden Cavaliers Get Along with Other Pets? 🐶 😽

A genial and adaptable fellow, the Golden Cavalier will often get along with dogs and cats alike, treating them as much a part of the family as the people. Early socialization should lead to a peaceful and harmonious home life with all pets.

However, as with any dog that has some hunting instinct in their breeding, you should always supervise interactions with small animals, and especially prey animals. Even a gentle dog might enjoy chasing a rabbit once in a while!

Things to Know When Owning a Golden Cavalier

The decision to add a dog to the family should be well considered and well informed. Here are a few things you should know about the Golden Cavalier before you bring a new canine friend home.

A nutritious, well-balanced diet is one of the best ways to make sure your canine friend is happy and healthy. Golden Cavaliers will do well with plenty of protein and fatty acids like omega-3s. But all dogs are omnivores and need a range of carbohydrates, fiber, vitamins, and minerals, too.

While it can be tempting to go for the cheapest kibble, we recommend searching out a high-quality brand – one that contains a range of nutrients and is not just proteins and grains. You can even supplement the standard meals with some fruits and vegetables. Check-in with your vet about safe foods and portion sizes.

A post shared by Boone The Mini Golden (@badbooney)

The Golden Cavalier has moderate exercise requirements. Though they can have some lapdog tendencies, they aren’t generally couch potatoes.

They do best in a rural or suburban home with ample outdoor access. And though Golden Cavaliers are adaptable and medium in size and energy, we do not recommend that they be kept in an apartment unless they have multiple opportunities per day to exercise in a yard or park.

These canines love to please and training them can be as easygoing as the dogs themselves. They respond well to positive reinforcement and are often very food motivated.

The Golden Cavalier does have some hunting instincts from the Spaniel side, so a strong recall should be trained early on. With their eager and obedient nature, they often take well to training on agility courses. And, of course, their retriever heritage means they’ll love to play fetch.

Due to their easygoing and gentle nature, the Golden Cavalier makes a spectacularly terrible guard dog. Both the King Charles Spaniel and the Golden Retriever have been specifically bred for their genial personalities, and like its parent breeds, this hybrid is friendly with just about everyone it meets.

Regardless of which of the two parent breeds your Golden Cavalier’s coat resembles most, they will require considerable grooming. Daily brushing is recommended to remove dead hair and prevent matts from forming, particularly in the feathered hair around their feet and ears.

Check their ears regularly as well – the floppy shape may hide the inside from view, but you’ll need to clean them often to prevent wax and dirt buildup. Cleaning your dog’s ears regularly will help prevent ear infections and parasites like ear mites.

The Golden Cavalier should have its nails clipped frequently if they do not have ample opportunity to wear them down naturally. Check at least once or twice a month to prevent cracking and foot problems.

Hybrid breeds are generally healthier than the purebred lines they come from, but there are still a few health concerns to be on the lookout for.

Though there are a few broad physical differences between male and female Golden Cavaliers, there are not many blanket statements on temperament that encompass an entire sex. After all, just like humans, every dog has its unique personality.

Males are, on the whole, larger in size and more prone to sexually aggressive behaviors like humping. Females tend to be more petit and reserved.

From their parents, the Golden Retriever and the Cavalier King Charles Spaniel, the Golden Cavalier has inherited many desirable character traits in a companion dog. They are often incredibly affectionate and calm, and so sweet on everyone that they are considered some of the worst watchdogs around.

They also have a slew of winning combination of physical traits as well: big and adorable doe eyes, a slightly curled and wavy coat in rich colors, and “just right” size that will be neither small enough to get underfoot, nor large enough to yank you off your feet.

If you’re still considering and want further breeds to compare and contrast, do some research on the Labrador Retriever and Brittany Spaniel. But if you’re looking for a gentle, highly trainable companion dog that will get along with the whole family the Golden Cavalier might just be your perfect dog!