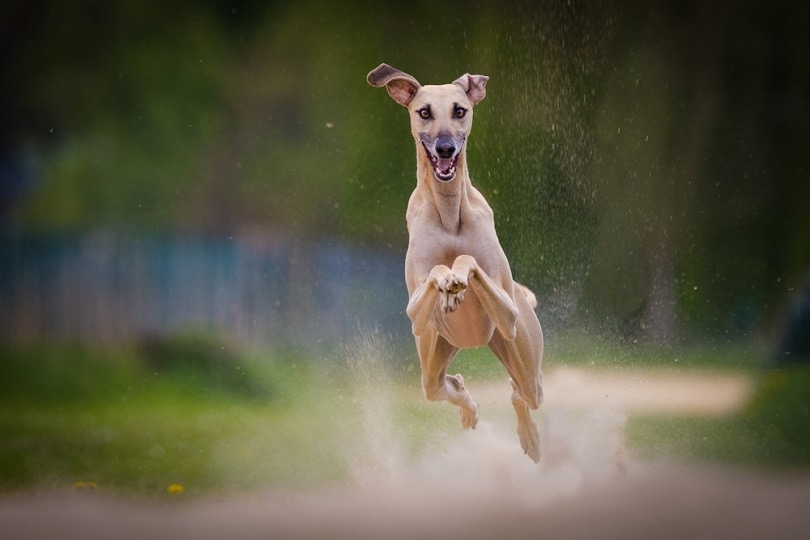 Many dog breeds are quite springy and can jump higher than the average person can. However, some dogs are particularly talented when it comes to jumping high. These dogs may be able to scale fences and can be quite the escape artists. Some are even known to jump through windows!

Various dog breeds regularly participate in agility competitions, which often require that the dog can jump quite high. Many of these jumpers can make great companion dogs if their special jumping abilities are kept in mind.

The 14 Highest Jumping Dog Breeds Are:

Border Collies are working dogs that were bred for herding. They are some of the best herders in the world. While they can herd just about everything, they are particularly good at herding sheep. They were developed around the Anglo-Scottish border, hence their name.

These dogs are extremely intelligent and athletic. They can jump higher than most dogs and are smart enough to scale a fence. They can compete in all sorts of dog sports and are excellent at it. Their high intelligent level often means that they need regular mental stimulation unless they are actively herding. If you decide to adopt one as a companion animal, you’ll likely need to spend hours a day keeping them entertained.

The Shetland Sheepdog was developed on the Shetland Islands of Scotland. This smaller dog looks similar to the Rough Collie, albeit smaller, and their personality is quite different. They are smart dogs that can be quite excitable. They become extremely attached to their people to the point that they are often called their owners’ “shadows.”

This hardy breed thrives in the harsher conditions of the Shetland Islands. They do well in just about any environmental conditions. They were bred as herding dogs, though they can perform many other jobs as well. Today, they are often kept as companion animals.

Despite the name, the Australian Shepherd was actually bred and developed in California. The exact origins of this breed aren’t well-known. However, they likely descended from Collies and other working dogs that were imported to California. Originally, this breed was only used as herding dogs, though they are often kept as companion animals today.

These dogs are quite active and intelligent. They have strong herding instincts, even as companion animals. It isn’t rare for them to attempt to herd children and other pets.

The Papillon is a toy Spaniel. In fact, they are one of the oldest toy Spaniels currently still around. They are known for their characteristic butterfly ears, which is where they get their name from. While these dogs do look like a cuddly toy breed, this isn’t really the case. They are working dogs through and through. They are known for being active and adventurous. They love people and make great family dogs, though they should be watched around children due to their small size.

They are extremely intelligent and require regular mental stimulation. Otherwise, they may develop behavioral issues due to boredom.

Their small size and athletic nature enable them to jump extremely high, even when compared to larger dogs. They can be escape artists, especially because they are also intelligent.

German Shepherds are working dogs, even though they are kept mostly as companion animals today. As their name suggests, they originated in Germany. Despite their somewhat “wild” appearance, this breed is relatively modern and dates back to 1899.

Originally, these dogs were bred for herding sheep. However, their intelligence and trainability have allowed them to be used for a wide variety of different purposes. For instance, they are often used for disability assistance, police roles, and even acting. They can be a bit protective of their owners, so early socialization is required.

In any case, these dogs love people and are not particularly aggressive, despite common misconceptions. They are friendly and love just about everyone. They do require socialization, though they aren’t particularly protective or territorial. They can be extremely energetic, as they do have a bit of Terrier blood. This is why they can jump so high and why some people consider them dangerous. But they just get a bit too excited sometimes.

These sighthounds were bred for coursing game, though most are kept as companion dogs or greyhound racing today. This breed has recently enjoyed an increased resurgence in popularity as a family pet, largely due to the push for families to adopt retired racing dogs.

This gentle breed has extremely powerful legs. This allows them to jump higher and run faster than most other breeds. They can exceed 40 mph, making them one of the fastest dogs around.

Many people consider these dogs to be great family pets. They are loving and gentle. Despite what many think, they don’t require much exercise. They are actually couch potatoes and do best in quiet environments with other children.

The Australian Kelpie is a herding dog that was bred to work independently. They can herd with little to no guidance, making them popular among farmers. They are still mostly found in Australia, though they have been exported all over the world to herd sheep, cattle, and goats.

Today, the breed has two obvious variants: the show Kelpie and the working Kelpie. The show variant has been bred for conformation dog shows, while the working Kelpie was bred to retain their herding instincts. Of course, these dogs are also kept as companion animals.

The Rottweiler is a medium-to-large dog that was used mostly for herding livestock. Eventually, the breed’s protective instincts were honed for protecting carts of butchered meats, which were often a source of robberies. This was continued until the wide use of railroads, which replaced the dog. Today, they are kept as companion animals and used as search-and-rescue dogs and guard dogs.

These dogs are well-natured and attached to their people. They are often described as fearless, which is one reason that they are great guard dogs. They are a bit aloof toward strangers, but they shouldn’t be aggressive. Early socialization is important to prevent their protective behaviors from getting out of hand.

The Belgian Malinois is an alert herding dog. They are strong and well-muscled. They were bred to be working dogs, and their physique shows this even today. They are used for all sorts of different jobs, including police work and search and rescue. They can be intense, especially when they have a job to do. Their intelligence often means that they require a great deal of mental stimulation, which can be hard to give them as companion animals.

This breed is extremely attached to their family and loves to perform. They are extremely people-oriented and need quite a bit of attention, though.

The Jack Russell Terrier was originally bred for fox hunting in England. They are small white-and-tan Terriers that can be quite active and energetic. They need high levels of exercise and stimulation daily, which can make them a bit of a handful for laidback families. Their energetic nature allows them to jump high and scale fences when necessary.

This breed is kept largely as a companion animal today. They aren’t prone to many health problems and make good family dogs as long as they are exercised properly. They are friendly and good-natured with playful children. If you’re looking for a dog to run around with your kids, this is a good option.

Though they are a rarer dog breed, the Vizsla has a long history. They are one of Hungary’s most prominent hunting dogs, capable of hunting both fowl and upland game. They are used in a variety of different dog sports and are known for their outstanding trainability. These dogs are lively, but they are also gentle-mannered and behave well indoors. Their excellent nose makes them great trackers and hunters.

These dogs are extremely affectionate, especially with their family. They do have protective instincts, which means early socialization is required. They can make good guard dogs due to their fearless nature.

The Rat Terrier is a small hunting dog that was often kept on farms throughout the United States. They were used to keep rodents and similar animals from harming crops, making them a natural form of pest control. Today, they are most often kept as family pets. They are quite intelligent and socially sensitive. This makes them quite easy to live with. It also means that they need to be socialized early and often, though.

This breed does need quite a bit of mental and physical socialization. That said, they are extremely loyal to their owners and respectful. They make good inside dogs for this reason.

The Whippet is often known as the small Greyhound. In many ways, they do look like smaller Greyhounds, and they tend to act like them too. They may even be direct descendents. They are great at lure coursing, agility, and even dock diving. Anything physical, these dogs tend to excel in.

These dogs are also popular companion animals, especially for those who want a Greyhound but in a smaller package. These dogs are extremely quiet and not prone to barking. They do need regular exercise, but not nearly as much as you might think. They will likely spend most of the day sleeping.

PetFlow vs Chewy: Which Pet Store is Better in 2022?

My Dog Ate Oreo Cookies! Here’s What To Do (Vet Answer)