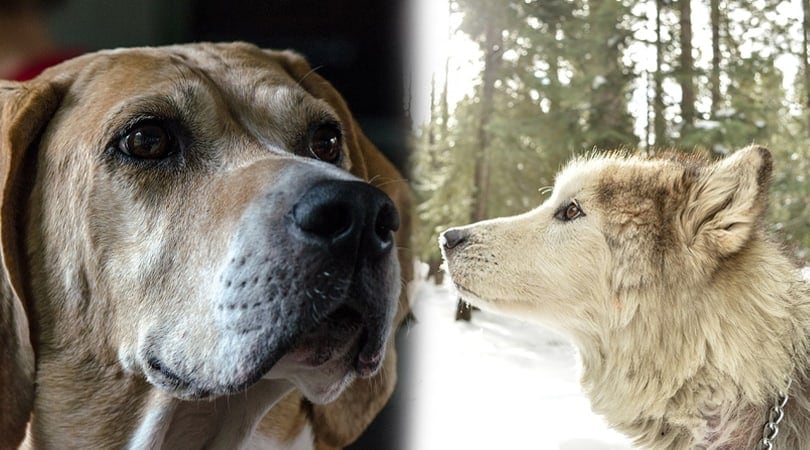 The Mally Foxhound is the result of breeding a Malamute with a Foxhound. This mixed breed would technically be a type of “designer dog.” However, this breed is becoming more and more widespread. Some people are attempting to create a “purebred” Mally Foxhound by breeding dogs of this breed together.

Technically, this mixed breed can be created using any foxhound. But it is almost always created using the English Foxhound. Don’t be surprised if individual breeders use other Foxhounds, however.

A mixed-breed can inherit traits from either of its parents. Even within the same litter, a mixed breed can vary quite a bit. Some puppies are going to look and act like one parent more than others. You never know exactly what you’re going to get. These dogs do not have set-in-stone traits like purebred dogs do.

With that said, there are some traits that these puppies tend to have. In this article, we’ll look at those traits. However, you should keep in mind that this breed varies widely.

Mally Foxhound Puppies – Before You Buy…

The Mally Foxhounds are working dogs first-and-foremost. Both of their parents were bred to work, so you can expect that they will be active and ready at all times. They are somewhat good hunting dogs, though not as good as their Foxhound parents. They can be much larger as well, thanks to their malamute genes.

These dogs are mostly bred for companionship. They don’t have exactly as strong hunting instincts as Foxhounds, which means they probably won’t make the best hunting dogs. Of course, because they are a mixed breed, you never exactly know how good of a hunter they will be.

Your best bet is to check your local shelter. Rescues for Foxhounds and Malamutes may also have this mixed breed from time to time. Not all breed-specific rescues have mixed breeds as well, but many of them do.

1. This breed is relatively healthy.

As a mixed breed, this dog has a more diverse genetic pool to draw from. This makes genetic diseases rarer and results in a healthier breed overall. We all know that inbreeding can result in health problems. Sadly, this is common among purebred dogs. After all, that’s how you get purebred dogs in most cases—mixing dog breeds eliminates this problem.

While one of their parent breeds excels at hunting, this mixed breed’s instincts are usually not pronounced. Because of this, they are typically not used for hunting. However, some individuals may be great hunters – it just isn’t the norm among the whole breed.

3. This breed is most common at rescues and shelters.

There are very few breeders that work with this breed exclusively. Because of that, they are most commonly “accident” puppies. This results in many of them being at shelters and in rescues. Your best bet is to look there if you’re looking to adopt one.

Temperament & Intelligence of the Mally Foxhound

The Mally Foxhound can have personality traits from either parent. Temperament is a result of genetics and the environment. Because these dogs can be raised in a wide variety of environments and have a diverse genetic pool to inherit from, you never know exactly what you’re going to get. Mixed breeds rarely have a “set” personality like you often see in a purebred dog.

With that said, both parent breeds tend to be independent and have minds of their own. The Mally Foxhound can be stubborn, which makes them a challenge for new pet owners to handle. They were bred to work, so they need plenty of exercise. They will often act like giant puppies for much of their life.

They do not have strong guarding instincts, so they tend not to be territorial. They are quite friendly and can get along with most people with ease. Of course, early socialization is required. If you get these dogs around many people when they’re young, they tend to be very social and friendly.

Yes. These dogs are mostly companion dogs, which means they have many traits that a family would appreciate. They are very playful most of the time, which is perfect for a home with children. They usually get along well with children as well, primarily when they are raised around them.

They do need a bit of exercise, so that is something to keep in mind. However, if you have a large family, this canine will probably have plenty of people to play with.

The Mally Foxhound gets along fine with other dogs in most cases. They aren’t very pack-oriented but are usually friendly with other canines as a default. Early socialization helps ensure that they are friendly and not fearful, though.

They have decently powerful hunting instincts, so they may not be good with other sorts of pets. They are likely to see cats, chickens, and rabbits as prey animals. Early socialization may help with this problem, however. If they are raised around cats their whole life, they may not recognize them as prey animals.

Thinks to Know When Owning a Mally Foxhound:

Because of their playful nature, these dogs do best with a high-protein diet. They tend to eat quite a bit because of their larger size, so you may want to look for something budget-friendly. They do not have any particular nutrients or vitamins they need more of than other dogs, so any commercial dog food generally fits them fine.

The Mally Foxhound is very active. They need hours of exercise every day. A fenced-in yard is best for this reason. However, you cannot just put them in a yard and expect them to meet all of their exercise needs. They need regular walks and playtime as well.

If their activity needs are not met, they can get a bit destructive. They will try to make their fun, which usually involves tearing something up or chasing something they shouldn’t.

This breed does not train efficiently. Mally Foxhounds tend to be quite stubborn. Even if they know a command, they may not listen to it. This trait makes training them very frustrating. They are not best for novice dog owners for this reason.

Starting training at a young age is best. These dogs respond better to positive-training techniques, as negative ones often make them react more stubbornly to commands. However, no matter how well-trained you think your dog is, you should always carry around a bag of treats for encouragement.

Theoretically, these dogs can have short or long fur. However, in practice, it is almost always short. Practically every picture of this breed you see has a dog with short hair, like a Foxhound. Because of this, they usually do not need much grooming at all.

They will shed quite a bit, so you should plan on brushing them a few times a week to remove the excess hair. They do not need bathing regularly unless they get into something dirty – like mud, for instance.

As you might guess, they need their nails trimmed and their teeth brushed regularly. Your groomer can do this for you. Many have walk-in services that are very inexpensive. Or, you can learn how to do these things yourself. It is tough to brush a dog’s teeth wrong.

While these dogs are generally healthy, they may be prone to a few different conditions. This trait is because their genetic background is unique, so there are quite a few genetic disorders that might appear seemingly out of nowhere.

When choosing a puppy, it is essential to check on the puppy’s parents’ health, as this is the best indicator of the puppy’s future health.

This mixed breed is unique – that is certain. They can have a wide range of traits and abilities. You never quite know what you’re going to get with these dogs!

With that said, they do usually make good family dogs as long as you can meet their exercise needs. They love to play and do best in an active family that has experience with dogs.