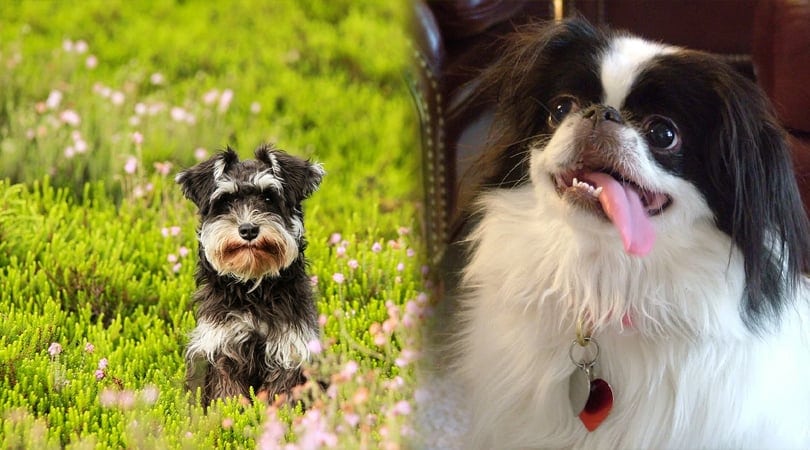 He is a small and funky guy with a unique and quirky appearance. His parent’s personality couldn’t be much more different. With the Mini Schnauzer being one of the doggiest dogs in the canine kingdom, and the Japanese Chin being more feline-like than canine.

This wonderful hybrid pup offers the best of both worlds, and he is an excellent option for those who cannot choose between his two parents. Eager to find out more about this little fellow? Let’s jump straight into the designer doggie details.

Mini Schnauzer Chin Puppies – Before You Get One…

The Mini Schnauzer Chin is a little dog with big dog personality. Many dog owners like this kind of canine, but some find the feistiness too much to handle. You can expect that no matter which parent he takes after more, he will be stubborn as heck just like both parents. For this reason, if you want a fully obedient dog, the Mini Schnauzer Chin is not the one for you.

Following on from this point, we would recommend that this guy is homed with experienced dog owners who know how to stand up to the sass. If you have never owned a dog before, at least an independent one, you are in for a wild and potentially problematic ride with this guy.

He is more energetic than people think, which is why Miniature Schnauzers often end up in rescue centers. Simply because their owners thought he would be a cuddly lapdog with not much energy. Despite his cute fluffy teddybear appearance, he is a little pocket rocket who needs a lot of exercise, playtime, and attention.

Without it, he can become destructive and problematic. He also hates to be left alone for any period of time, so he needs to be home with a family that can spend most of their time with him. If you and your family work long hours or like to travel doggy free, you should consider a less needy breed altogether.

1. The Mini Schnauzer Chin has a high prey drive

His Miniature Schnauzer parent has a very high prey drive, so you can expect him to inherit a little (or a lot!) of this too. His parent was used as a rat exterminator on farms, so anything small and furry should be wary of this guy.

2. The Mini Schnauzer Chin can be very cat-like

His Japanese Chin parent is sometimes described as more cat-like than dog-like. This is because he is very fastidious when it comes to cleaning his coat. He loves to sit in your lap and snuffle. And he also likes to climb onto shelves and watch the world go by from up above.

3. The Mini Schnauzer Chin is a sensitive soul

Despite his big boy bravado, this guy is a sensitive little pooch who doesn’t like to be told off, and he will sulk if you do. He also hates to be left alone for too long. It’s an endearing trait if you like your dog to be dependant on you, just don’t tell his friends down at the local doggy park!

The Mini Schnauzer Chin is a fun family pet to have around the home. There is never a dull moment with this guy about. He is always up for a game of chase the ball, fetch, or brain games you set him. And because he is very intelligent, he’ll pick up the rules in no time.

He is very sweet and loving with his family. And he’ll be nudging you towards the sofa in the evening, hinting for cuddles. He is a tough cookie, but he isn’t afraid to show his feelings and express his love for you.

He can be a little aloof with strangers at first, but he will warm up to them quickly after a short while. He’ll be performing his newly learned tricks for all the attention and belly rubs. When he isn’t sure about someone, he will vocalize his nervousness. This makes for a good alarm bell, but it can also be annoying for the neighbors if you let it go unchecked.

As we have already said, he is an intelligent pup. But, he is also very stubborn and independent. This means that no matter how clever he is, he won’t listen to them if he isn’t in the mood for your training sessions or commands.

He is also said to be intolerant of over-excited children and their prodding and grabbing, and he can get a bit grumpy. For this reason, he should only be homed with a family with older children. Although we love this guy for his gorgeous teddybear looks, it also gets him into trouble with young children.

Do Mini Schnauzer Chins Get Along with Other Pets? 🐶 😽

As long as he is socialized well as a pup, he will get along with other dogs. He is likely to get along with cats too, not only because they aren’t much smaller than him, but also because he is part cat in his ways. And for this reason, cats are more likely to accept him too.

When it comes to other types of pets, such as rabbits, mice, and guinea pigs, he is unlikely to coexist peacefully with them. You will have to keep them separate, and it’ll become his lifetime mission to take a bite (sorry to be gruesome, but literally). This is simply because of his Schnauzer ratting history, and there is little you can do to train it out of him.

Things to Know When Owning a Mini Schnauzer Chin:

Now we are going to take a closer look at the daily needs of Mini Schnauzer Chin. From what he eats to how much exercise he needs, if it’s not listed below, you probably don’t need to know about it.

The Mini Schnauzer Chin will eat approximately one cup of kibble every day. This might be slightly more or less depending on his age, size, and energy levels. You should always feed him the best quality food that you can afford. High-quality food will ensure that all of his dietary needs are taken care of.

As he is a small dog breed, if you feed him kibble, you need to look for one specifically designed for small breed dogs. They are optimized for the unique nutritional needs of small breed dogs, and the kibble pieces are small enough so that he can eat them comfortably.

The Mini Schnauzer Chin needs approximately 30 to 45 minutes of exercise every day. If he takes after his Chin parent more, he’ll need less than if he mostly takes after his Schnauzer parent. Without this, he will become grumpy and problematic. He will also become destructive and take it out on your favorite armchair.

As he is very intelligent, you’ll need to mix up his activities to keep him interested. Otherwise, he’ll run off into the sunset in search of something more interesting. He’ll make a great jogging partner, mountain hiker, or frisbee catcher. Just be sure that you have a rucksack to carry him in if he gets too tired. Thankfully, he’s not too heavy.

The Mini Schnauzer Chin needs focused and consistent training to ensure that he becomes as obedient as possible, at least for him anyway. As you already know, he is not the most respectful of dogs because some days he’ll wake up on the wrong side of the crate, or he’ll think he knows better.

To keep him interested in your training sessions, you will need to keep the training short and sweet, just like him. Find out what motivates him, be that treats or a ball, and use it to your advantage. This is called positive reinforcement training, and it is by far the most effective training method for dogs.

The Mini Schnauzer Chin is a very clean pooch thanks to his self-grooming Chin genes. If he gets a little bit dirty, you’ll find that he’ll lick himself clean. You will have to give him a bath once every 8 to 12 weeks.

Because he is likely to lick himself clean, we would suggest a sensitive shampoo or one that is designed specifically for cats and dogs. These types of shampoos are safe because they are designed for cats who lick their fur daily.

He has a medium-length coat that is straight in texture and of medium denseness. You will need to brush him daily, to keep him looking healthy and keep matting at bay. Thankfully, because he partially takes after his hypoallergenic Schnauzer parent, he will shed much less than other dog breeds.

The Mini Schnauzer Chin is a relatively healthy dog breed who will most likely suffer from the health concerns that affect both of his parents. If you are about to welcome this boy into your life, be sure to read through the below health conditions and research their associated symptoms. This way, if something pops up, you know to take him to the vet for a check-up.

The male and female Mini Schnauzer Chins are very similar. The most significant difference is their height and weight, in that males tend to be larger than their female counterparts.

The Mini Schnauzer Chin is a unique dog, both in his population, personality, and appearance. If this is what you are looking for, this guy will make a fantastic canine option for you. Just be sure that you can give him the time, attention, and company that he craves.

He is a friendly and fun little pooch who will keep you, and the whole family entertained for hours on end. He is the right side of sensitive, but sturdy enough to take a few hours of playtime and adventure if that’s what you want to put him through.

If you can tick all of his boxes, we are sure that you and the Mini Schnauzer Chin are sure to get on like a house on fire.