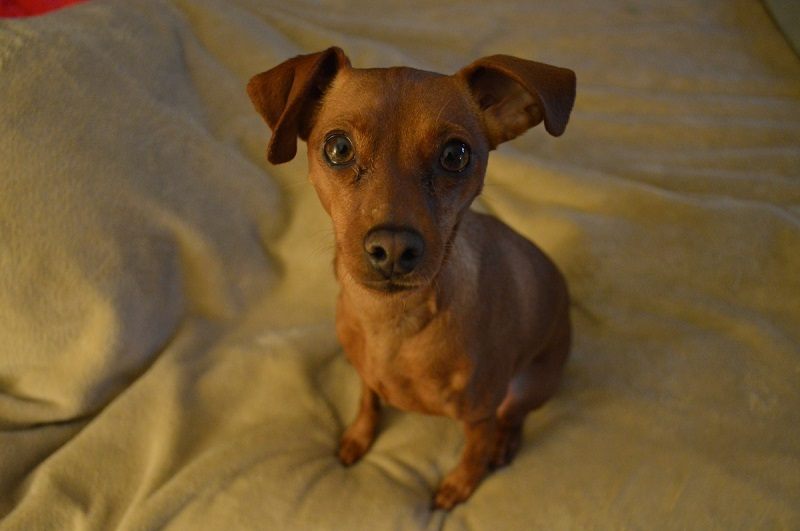 The Miniature Pinscher is known as the King of Toys, and it has a compact body that stands no more than 12.5 inches tall. It comes in several colors and has dark, oval eyes. It has erect, high-set ears and a hackney gate that resembles a horse trot.

Called Zwergpinscher (dwarf midget) in Germany, his country of origin, the Min Pin was bred to hunt rats and later, as a guard dog.

The Miniature Pinschers’ origins are not clear, but they are thought to go back several centuries. Many experts believe the breed is a mix of the Daschund and the Greyhound. It is one of the most popular dog breeds in Europe and is also quite popular in America.

Miniature Pinscher Puppies – Before you Get one

While the Min Pin bears a resemblance to a smaller Doberman, they only share a tangential history. They both are likely to have descended from the German Pinscher, but the Doberman comes from Rottweiler stock.

Like many toy breeds, the Min Pin looks dainty but he’s a sturdy dog with a boundless personality that will overwhelm the household if given a chance. A strong pack leader, early training and socialization are crucial for a happy home and a happy Min Pin.

3 Little-Known Facts About the Miniature Pinscher

1. The Miniature Pinscher is native to Germany

2. The Miniature Pinscher was almost extinct in 1928 but was brought back by American breeders.

3. Many people mistakenly believe the Miniature Pinscher is a Doberman Pinscher.

Temperament & Intelligence of the Miniature Pinscher 🧠

The Miniature Pinscher is a small dog with a big personality. It enjoys clowning around and staying busy. It enjoys being around children and other pets and playing tricks on them. It’s assertive and proud, rarely showing fear, even in the most dangerous situations, but also enjoys cuddling on the couch and watching television.

The Miniature Pinscher is very intelligent and picks up new tricks quickly. It can also be stubborn and try to trick you into getting what it wants, especially if it’s worked in the past. Their intelligence and assertiveness also make them great watchdogs despite their small size.

The Miniature Pinscher is the perfect family pet because it loves to entertain and clown around with children and other pets. Its small size means you don’t need to worry if it will knock over toddlers, and its hair is very short and unlikely to get pulled. Though it’s an energetic dog, it can usually get most of its exercise running around the home. It’s also suitable for small apartments.

The Miniature Pinscher does get along with other pets if they are properly socialized. However, they do often take the dominant role, especially with larger animals and demand to be the boss. Outside they often need to be on a leash, or they will chase small animals and fight with dogs that may pass by. They like to show enemies with their backside, and they’ll kick the ground and bark. This behavior can get out of hand if not dealt with early.

Things to Know When Owning a Miniature Pinscher

Here are some things you should consider before purchasing a Miniature Pinscher.

The Miniature Pinscher is an extremely active dog, but its small size means you won’t go broke buying food. High-quality dry dog food is usually the best, with some wet food thrown in as a treat or supplement on occasion. Look for a brand that has chicken, turkey, lamb, or beef listed as its first ingredient and make sure the food also contains antioxidants and omega fats. We recommend checking with your vet before feeding any grain-free, or small dog brands of food to make sure your pet gets the best nutrition.

The Miniature Pinscher is a very energetic and clever dog that will get most of the exercise it needs on its own by performing antics around the house. However, a few short walks each day or a few minutes playing catch with the ball each day should help burn off any excess energy to help keep your dog quiet at night. Exercise is also a great way to bond with your pet.

If your Miniature Pinscher wants to learn, training is a breeze. It’s a very intelligent breed that can pick up most commands after only a few tries. The challenge is often getting them interested in your training session because these dogs like to follow their own path and can be stubborn if you try to force them. The best way to train your dog is with positive reinforcement, which means lots of praise and lots of treats. Holding your training session at the same time every day can also help get your dog on a schedule that it’s comfortable with and learns to expect. With patience, you can teach your Miniature Pinscher to do any trick any other dog can do.

The Miniature Pinscher has a short hard coat that is very easy to maintain. It only requires occasional brushing with a soft brush or hound glove to keep the coat looking nice and shiny. You will need to regularly clean and dry the large ears to prevent infections, and you will also need to trim its nails when you hear them clicking on the floor.

While the Miniature Pinscher is considered a healthy breed, there are a few conditions that are known to affect them.

Male Miniature Pinscher has a more stable mood than females, but they are also slightly more aggressive. Females tend to be more independent and set in their ways. Females are less likely to perform for food, but they often like to spend more time near their owners watching television.

The Miniature Pinscher is an amazing companion that will entertain you with its non-stop antics and clowning around. It adapts quickly and is at home in a small apartment as it is in a large home. It gets most of its exercise doing its daily routine but is always up for a short walk or a quick game of fetch. They have no fear and will often challenge larger animals that invade their territory.