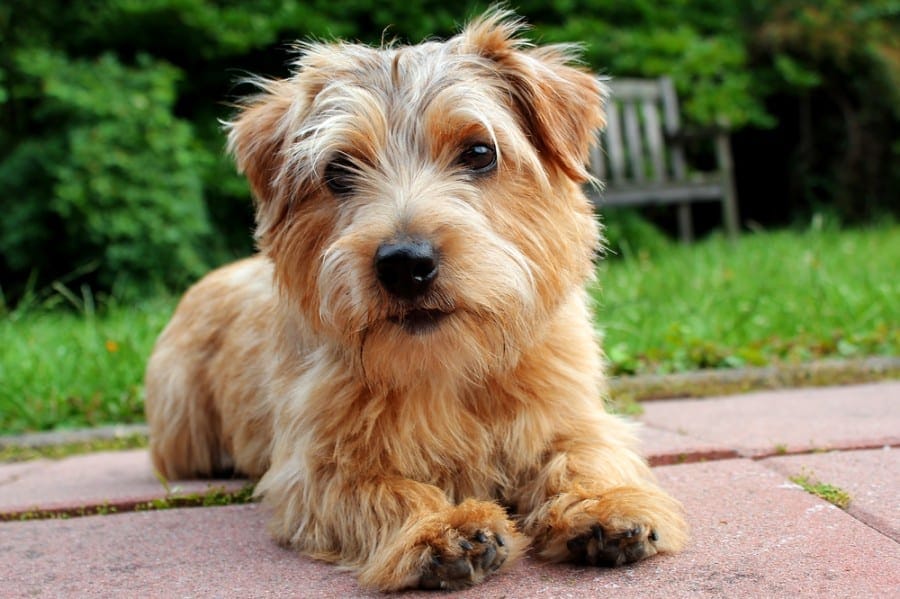 Norfolk Terriers are the smallest dog in the Terrier group. However, don’t let their small size deceive you — they are still a relatively stocky breed. Underneath a wiry coat of black, red, or brown fur, they are strong pups.

Norfolk Terriers were bred for ratting and fox bolting sometime around the beginning of the 1900s. They need plenty of love and are happy to be the family’s unlikely guardians, like a typical Terrier. They are closely related to the Norwich Terrier.

Norfolk Terrier Puppies — Before You Get One

3 Little-Known Facts About the Norfolk Terrier

1. Roughrider was the name of the breeder of these delightful little dogs.

These Terriers were initially brought about in the early 20th century. They do not have a long history compared to other Terriers but have quickly gained in popularity since then.

As interesting and gregarious as the puppies that he ended up breeding, Frank “Roughrider” Jones was the English dog breeder responsible for them. He was a horseman as well, which is where he received such a striking nickname.

Roughrider initially developed the dogs as ratters and fox bolters, selling them to other equestrians to help hunt small vermin. He was responsible for both the Norwich and the Norfolk Terriers.

2. They are more popular around their area of origin.

The Norfolk and Norwich Terriers have taken their time spreading out around the continents. They are a fun breed with a well-balanced temperament, as is somewhat common in Terriers. However, they are the most popular in the region in which they originated.

As you can guess, the Norfolk Terrier is popular around the city of Norfolk. Here, people identify with the pup and claim it as one of their own. The Norwich Terrier has also become popular close to this region, in the East Anglia area.

3. Drop-ears and prick-ears were the only differentiation between two types of Terriers for many years.

For many years, there wasn’t any difference between the Norfolk and Norwich Terriers. Slowly, the two became more separate, but it wasn’t until 1964 when the Kennel Club in England recognized Norfolk Terriers as an entirely distinct breed.

It wasn’t until 1977 that the Canadian Kennel Club officially accepted that same difference, and the American Kennel Club followed suit two years afterward.

Often, the only identifiable difference between the two dogs is their ears. In the 1930s, the breeders of the dogs were trying to establish more of a breed standard. There was not a recognized difference yet. They stopped interbreeding dogs with tall ears, or prick-eared pups, with those who had floppy ears, or drop-ears.

In the end, they were saved by a breeder named Miss Macfie. She worked with other breeders around the U.K. to reestablish the adorable breed that we have today.

Temperament & Intelligence of the Norfolk Terrier 🧠

The Norfolk Terrier can effectively be described as spunky. They love to get out and put in a shift, feeling like they are helpful to those they love the most. These Terriers like to be around people, although they do fine being left alone.

These pups are confident, never appearing to be nervous. Another impressive trait is that they don’t commonly suffer from small dog syndrome. Instead, they are friendly and fearless, ready to take on anything that seems to be dangerous without quickly acting aggressively.

Even though these pups will love you to death, they also tend to wander. They don’t typically want to run away, but they can get distracted by a passing squirrel or rabbit.

These dogs are a practically perfect pup to consider for your family. They generally get along well with kids and even better with their beloved paw-rents. They will want to spend as much time with you as they can. Try to involve them in any outdoors or energetic family activities as often as you can.

Norfolk Terriers do usually get along with other pets. They can display symptoms of jealousy but this can be worked on. Since they don’t tend to act out in aggression, patience will be more critical when getting them accustomed to other animals being around.

Things to Know When Owning a Norfolk Terrier

These dogs are easy to maintain and their diet is no different. Since they max out at around 12 pounds, they don’t need much daily food. Feed them between ½ to 1 cup of food each day. Space it out and don’t allow them to free feed. It is said that Norfolk Terriers will eat anything that doesn’t eat them first. As such, they struggle with obesity and need to be carefully monitored. Train them to not pick up bits along the road on your daily outings.

To determine if they are gaining too much weight, look down from above at them. Their waist should be clearly visible. Place your hands on their back, with your thumbs along the spine and fingers spreading down. You should feel their ribs without being able to see them. If you can’t, they need less food and to get more exercise.

Norfolk Terriers are thought to be moderate- to high-energy dogs. However, since they are so small, it is easier for us to wear them out. Take them on long walks or short jogs every day.

You can also take them hiking, since they are always ready for any mountain. If they need more work on socialization, consider the dog park. They do well if they can get out with other pups because they love to play.

If walking is your primary form of exercise, try to get out about 4 miles per week, giving them about 30 minutes of activity each day.

Since Norfolk Terriers are quite intelligent, they are typically straightforward to train. Although they can be mischievous, overall, they want to impress their people and are down to earth. They behave best when they know that they are doing the right thing and that it matters.

During training sessions, give them plenty of positive feedback. If they know that they are making you happy, they will tend to repeat the action with ease. The only part of their training that can be difficult is housebreaking them. This part might take more patience than other tricks and commands.

Norfolk Terriers only shed lightly and are considered hypoallergenic. Since they have such excellent temperaments and are easy to care for, this is great news for people who suffer from animal allergies.

To minimize the amount that they shed around the home, they should be brushed at least once a week. Use a slicker brush and a comb. They will need to be trimmed a couple of times a year, since their fur grows more like hair than other dogs.

If they can be trained to be calm around scissors, use them to trim around their faces. Use clippers on the rest of their wiry hair if you feel comfortable. Otherwise, visit a groomer when necessary.

These dogs are robust and generally quite healthy. The riskiest disease that they can suffer from is mitral valve disease (MVD). It is life-threatening. Breeders of these pups are working extensively to eliminate the disease and to not breed dogs that develop MVD.

There are no recognizable differences between male and female Norfolk Terriers. At times, males can grow slightly larger than females but are still only a maximum of 12 pounds.

Many dog lovers prefer small dogs or big dogs, partly because of their varying temperaments. A Norfolk Terrier is a small dog with the personality of a big dog. This combination makes them the perfect pet for “big dog” people who aren’t able to have a large dog or don’t want another large breed.

Norfolk Terriers are wonderful, unique, and fun little dogs with big personalities. They want to protect and love their family and are highly adaptable. They typically get along with kids and other pets, and they can live in apartments or larger spaces.

Make sure to give them enough exercise and attention, and you will have a loyal life companion.