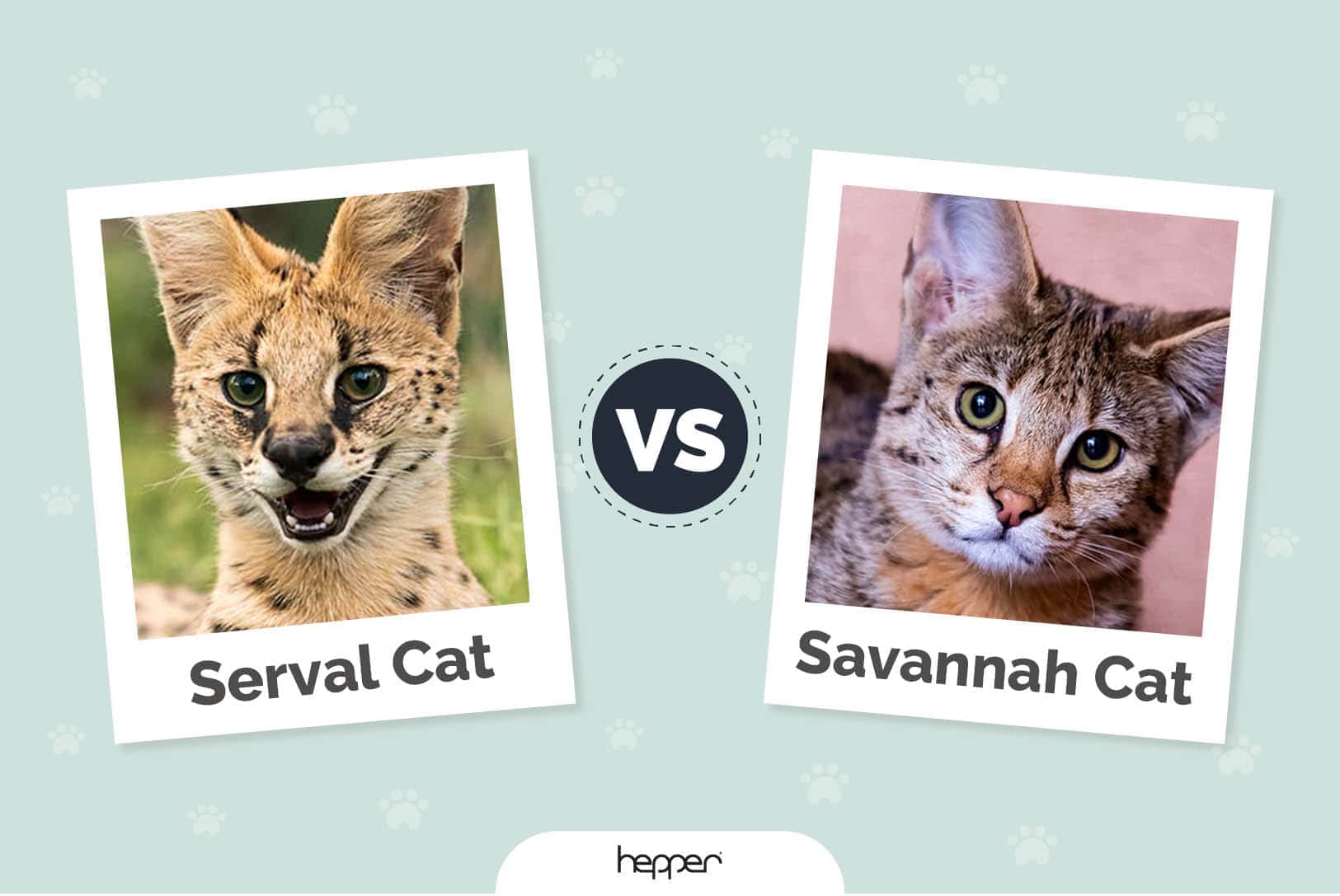 The Serval and Savannah Cat couldn’t be more alike or different. The Serval is a wild feline that inhabits the wetlands, savannas, and forests of sub-Saharan Africa. Like many predators on this continent, this cat specializes in specific prey, in this case, rodents. The Savannah Cat is a hybrid that began with a cross between a female domesticated cat and a male Serval in 1986.

The personalities of the two felines differ sharply. The Serval steers clear of humans and will take to hunting at night to avoid them. On the other hand, the Savannah Cat is an affectionate animal with the street smarts of its wild counterpart. Unlike other pets, you may find that you can’t own one of the two or even both, in some cases.

The Serval differs from many felines in that it likes water. It’s an essential part of its habitat preferences. The International Union for Conservation of Nature and Natural Resources (IUCN) considers it a species of least concern due to its stable numbers in the wild. Like many felines, the Serval is a solitary animal, except during the breeding season. Their ranges in the wild average 4.5 square miles.

The Serval is a long-legged, medium-sized cat. Its tan body is covered with dark stripes and spots that provide excellent camouflage in the tall grasses of its habitat. The pattern varies with the individual. It has a white muzzle with relatively large ears. Its head appears small for the size of its 24-inch body.

The Serval is somewhat elusive, which isn’t unusual for an animal hunted for its pelt. However, it’s worth noting that this trade has declined in recent years. Its secretive nature keeps it from becoming much of a pest as far as livestock are concerned. The Serval may take the occasional chicken or pet. Its primary threats are habitat loss, which can potentially increase the risk of conflict.

As a predator, rodents make up to 94% of the Serval's prey. Nonetheless, it’s not an essential factor in pest control because of where this cat prefers to live.

The Savannah Cat is relatively new to the show circuit, with The International Cat Association recognizing the breed in 2012. Its exotic appearance and intelligence have endeared it to many enthusiasts. Nevertheless, you’ll find it challenging to find a Savanna Cat, with prices starting at four or even five figures. One look at this pet, and it’s easy to see why.

The Savannah Cat is definitely in touch with its wild side with its sleek body and long tail. It’s a curious and determined animal with a strong prey drive. That makes it unsuitable for households with small animals as pets. As you may expect, this cat is a jumper that has an adventurous streak in it. Interestingly, it also doesn’t mind water, a throwback to its ancestry.

The Savannah Cat has a lot going for it as a pet. It’s affectionate with its owners and quite healthy. It also doesn’t shed as much as many other breeds. It has a long lifespan, given its adult size. The Savannah Cat matures slowly, which isn’t unusual. While this pet can be loving, it comes on its terms. This feline is active and would prefer exploring than cuddling up on the couch.

What Are the Differences Between the Serval & Savannah Cat?

The differences between the Savannah Cat and Serval pertain primarily to its size and personality. The latter is smaller, a trait encouraged by selective breeding. It is also more accepting of people, particularly if it’s socialized early in life. You may even find that the Savannah Cat is almost dog-like in its behavior.

On the other hand, the Serval is a wild feline with the personality to match. It prefers to keep to itself and avoid contact with people and other animals. Even though it has Siamese in it, this species doesn’t vocalize a lot. Its primary form of communication is scent marking its territory.

Both cats are high-energy, with the Savannah Cat a playful one, too. You may notice several similarities in the personalities of the two animals. Unlike dogs, humans often kept them for one purpose, pest control. The Serval and Savannah Cat succeed remarkably well on that score.

Which Breed Is Right For You?

It’s imperative that you check the laws in your area about the legality of owning either a Serval or Savannah Cat. They are complicated, with subtle variations. Some states, such as Arizona and Hawaii, outlaw the Serval outright. In other places like Montana and Florida, you can own one with a permit. You’ll also find restrictions on the generation of the animal.

For example, California bans first-generation Savannah Cats, whereas Iowa puts the fourth generation as its standard. It’s essential to investigate whether domestic cat hybrids are allowed, too. Some states put conditions on the specific ones or the generation time. You’ll likely find more luck with a Savannah Cat versus the wild Serval. That fact alone can determine which breed is right for you.