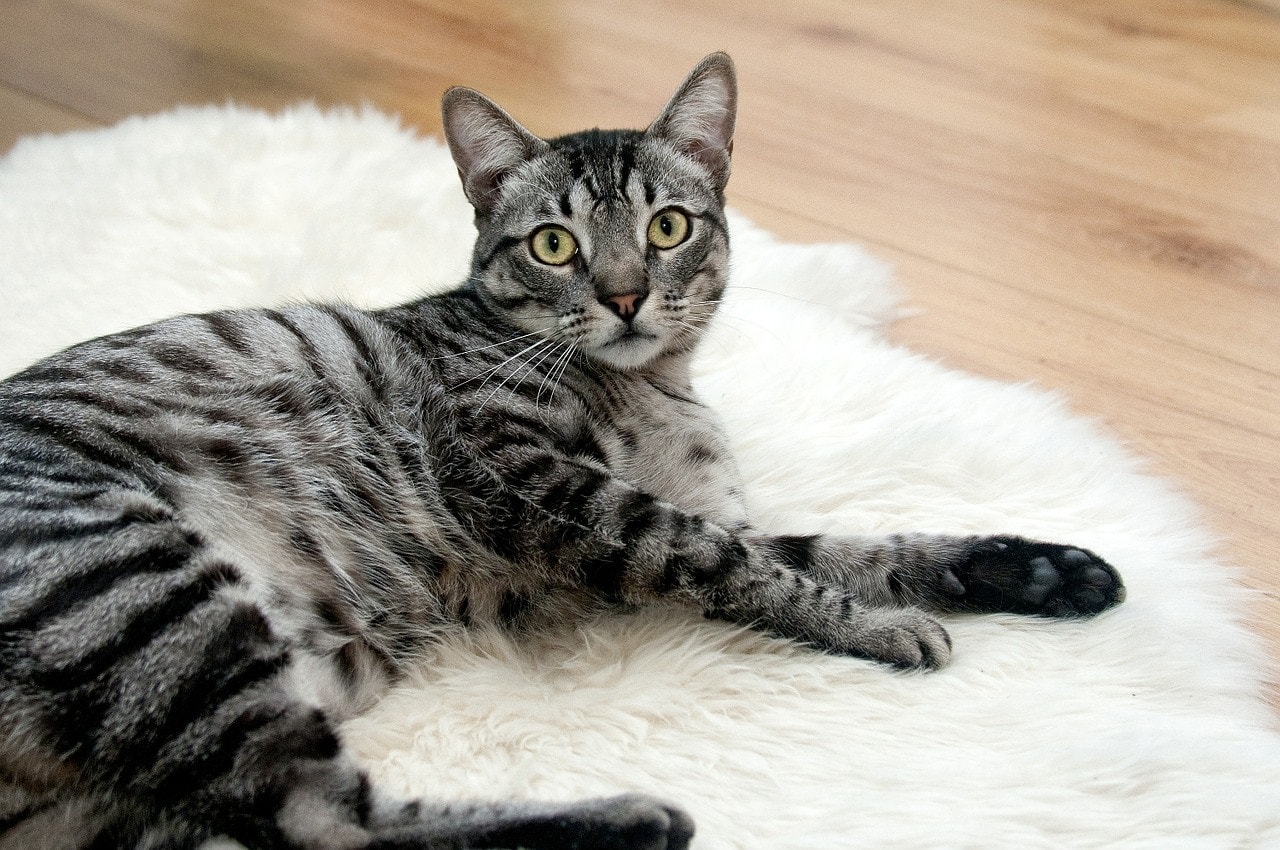 When thinking of house cats, the term “tabby cat” will undoubtedly cross your mind. Interestingly, a tabby cat is not a breed of cat, but a coat type that is found in almost all genetic lines of domesticated cats.

The tabby coat pattern has the very distinct “M” shaped marking on the forehead and can come in a variety of coat colors with similar-looking patterns that resemble stripes, swirls, dashes, and dots. The tabby coat is recognized as a breed standard coat type in over two dozen cat breeds.

The Earliest Records of Tabby Cats in History

Research has been conducted and found that the tabby coat type likely emerged in the Middle Ages but did not become popular until the 18th century.  It can be difficult to track down a solid factual history of a specific coat type, but scientists have been using DNA analysis to do so.

They likely get their pattern from their wild counterparts that use the tabby pattern as camouflage to hide and stalk their prey.

Tabby cats are found in art all throughout human history. There is artwork from Ancient Egyptian times that resemble what looks like a tabby cat with the Egyptian Sun God, Ra. Scientists have been conducting studies to track the geographic location of domesticated felines throughout history, including tabby coat types.

Tabby cats have been popular throughout history. From the Middle Ages, the Victorian Era, and all the way into modern-day society, you can find the tabby cat etched in history throughout the timeline.

In the Egyptian “Book of the Dead,” the sun god, Ra, looks to have a tabby cat as company.  A Victorian Era painter named Horatio Henry Couldery used tabby cats as his inspiration for many famous paintings.

The Broadway musical Cats has Munkustrap, the silver tabby, and we all know of the famous orange tabby cat, Garfield from the newspaper comics. Created by Jim Davis, Garfield gained popularity when he hit comics in 1978 and has grown continuously ever since. The gluttonous, lasagna fiend became a household name and made his way from comics to television and movies.

Tabby cats are among the most popular non-breed domestic cats in the United States. It’s not uncommon to see at least one tabby cat in a multi-cat home.

Brown tabby cats have solid brown fur on their paws and ears. Their stripes can vary in color from brown to black with tan, cream, and white mixed in typically near the underside with occasional white patches on the chest and paws. This may be the most common tabby coat type that comes to mind.

Calico is another coat pattern that is commonly mistaken for a cat breed. If a cat has the three colors of orange, white and black, making it calico and has the distinctive “M” marking on their forehead, they are considered the calico tabby. This type can also have random tabby stripes on the body as well. Just because a cat is a calico though, does not mean it is also a tabby.

The classic tabby will have distinct stripes on their head and face with swirls of dark coloration on the lighter base color that covers the body. The swirls on a classic tabby resemble a marble cake and are typically very large and unique.

The mackerel tabby is sometimes referred to as the Tiger Cat. They have a solid dark brown to black stripe along their spine with stripes that branch off that stripe. Because this pattern so closely resembles a fish skeleton, it was given the name mackerel.

The orange tabby can vary from different shades of light orange to red. Interestingly, all red or orange cats will have the tabby coat type because the gene that carries the tabby pattern also carries that coloration. The most popular orange tabby of modern society is the lasagna-loving Garfield from comics and cartoons.

Silver tabby cats come in varying shades of silver and gray. They will have darker gray spots and stripes that sit on top of a lighter-colored coat. The silver tabby coloration ranges from nearly white to extremely dark gray.

Spotted tabby cats will have the facial markings of the classic tabby but oval and/or round spots along the body. Ocicats and American Bobtails are two popular breeds found in the spotted tabby coat coloration.

Ticked tabby cats are commonly referred to as the Abyssinian tabby. This coloration is the least recognizable version of the tabby cat. They tend to have the facial markings of a tabby, but the rest of their coat looks solid. You will have to look at them up close and under light to distinguish the tabby pattern on the body.

Tortoiseshell tabbies can be hard to recognize. The tabby pattern is generally only seen on the legs and face but because tortoiseshells are so densely covered in blotches of color it can be difficult to distinguish. The tortoiseshell coloration comes in reddish-orange and black with the occasional presentation of hints of cream or gold.

Many cat breeds recognized by the Cat Fanciers’ Associated accept the tabby coat type as part of the breed standard. Not all breeds recognize every variation of tabby cat. Some offer recognitions to many color and coat variations while others will recognize just a few or even just one type.

Breeds That Recognize the Tabby Pattern by the Cat Fanciers’ Association

1. The Tabby Cat Is the Official Cat of Massachusetts

As of July 11, 1988, the tabby cat was named the official cat of the state of Massachusetts per the wishes of the school children in the state.

Famous Victorian Era painter and animal artist, Horatio Henry Couldery used tabby cats as inspiration for many portraits he painted. He depicted tabby cats as being curious, mischievous, gluttonous, and loveable little creatures. He lived from 1832 to 1918.

3. The Tabby Coloration Begins in the Skin of a Cats Embryo

4. Tabby Cats Were Named After a Silk Made in Baghdad

Tabby cats get their name from a type of silk from Baghdad, Iraq. It is claimed that this silk came from the region of Attabiy in Baghdad. In the 14th century the silk was referred to as “atabis”, then eventually “tabis” and was eventually translated into English as the word, “tabby.”

5. The World’s Heaviest Cat was a Tabby

The world’s heaviest cat was a tabby named Himmy, weighing 46 pounds and 15.2 ounces. Himmy made it into the Guinness Book of World Records as the world’s “fattest cat” but had the title removed after his passing. The Guinness Book of World Records took away this award to prevent owners from intentionally making their cats unhealthy to top the world record.

Does the Tabby Cat Make a Good Pet?

Tabby cats are known for being intelligent, friendly, and very affectionate. Not only do they make great household pets for cat lovers, but they also tend to make great hunters and will do their duty as mousers.

Tabbies are known for enjoying cuddle time and for being a bit cantankerous if they don’t get their way. Their keen intelligence comes with curiosity and mischievousness. You can expect some crazy antics if you choose to bring a tabby cat into your home. On the upside, this can provide great comic relief.

Like most of us, tabby cats love food. They will go to great lengths to maintain a meal they have their eye on so don’t be surprised to find cat prints on your counters.

Tabby cats have a reputation for being friendly and social and biologists believe it may be linked to the DNA of the tabby coat pattern. Keep in mind the different breed variations as well, they come with their own specific traits if you’re looking into purebred cats. Regardless, tabby cats truly do make great pet cats!

Tabby may just be a coat variation, but these cats come with a long history and a great reputation. Even though tabby isn’t a specific breed, it is the most popular cat in the nation and quite possibly the world.

If you choose to bring a tabby cat into your home, you’ll undoubtedly have a wide variety of patterns and color choices to choose from. You can even find breed-specific tabby cats. Overall, these loveable, uniquely patterned cats make great companions.