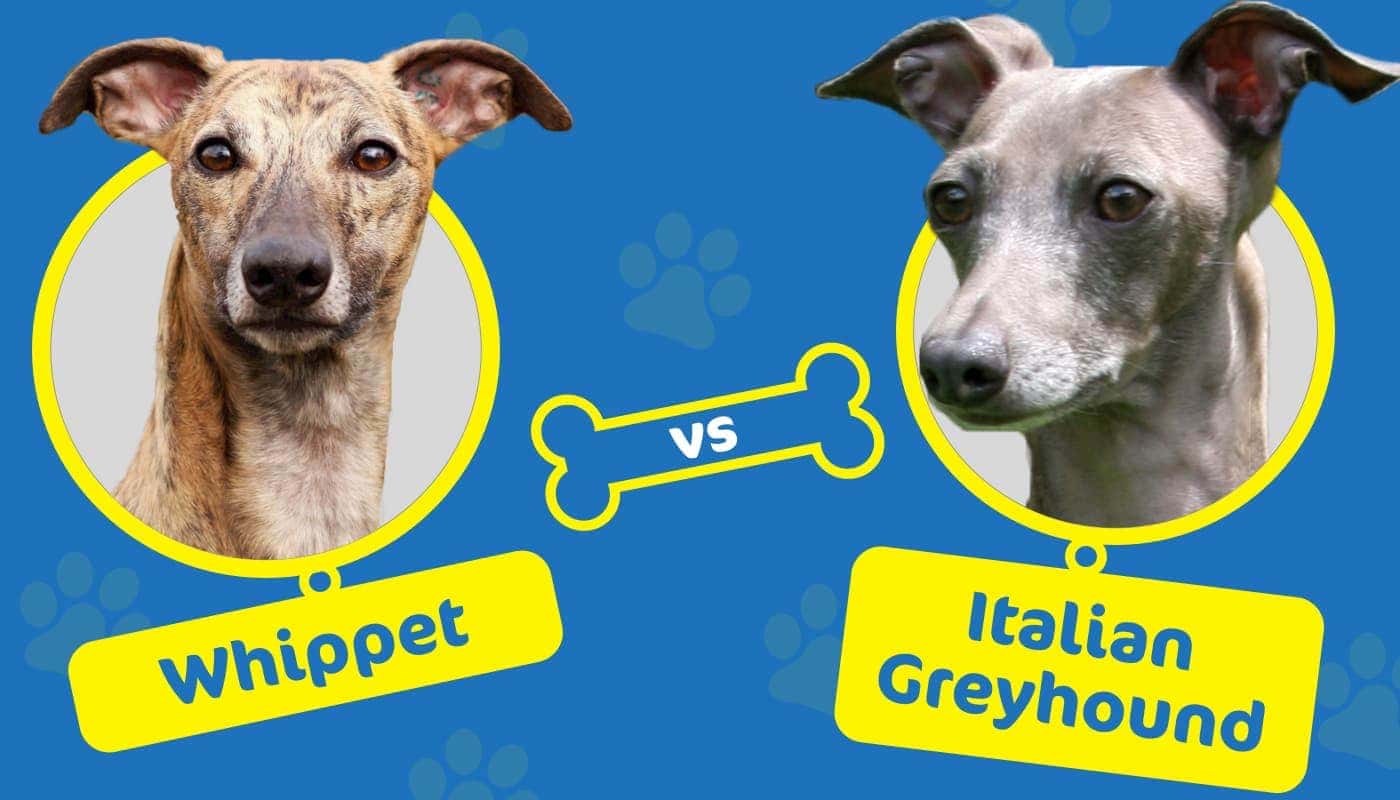 Some dogs are so dissimilar that it’s a wonder they’re even the same species (Chihuahuas and Great Danes come immediately to mind). However, some breeds are so much alike that it takes a trained eye to tell them apart.

Whippets and Italian Greyhounds definitely fall into the latter category. Both are lithe, lean sighthounds that are capable of running at astounding speeds, but there are ways to distinguish the two dogs.

The most obvious is the size, as Italian Greyhounds are significantly smaller than their Whippet cousins. The differences run much deeper than that, though, and we’ll explore the most prominent ones in this article.

Whippets are gentle and devoted creatures, and they only have two settings: “warp speed” and “nap.” They will need at least an hour of serious exercise, but after that, they will likely spend the rest of the day dozing around the house.

You can generally buy a Whippet pup for between $1,000 and $2,000. They’re expensive because many of the animals have purebred bloodlines, as they’re often used for sport.

Whippets are calm, graceful creatures — as adults. They can be holy terrors as puppies, though, as they love to race around the house and destroy anything that gets in their way.

Once they settle down, you’ll have a loving, affectionate dog that enjoys lazing around. They’ll still want to get their zoomies out, of course, but you can generally get that over with in less than an hour a day.

They’re equally suited for apartment living or country life, although they don’t do well in harsh environments. You’ll want to keep your Whippet indoors as much as possible.

They also need to be somewhat pampered. They don’t have enough meat on their bones to lay on hard surfaces, so you’ll need to provide them with plenty of beds or pillows to lay on (or sacrifice your own).

Whippets are particular, fastidious creatures, and while they can get along with children, they generally prefer to avoid the chaos that very little ones create. Still, they’re more than happy to romp around the yard with kids any chance that they get.

Whippets are whip-smart, so they’ll pick up on commands quickly. That doesn’t necessarily make them easy to train, however.

These are independent dogs, and they’ll ignore your commands if they feel that they have better ideas than you do. This means they often require experienced owners who are confident in their training abilities.

They’re sighthounds, so they can easily get distracted by visual cues like squirrels, birds, and other animals. You’ll need to be more interesting than the world around them, or you’ll get ignored.

On the plus side, they’re incredibly easy to housetrain, as they’re generally clean dogs. They don’t want to be around their waste any more than you do, so they’ll happily find a spot outside the house to take care of business.

Whippets are generally healthy dogs, although they are prone to eye issues. You should take them in for regular checkups just to make sure you catch any issues before they become big problems.

These dogs are naturally thin and delicate and should remain that way. Owners should be careful not to overfeed them, as extra weight will put a ton of added stress on their fragile bones. Ideally, you should be able to feel their ribs without them being too noticeable.

Whippets should be fed a high-protein diet with strict portion controls. Free-feeding is generally frowned upon, as they’re prone to overeating if given the opportunity.

These pups have short coats, and they’re not suited for extreme weather. If you have to take them out in the cold, they should wear a sweater and booties. Booties are also recommended for walks in extreme heat.

They don’t require frequent coat brushing, and the only regular grooming that you’ll have to worry about is trimming their nails and brushing their teeth.

Whippets are loyal and affectionate, and they’re fairly low maintenance if given the proper amount of exercise. They can be equally at home in apartments or homes with large yards, and they don’t enjoy being alone, so they do best with families that can devote a great deal of time to them.

These dogs were bred to be sighthounds, though, so they may not be ideal for homes with cats and other small pets. Additionally, they can be difficult to train, so first-time owners may want to find a more agreeable pooch.

Italian Greyhounds are definitely not hardy creatures. They prefer to live the pampered life indoors, and they’ll repay you by offering love and affection without making many demands in return.

These dogs cost roughly as much as Whippets, with prices ranging from $1,400 to $2,000. This breed isn’t common, and due to their fragile nature, it takes an experienced breeder to raise them properly.

Italian Greyhounds need plenty of companionship. While most dogs are affectionate, these pups can be downright clingy, and they’re especially prone to separation anxiety. If you can’t spend much time with your dog, then this isn’t the breed for you.

That’s not to say that they’ll offer love to just anyone, however. They tend to bond intensely with their families, while being aloof and wary around strangers. They’re generally not prone to aggression, but they won’t greet your guests with a wagging tail either.

You should take care not to let them bond with just one member of your family, though, as that might lead to them becoming protective. Every member of your household should take turns playing and cuddling with your Italian Greyhound.

You have to be careful how you handle them, as they can be quite fragile. As a result, they’re often not a good choice for homes with very small children who haven’t yet learned how to properly interact with dogs.

Despite their diminutive size, they actually make fairly decent guard dogs. They’re not a yappy breed, as they have a full-throated bark, and they’re not shy about alerting their owners to danger.

These dogs are fairly intelligent and can pick up new commands easily. However, they also tend to have stubborn streaks, so they won’t always cooperate even if they know what you want them to do.

Like Whippets, these dogs are easily distracted sighthounds. You may want to conduct your training sessions in a quiet room indoors, at least until they get the hang of most of the concepts.

Their stubborn and easily distracted nature makes them a somewhat challenging dog for new owners to train, so it’s best if you have experience under your belt before bringing one of these pups home.

Italian Greyhounds have extremely fragile frames, and they can easily be injured by kids or other dogs during rough play sessions. In fact, these dogs are notorious for hurting themselves by jumping off couches or attempting other things that normal dogs can do with ease.

Beyond that, they’re a fairly hearty breed, but they are predisposed to a few different health issues. They often suffer from alopecia and other skin issues, and their eyes are as sensitive as the Whippet’s.

They can also fall victim to thyroid conditions and epilepsy, although these are less common than the aforementioned problems.

Grooming these dogs is easy. They only need to be brushed once a week at most, and they rarely shed. You should trim their nails as needed and brush their teeth regularly, the same as you would with any dog.

All in all, Italian Greyhounds are a fairly low-maintenance breed, so long as you’re careful not to handle them too roughly.

These dogs make excellent companions for apartment dwellers, as they’re perfectly happy to sit next to you on the couch all day. They do need a bit of vigorous exercise, but it’s nothing that a short romp at the park won’t fix.

They also do well with people who can spend a considerable amount of time with them. If you don’t want a clingy dog semi-permanently Velcroed to your side, the Italian Greyhound will likely be a poor choice for you.

Due to their fragile frames, they’re not ideal for families with small children. If you insist on bringing one home, anyway, be sure to teach your kids how to handle the dog, and always supervise them when they’re together.

Which Breed Is Right for You?

Whippets and Italian Greyhounds are similar dogs, so if you’re interested in one, you’ll probably enjoy the other.

Perhaps the easiest way to make the decision is simply to ask yourself whether you want a small or medium-sized dog. If you enjoy little, non-yappy breeds, the Italian Greyhound will be a great choice. If, however, you want something that you won’t accidentally sit on, the Whippet is the way to go.

Beyond that, you’ll find that both breeds offer many of the same strengths and weaknesses. Perhaps the best way to choose is simply to take whichever dog is available at your local shelter! 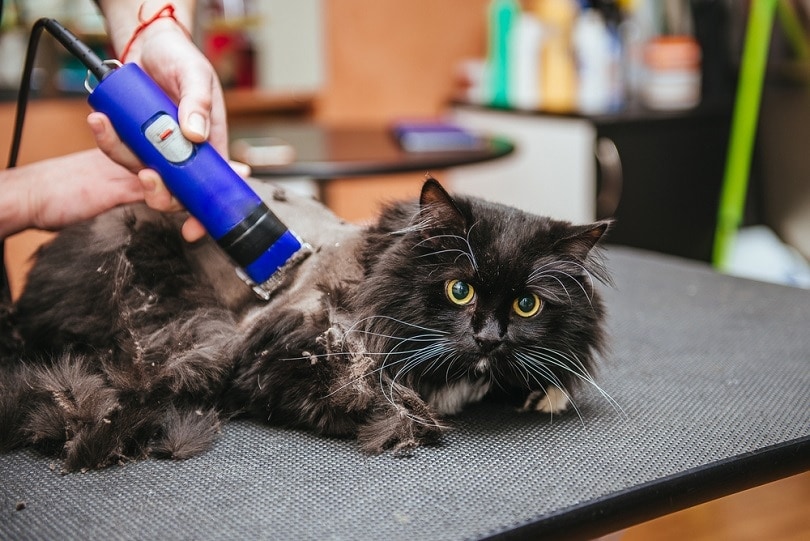 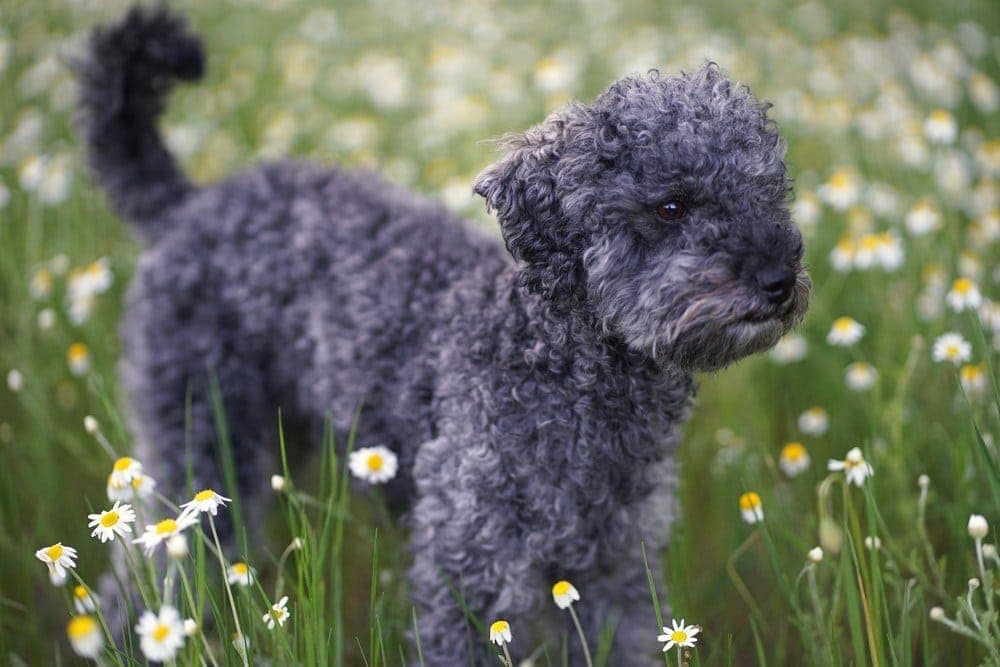 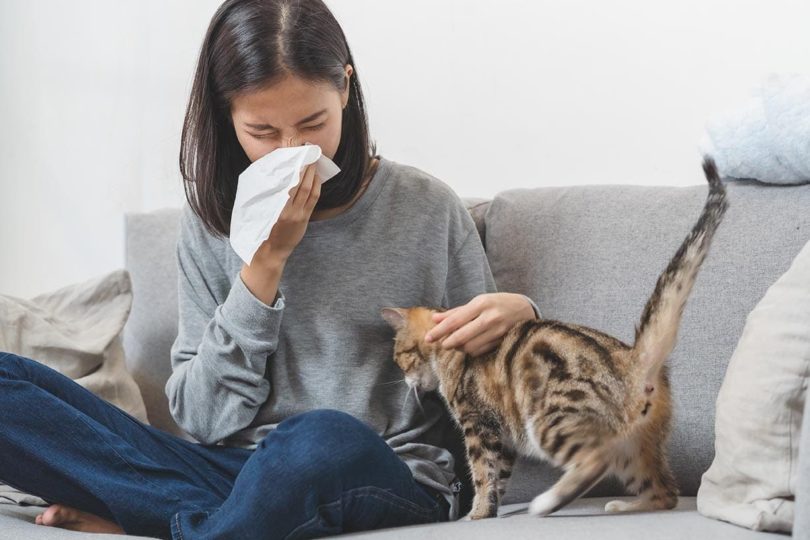 Are You Allergic to Cats? Learn About Common Cat Allergy Symptoms 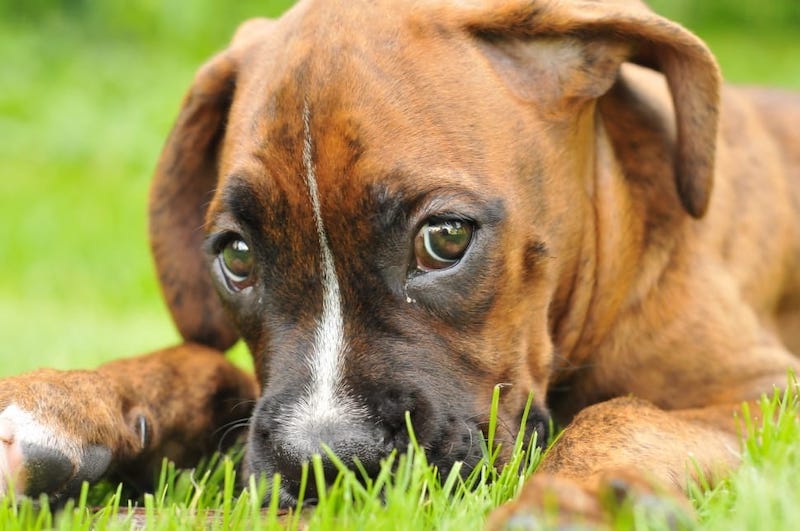