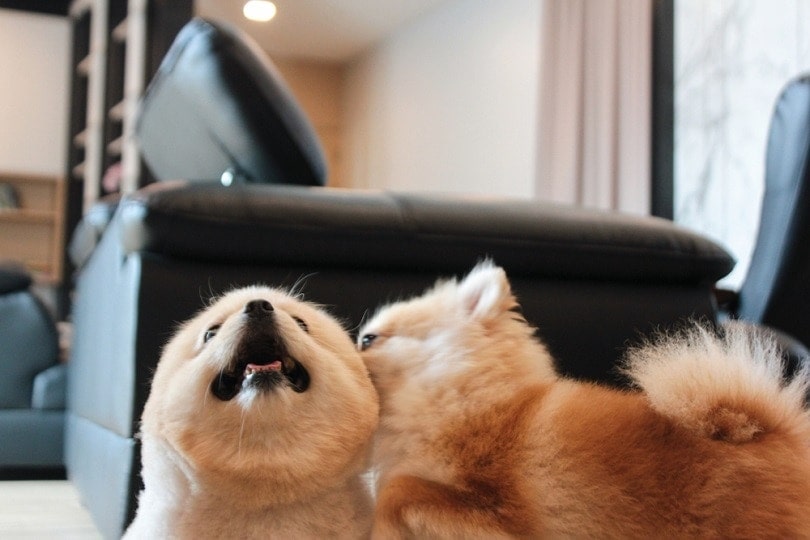 Have you ever noticed that your dog licks other dogs’ faces? To humans, this mannerism seems a bit odd since licking someone else’s face is the quickest way to get a stern slap. For dogs, however, face-licking goes back to their puppy stage, and it is often a sign of respect.

Currently, experts believe there are three possible reasons for this behavior. All of these reasons go back to how puppies interact with their mother in the wild. These reasons also explain why your dog likes to lick you and other humans! Read on to learn about this behavior and what you can do to deter it.

The 3 Reasons Why Your Dog Licks Other Dogs’ Faces

If there’s one thing true about dogs, it’s that they all love a good snack and meal. Most experts believe that dogs’ desire to lick another’s face goes back to how wolf puppies express hunger pains in the wild. Although your dog is not a wolf, it is a descendant and shares much of the same evolutionary background.

Because wolf puppies expressed their hunger pains by licking their mother’s mouth, many experts believe that the behavior is ingrained in all dogs, even as they age. That is not to say that you are starving your dog or that your dog is hungry every time they lick another’s face. It simply means that the behavior has been biologically programmed in them from an early age.

Even though adult dogs are biologically groomed to lick faces out of hunger pains, it seems that they use this behavior in other ways as they age. Most notably, dogs seem to lick other dogs’ faces, as well as human faces, to solicit attention.

Much like the first reason for the behavior, this reason also goes back to your dog’s wolf puppy roots. Whenever puppies want attention from their mother, whether it be from hunger or otherwise, they would lick their mother’s face. Many puppies continue this behavior well into adulthood, but they would do it to other dogs, not just their mother.

If your dog seems to only lick faces whenever it is playing and begging for attention, it is likely doing it to solicit attention, nothing more. It seems that most dogs today lick faces for this reason than the other two.

Finally, the last reason that dogs may lick each other’s faces is as a sign of respect. Wolf puppies seem to lick their mother’s face out of respect. Adult wolves, however, seem to do this same behavior to dogs other than their mother.

It may be helpful to think of this behavior as the dog equivalent to saying please or talking to a superior. Licking another dog’s face is a subordinate position, which tends to solicit care and protection from older or more powerful dogs. You might notice your dog doing this if you have multiple dogs, one of which is clearly the Alpha over the rest.

How To Stop Your Dog From Licking Dog Faces

Because dogs have been programmed to lick each other’s faces from the time they’re born, it is incredibly difficult to discourage this behavior. Plus, this behavior is not aggressive and is seen as respectful in dog communities. For this reason, there is not a whole lot of reason why you would want to get rid of this behavior in the first place.

If you notice that your dog is constantly licking, you may want to do something about it, nonetheless. Although you might not be able to completely eradicate this behavior, there are some things you can do to lessen it.

The most effective way to get your dog to stop licking at other dogs’ faces is to distract them. Find their favorite toy or treat to simply draw their attention away from the other dog. Once you get your dog’s attention, your dog may start licking you more than other dogs.

When it comes to eradicating a biologically programmed behavior, training may be incredibly difficult, even with a dog that is generally easy to train. You can try to train your dog to stop the behavior but be forewarned that the task will be difficult.

Because licking faces is a behavior dogs do to be rewarded, you will need to find a way to show them that they will be rewarded elsewhere. For example, you can try to teach them that the number one way to get what they want is to grovel to you, not other dogs.

You can do this by distracting them first. Every time your dog comes to you, you need to praise them and give them treats. This will show them that coming to you will get them the award and attention they’re searching for.

If you train them in this way, they will stop licking other dogs as much, but they will start licking you more. That’s because training them not to lick other dogs simply redirects their reward system to you. If you don’t want your dog to lick you very much, you should let them lick other dogs instead.

Domesticated adult dogs seem to lick each other’s faces because of their wolf puppy roots. Most likely, your dog is licking a dog’s face in order to solicit attention, but it could be a sign of respect or from hunger pains too.

You can try to discourage this behavior by distracting your dog and training it against the behavior, but we do not recommend this. Because dogs are biologically predisposed to this behavior, discouraging this behavior will be next to impossible.

Plus, this behavior is not aggressive or something that is generally considered unwanted, unless it gets out of hand. With the exception of dogs who are over fascinated by licking, licking allows them to socialize with dogs in a way that is respectful to other canines. The last thing you want is to train your dog to be socially awkward!

How Much to Feed a Dachshund?

How to Help Your Grieving Dog Cope With Loss