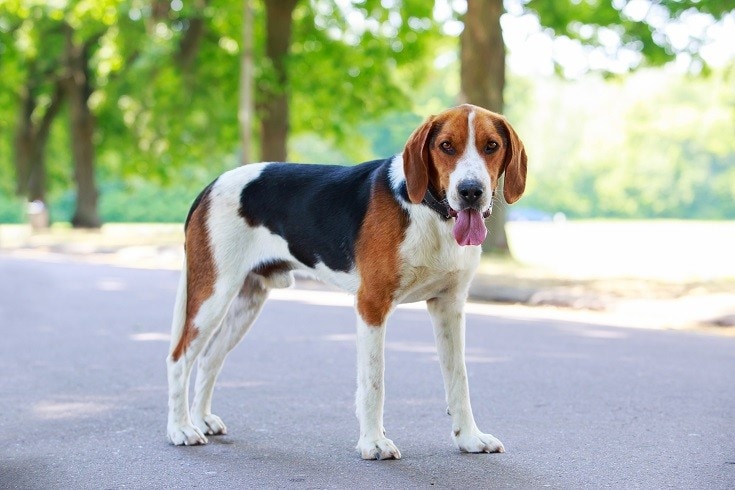 American Foxhounds are quite similar to their English cousins, but they have longer, thinner legs with more arch in their rear. These traits make them faster and more agile when traversing the rough terrain they were bred to cover in America. As the name suggests, Foxhounds were bred originally for hunting foxes, which is why they needed to be quick and swift.

These dogs are graced with a short, hard coat that protects them from underbrush while on the hunt. They also have independent natures that are well-suited to long hunts alone chasing prey. They’re purpose-built dogs that excel at hunting, but they can still make incredible companions under the right conditions.

American Foxhound Puppies – Before You Get One

Truthfully, these dogs have some traits that make them great pets, like their easy-going demeanor, their loving affection, or their playfulness. But if you want to keep one as a pet, you’ll have to work hard to temper the traits that make them such great hunters. For instance, their high energy levels and endurance need an outlet, so you’ll need to spend about two hours each day exercising your American Foxhound. Neglect this and you can expect a depressed, destructive Foxhound destroying your yard, home, and your peace.

Foxhounds have been around for a very long time. Back in 1650, some of the English Foxhounds were brought to America where they were mixed with some French Foxhounds to create the “perfect foxhound.” The breeder who did this crossing was none other than George Washington, one of the founding fathers of America.

It’s difficult to say for certain, but the evidence points to this breed being the first one officially created on American soil. And it’s sure hard to get more American than being bred by the first president of the United States!

2. Their noses can get them into trouble.

Foxhounds, like all scent hounds, have incredibly powerful noses that can detect smells from very long distances. This is obviously quite useful when hunting, tracking, and chasing prey. But it can also get them into trouble when they’re not on the hunt!

That powerful nose can easily detect smells from far off that you’re unaware of. The Foxhound’s curious nature will soon have them searching for the source of that scent that’s caught their nose. This can lead to lost pups who are always trying to escape. If you’re going to keep your Foxhound outside without supervision, you’ll need to make sure that your yard is secure.

3. There are four types of American Foxhounds.

Field-trial hounds are highly competitive, agile, and very fast. Fox-hunting hounds are slower with loud, musical voices and strong noses. The trail hounds are used for racing after artificial lures as a sport. And finally, hunters on horseback will use packs of pack hounds for hunting.

Temperament & Intelligence of the American Foxhound 🧠

American Foxhounds are very smart dogs. They’re also incredibly friendly and loving. This breed is known for their easy-going attitudes that help them to get along with just about everyone. But they can also be quite independent; a trait that’s very beneficial for a hunting dog.

These dogs aren’t demanding, but they do want your attention. They prefer to be kept indoors with you, except for the several hours each day you’ll need to spend exercising them. Because of their impressive work ethic, endurance, and energy, these dogs need tons of exercise. If they don’t get enough physical activity, American Foxhounds quickly become destructive and depressed. This is when you’ll start to see behaviors like bawling, digging, whining, chewing, and worse.

Even though these dogs are perfectly suited for hunting, they can also make great companions if you understand their needs. They are loving and loyal dogs that will stick by your side day in and day out. But it will take a bit of work to get there. They’re best-suited for owners with previous dog experience since they do have special needs above and beyond that of most breeds.

Breeders of American Foxhounds have been known to say that they’ve never seen one that didn’t get along well with children. These dogs are very gentle with kids and make great companions and partners as the children age and they grow together.

Since this breed does need so much exercise and attention, the multiple people in a family can be a huge benefit since all that exercise time can be split among several family members. This can make it much less taxing to own a dog that needs as much special attention as an American Foxhound.

In general, American Foxhounds do great with other dogs that are their size or larger. They can get along with smaller dogs and even animals of other species, but this is going to take some work and socialization.

Remember, American Foxhounds are hunters at heart. They have a naturally strong prey drive that’s going to be quite difficult to break. Early and repetitive socialization can certainly help, but it won’t guarantee that your Foxhound is safe around other pets.

Things to Know When Owning an American Foxhound:

As we’ve mentioned previously, American Foxhounds are an exceptionally active breed. They need tons of physical activity. As such, they also need to replenish those energy reserves. This means that they’re best-suited for dog foods that are specifically engineered for high-energy dogs. These blends will have the right nutrients to replenish what your dog is burning each day to ensure that they don’t become deficient.

Also, keep in mind that your American Foxhound will eat quite a bit of food because of how active they are. Still, you want to make sure you don’t overfeed them so your dog doesn’t become overweight or obese. It’s recommended that you split your dog’s meals into two or three daily feeding times and monitor how much food you’re giving them so you can be sure they’re not eating too much.

If you don’t manage to expend all of your Foxhound’s excess energy, you’re going to have a destructive, whiny, unhappy dog on your hands. At this point, you’re likely to see all sorts of unwanted behaviors.

Because they need so much exercise, this breed is best reserved for very active individuals and families. If you often take long walks, jogs, hikes, bike rides, etc., then the Foxhound might be a good fit for you. You’ll be able to provide all the exercise your dog needs by having them accompany you on your daily exercise outings.

On the other hand, if you’re more of a sedentary individual who’d rather spend time watching television inside, then the Foxhound isn’t a great choice for you.

Foxhounds are smart enough to be trained for hunting, so you can definitely get them to learn commands and more. They do well with obedience training, but they do have a stubborn, independent side that can sometimes be difficult to manage. You’ll need a firm, confident hand when training these dogs, so it’s best if you’ve got some previous experience.

Training will be easiest if your Foxhound can get most of their energy out ahead of time. You’d be best off attempting training shortly after exercising your Foxhound so they don’t have heaps of extra energy making it harder for them to concentrate.

Though American Foxhounds might be high-maintenance in regards to their exercise needs, their coats are the exact opposite. They need very little grooming, thanks to their short, protective coats. They shouldn’t be bathed unless they get into something sticky and stinky. And their coats only need minimal attention. You can simply brush them once a week for a few minutes and it will remove the dead hairs

But Foxhounds do have long ears, so you’ll need to make sure you keep their ears clean and dry. If it gets moist inside their ears, they won’t dry out because they’re covered by those ears. This can easily lead to infections if not taken care of. Just wipe your dog’s ears out with a slightly moist rag once a week, taking care to dry their ears fully once you’re finished.

The American Foxhound is about as hardy as any pure breed. They don’t have many health concerns to look out for, though there are a few that are worth mentioning.

Like many breeds, American Foxhound males tend to be larger and heavier than females. However, the difference is quite minimal. Females can reach heights of 28 inches while the tallest males are just an inch taller. Likewise, the largest males are only a few pounds heavier than the largest females.

American Foxhounds are as American as any breed of dog. They’re likely the first breed created on American soil, and one of the founding fathers of America even played a part in the breed’s start.

These dogs are exceptional hunters with near-endless endurance and strong noses that help them track prey for long distances. But that means they have tons of energy that needs a daily outlet because they can become destructive very quickly if their exercise needs aren’t meant.

Still, they can be amazing companions for individuals and families who are active enough to provide ample exercise by simply bringing your Foxhound along on your runs or hikes. They have a loving demeanor, a friendly disposition, and even get along great with children. Plus, they require very little grooming and maintenance.

Overall, they’re a great dog for any hunter or highly active person or family. But if you hate running, you should probably look somewhere else!